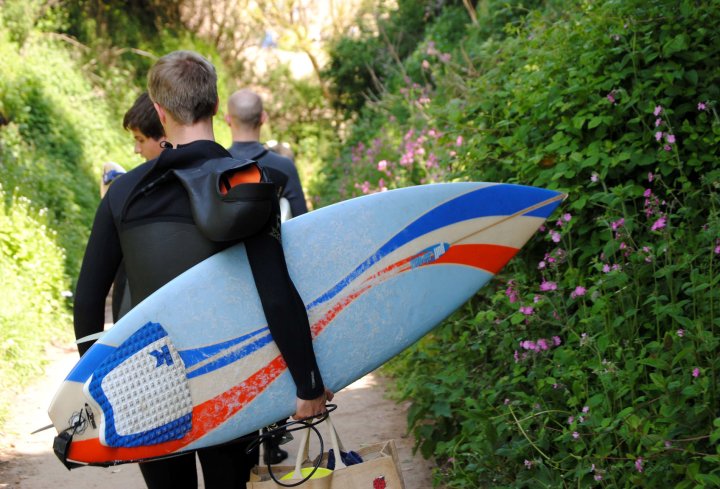 Go grab your surfboards and hit the beach—you’re in England!

Surfboards? That’s right. Though England may seem like a travel destination with only old houses and rolling countryside, there is a budding surfing population that attracts some attention away from the typical histor­ic sites. So move over, Shakespeare: surfing is coming your way!

Traveling to England to surf in the sometimes literally freezing water may not sound appealing, but England offers surprising surfing benefits that may convince you to suit up. For instance, the United Kingdom receives swell (or shore-bound waves) along every coastline, and even the most popular spots are never too crowded.

Miles Jackson and fellow surfers head down the trail to the Putsborough Beach in North Devon, England. The beach is known for having excellent peelers and a wide shoreline. Photo by Kristy Jackson

However, surfing the North Sea isn’t a picnic. Miles Jackson, owner of the online surfboard-shaping business milesboards.com, explains that surfing in the UK can be quite a challenge. “It’s so bloody cold,” says Jackson. “The waves are not as consistent as in other places, but you do get the odd day that reassures you that there is a god in heaven.”

And that’s what keeps him and a growing community of surfers out catching waves every month of the year. Miles and his brother Jeremy Jackson have surfed in all conditions. One spring day, the brothers went out to ride the surf with only one board and wet suit between the two of them. They would take turns surfing and shivering on the beach. While Miles was out in the water, Jeremy recalls that it started to snow. But even that didn’t stop them.

Though this sounds crazy to most people, who picture tropical breezes and ukuleles when hearing the word “surf,” to Miles, surfing is a release no matter what the weather. “I got up, and the stoke [a surfing term for a rush of awe and adrenaline] sunk deep in my soul,” he says of his first time surfing. “From that moment on, there has been this constant hunger to carve it up.”

This bug to brave the freezing sea has bitten a few others as well. One reason these brothers love England surfing is the camaraderie between the fellow enthusiasts. “It’s like a big family,” Miles explains. “You’re just a bunch of fools out there freezing, and you always respect the other guys for wanting the stoke as bad as you—enough to go against logic.”

“In California or Hawaii, telling someone you surf isn’t enough to make you friends,” Jeremy agrees. “But in England, it is something more unique that draws people together. And because it takes more commitment, there is no such thing as a casual surfer.”

Even for beginners, there are several places to carve it up throughout England, since no place is more than 80 miles from the coast. Jeremy says that, unlike the more popular surfing destinations, “you don’t have to pin down a local and drag out of them where their secret surf spot is. You go to the major surf spots, and you still have room to try new things without getting your waves stolen by someone who is better than you.”

With the availability of waves and unique camaraderie among the few surfers, there couldn’t be a better time to shake up a typical visit to the home of Shakespeare with a day of catching some waves!