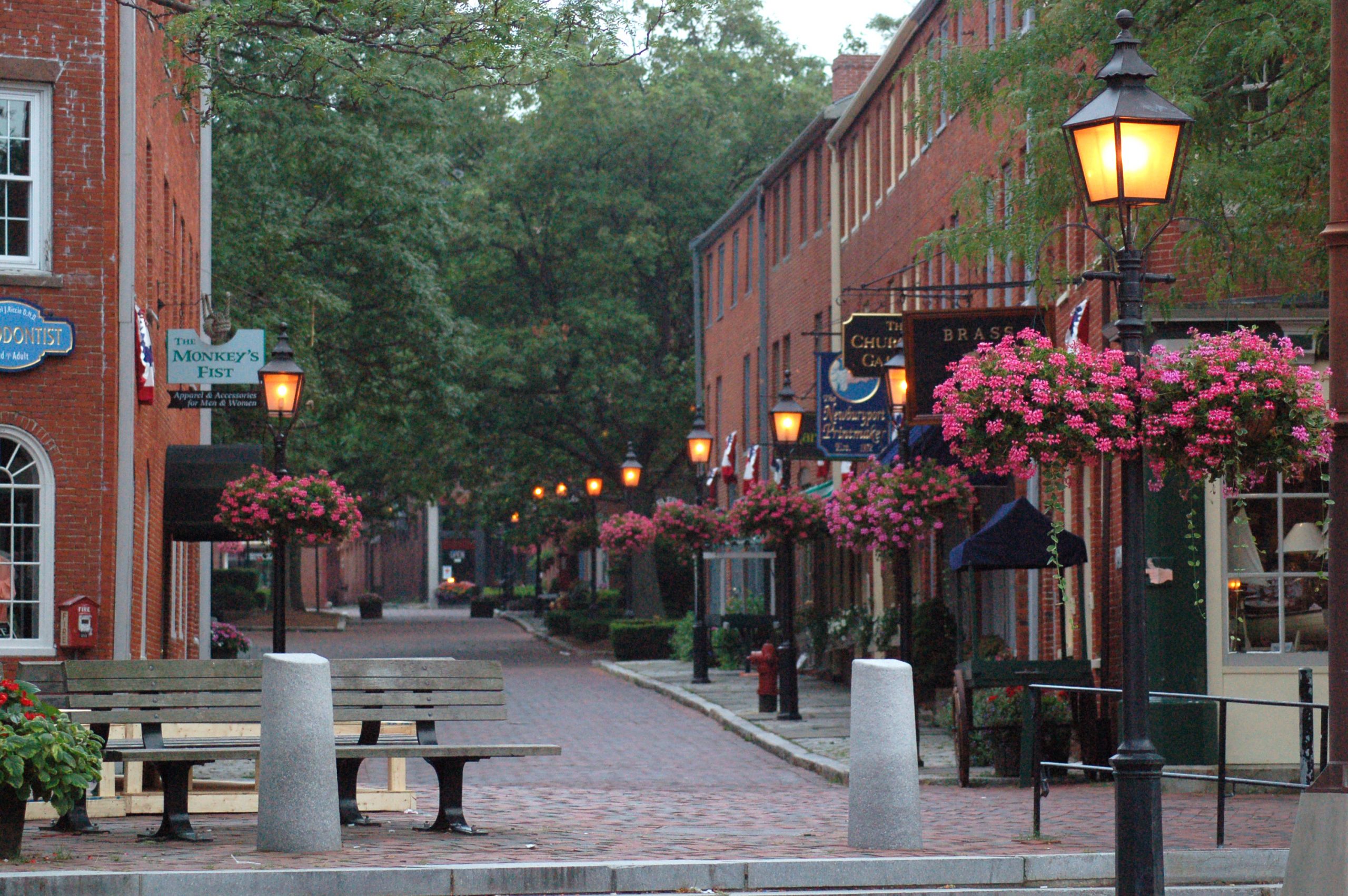 Catch a glimpse of the quaint shops of downtown Newburyport as old lamps and hanging flower baskets line the streets. Photo by Eva Koleva Timothy

It was late, and my friend and I had driven almost 2,000 miles when we pulled off Exit 57 along I-95 in northern Massachusetts. We knew the coast must be near because we were greeted by an all-encompassing blanket of fog. Determining our whereabouts and the direction we were heading was difficult, but the glow of porch and traffic lights seemed to guide us to our destination.

Our imaginations went wild between the patches of darkness as Federalist mansions, charming inns, and towering steeples appeared and vanished within the fog. I wasn’t sure if exhaustion was altering my perception of reality or if I had traveled back in time. I found it ironic that the road we were traveling on was called “Storey Avenue” because it felt as though we were being led into a magical story land. Little did I know that Newburyport, Massachusetts, would have even more to offer in the daylight.

We walked downtown the next day on the cobblestone streets and savored the aromas coming from local eateries and bakeries. The whimsical backdrop of redbrick buildings, pleasant window-shops, and art galleries added to the historical ambiance. This city prides itself on its rich history—and it has the credentials to prove it. It is the birthplace of the United States Coast Guard and home to more than 15 historical sites, including the Old South Church, which houses a bell made by Paul Revere.

Minutes away from the center of the city, we found two off-the-beaten-path spots: Plum Island and Maudslay State Park.

Plum Island features a charismatic lighthouse that was built in 1787 and a spectacular beach crawling with wildlife. This area once offered the early settlers their first glimpses of the New World.

A break in the fog reveals the marshlands of Plum Island. Photo by Eva Koleva Timothy

Maudslay State Park offers a glimpse into a different world. Don’t be surprised if you feel as though you are exploring Narnia with its numerous trails and enchanting wooded backdrop. As long as you visit during the summer, you won’t have to worry about running into any evil ice queens.

Of equal caliber to the sites and activities that the city offers, the local residents maintain a genuine hometown feel. Cars stop for pedestrians to cross the street, and attendants at a local gas station still pump the gas for you. “Newburyport is filled with friendly folks and attracts tourists from all over,” says Amanda Doyle, a third grade teacher from New Gloucester, Maine. “Its history and coastal setting make this a great place to visit.”

Newburyport is located on the eastern coast of the United States, directly south of where the Merrimack River and the Atlantic Ocean meet. It is just 35 miles north of Boston and can be accessed by three major highways (I-95, I-495, and Route 1).