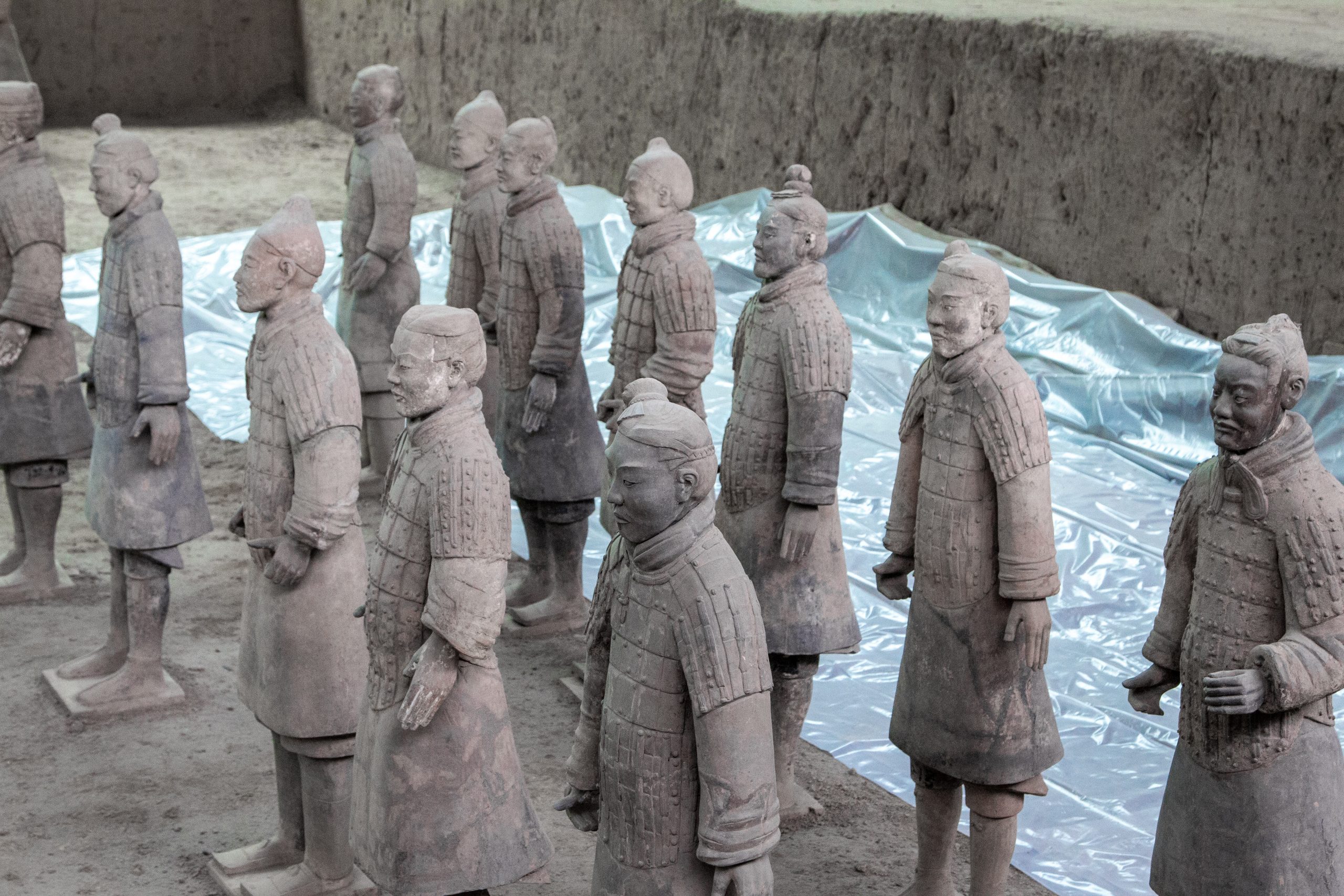 The first silkworm is said to have been discovered by the Chinese empress Leizu around 4000 BC when a silkworm’s cocoon fell into her teacup. The hot tea loosened the fibers, and Leizu was enchanted with the soft, strong thread as she wound it around her fingers. As if she were unwrapping a present, Leizu was rewarded at the end of the thread with a silkworm and learned for the first time the source of this remarkable material.

The discovery of the beautiful, lustrous fibers that silkworms produce led China to hold the monopoly in silk production for the entire world. China kept its method of silk production secret for over 3,000 years at the envy of other nations who sought for ways to bring silk to their homelands. During this time, silk was considered more valuable than gold. The trade route that Chinese merchants traveled to distribute silk and other goods became known as the Silk Road. Formally established as a trade route during the Hang Dynasty in 130 BC, the road welcomed merchants and travelers alike by connecting China and the Far East to the Middle East and Europe.

Travelers began visiting China with the hope of sneaking a few silkworms back home, but these hopes were in vain. The extreme economic profit that silk brought to the nation led China to create an imperial decree that condemned anyone who was caught smuggling silk or silkworms out of China to death. Guards lining the Silk Road would execute travelers if silkworms were discovered among their possessions.

China’s exclusive access to silk came to an abrupt end in the year 552 AD when the Byzantine emperor Justinian sent two monks into the country to steal silkworm eggs. The monks hid the stolen silkworms in the hollows of their walking sticks, smuggling the worms past the guards on the Silk Road. They made their way back to Europe with their illegal stash, and silk production was soon opened to the rest of the world.

The original Silk Road began in what is now Xi’an, China, and divided into three separate paths once it reached Dunhuang, China. The three routes gave travelers access to faraway places like Pakistan, India, and Rome. The road was used by travelers and merchants until 1453 AD when the Ottoman Empire boycotted trade from China and closed the route. Before then, it served as a booming trade route for silk, spices, livestock, precious stones, and technological advancements.

Although merchants no longer need to use the Silk Road to sell goods or share ideas, the original route can still be traced on a map. Travelers today can make the same journey and visit the many booming cities that were developed thanks to the traffic of ancient silk merchants.

Visitors can walk in the footsteps of famous travelers like Marco Polo and Gan Ying by traveling the entire length of the Silk Road, or they can opt to explore the road city by city. Here is a peek at some of the most popular places to visit when traveling along the Silk Road.

What better place to visit than the location that started it all? Xi’an was the capital of China when

the Silk Road began to grow as a trading route. Tourists can visitancient Buddhist temples or see the infamous terracotta warrior statues. These life-size statues, built in 200 BC, were one of the most important archaeological finds of the twentieth century, and they represent the wealth that was brought into China during the era of silk trading.

Istanbul (formerly Constantinople) is a transcontinental city that spans both the Sea of Marmara and the Black Sea. The city’s location made it a very popular spot for trade in the days of the Old Silk Road. Merchants could travel to Istanbul by sea, buy and sell their goods, and take off to their next destination.

In the days of the Ottoman reign, the Grand Bazaar was established to ensure Istanbul’s standing as a central location for trade, and it is still held to this day. Those who travel along the Silk Road should consider stopping by the Grand Bazaar to buy Turkish coffee, spices, or silk goods from the merchants there.

The city of Tbilisi did not become a prominent stop along the Silk Road until the sixth century AD. Despite being late to join the Silk Road route, merchants who settled in Tbilisi found great success in doing so. Travelers today can view the ancient mansions built by those who made their fortune in the carpet shops. The country’s climate is also perfect for growing mulberry trees, which serve as a primary food source for the coveted silkworm. The story of Georgia’s silk cultivation can be viewed in the State Silk Museum, which houses an impressive collection of cocoons and silk materials from around the world, as well as extravagant handmade tapestries and carpets.

In addition to the secrets of silk production, the technique of papermaking was shared among nations via the Silk Road. When this art reached Samarkand, the locals improved upon the trade and created silk paper from mulberry bark. This paper created a new demand, and local merchants shipped their product worldwide on the Silk Road.

Today tourists visit Samarkand to set foot inside of the Bibi-Khanym Mosque, the city’s most important landmarks. They can also visit the Registan, also known as the heart of this ancient city. This thirteenth-century city square has been restored to its original splendor and is a travel hub for visitors interested in ancient architecture.

Where Would You Go?

With so many stops along the Silk Road, deciding where to visit can be a daunting task. Consider consulting a travel agent or signing up for a guided excursion that will lead you through many stops along the way. One thing is for sure: no matter where you decide to go, you will find rich culture and history at every stop.