Halloween Traditions Around the World 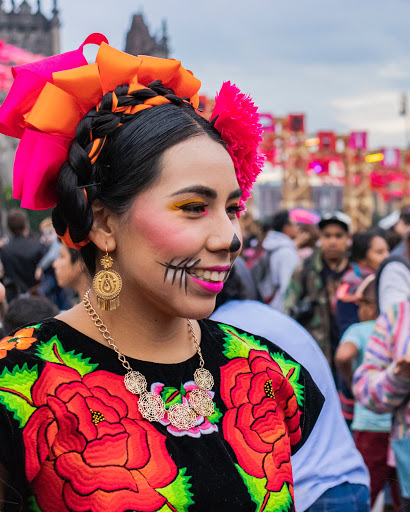 The festival Samhain in Ireland and Scotland is considered to be the birthplace of modern Halloween with its origins in ancient Celtic rituals. The day is celebrated by lighting bonfires and playing games. At night, children dress up in costumes and go door-to-door trick-or-treating, although some children play a game called knock-a-dolly, where they knock on the door and then run away. A key tradition during Samhain is eating barmbrack, a fruitcake that contains a treat that can be used for fortune-telling, such as a ring, buttons, or coins.

In Mexico, and other parts of Latin America, they celebrate Día de los Muertos—Day of the Dead. Beginning on October 31 and continuing until November 2, Día de los Muertos celebrates those who have passed away as their souls are reunited with their families. The holiday is celebrated by the family building altars filled with food, water, toys, alcohol, and pan de muerto (Bread of the Dead). Families will also visit the graves of their families and tell stories about their loved ones. Parades are held and people dress up to celebrate life and death.

Pangángaluluwá is a Filipino tradition that celebrates the dead. This holiday is part of a three-day tradition that centers around the family, with many families cleaning up familial gravesites, enjoying a feast, and lighting pieces of wood near their loved ones’ tombs. At night, children dress up and go door-to-door, singing songs related to All Saints’ and All Souls’, asking for prayers for those in purgatory. In addition, children are often treated to candy and sweets from those they sing to.

Many Hindu people in India celebrate Pitru Paksha during the month of September. During this holiday, the souls of the dead return to their families. Families offer traditional foods like rice, lentils, pumpkin, and kheer (sweet rice and milk) to their deceased relatives. In addition to offering food to their ancestors, Hindus will donate clothes and food to those in need to please their ancestors. An important tradition during Pitru Paksha is to eat only vegetarian foods and to pay respect to your elders.

The Nigerian Awuru Odo festival celebrates the return of the souls of friends and family into the realm of the living. This festival is celebrated every two years, but it lasts for six months, usually between December and August. The festival is split into three stages, each with specific rituals and festivities. During the first stage, there are great celebrations as the dead return to the living. While the dead live among the living during the second stage, there are plays where actors are stock characters that interact with the audience and act out stages of the journey of the dead. These plays are accompanied by music. When the dead leave their families and friends at the end of the festival, it is an emotionally upsetting time, since the festival only comes around every two years.

In Hong Kong and China, there is a festival called Yue Lan (Festival of the Hungry Ghosts) that is celebrated for a month during August and September. The spirits return to the land of the living for a twenty-four hour period. During this festival, people burn pictures of food or money to bring comfort to ghosts. Offerings are given to placate angry ghosts and to comfort familial ghosts. There are parades, operas, offerings of food, and musical performances to entertain and appease the spirits of the dead.

How Halloween is celebrated around the world – Insider

Halloween Traditions and Celebrations Around the World

Halloween Around The World – Traditions, Celebrations …

12 Halloween-Like Traditions From Around the World | Mental …

Pitru Paksha 2020: Significance of offering food to elders on …

Pangangaluluwa: How Filipinos remember the departed …