An ode to pizza Napoletana 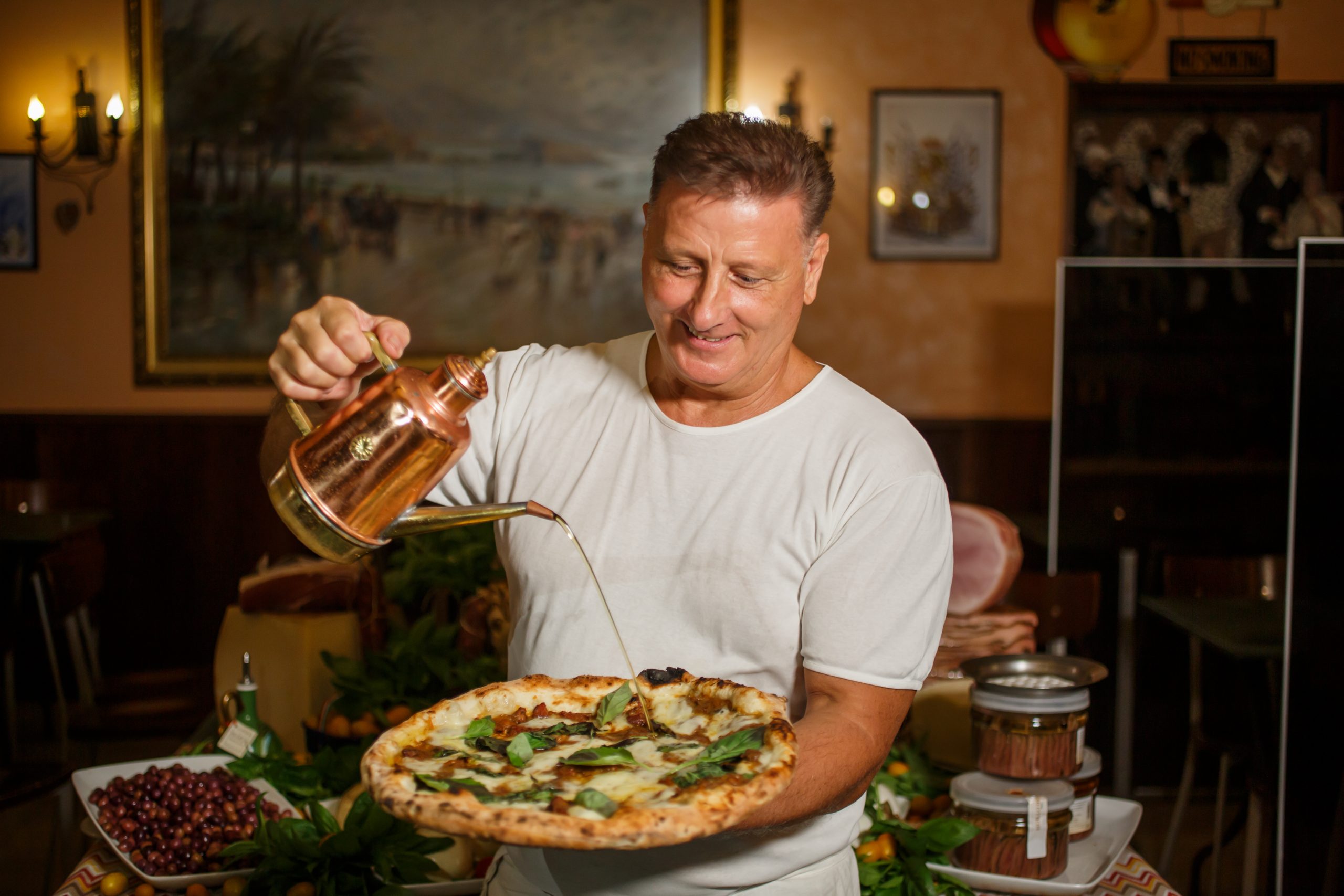 Italy: The land of cobblestone alleys, enchanting small towns, and heavenly food. I was lucky enough to live there for two years, two months of which I spent in an enchanting town just north of Naples. While there, I fell head-over-heels for Neapolitan pizza. I ate it often, sometimes three or four times a week! Safe to say, this pizza accounted for the eight pounds I gained during my time near Naples.

Anatomy of the pizza

Pizza was born in Naples. Su questo non ci piove (translation: there’s no debate)! The pizza is massive, thin crusted, and fresh. Imagine a pizza box larger than usual, with the pizza inside folding up on the edges just to fit. The pizza, usually a margerita or a diavola, is simple: crust, sauce, cheese, and a sprinkle of fresh basil. Add a healthy sprinkle of salame piccante if you ordered a diavola.

Now, a word to the dough. This is no ordinary pizza dough—it’s good enough that it’s often cooked and eaten plain! The toppings are simple and fresh. The sauce is liquid gold—made from locally grown, vine-ripened tomatoes and drizzled with a liberal drizzle of fresh, flavorful olive oil.

In Naples, the cheese of choice is fresh mozzarella di bufala: buffalo mozzarella! This mozzarella, always fresh to within a day or two, is made locally in surrounding towns. It adds a depth and sweetness that simply doesn’t exist in any other pizza. Many pizzerie attempt to recreate Neapolitan pizza by importing mozzarella di bufala, but unless the mozzarella is fresh, the flavor and texture simply can’t be the same.

To eat like a local, first plan to finish off an entire pizza yourself. They’re huge, but the thin crust makes it manageable. Second, fold your slice in half. If you don’t fold it, you’ll find yourself struggling to maneuver the somewhat floppy slice into your mouth as the toppings start to slide off and it all goes to heck. Folding your slice in half (like a hot dog) secures the toppings in place and gives the slice the necessary rigidity to get it to your mouth. If you’re eating inside, feel free to pick up a fork and knife.

Don’t eat the crust. No one will judge if you simply can’t help it (the crust is that good), but no one will chide you for acting childlike if you don’t finish your crusts.

Also, there is no leftover pizza in Naples. If for some bizarre reason you don’t finish your pizza, throw it away. Pizza is eaten fresh; that’s all there is to it.

To be clear, you can’t go wrong with any pizza in Naples. That said, there’s some debate over where to find the best pizza. I’m giving you my (quite educated) opinion, but it’s by no means definitive.

Of all of the pizzerie that I visited, Pellone’s pizza consistently had the most vibrant, satisfying flavors. It also had the best people—I’ve never met an unkind person in Naples, but the staff at Pellone made us feel like family.

Let me explain: I tell people to visit southern Italy because it’s the place that captured my heart. Italy’s history, art, architecture, food—it’s all beyond compare, but the best part of Italy is its people. The Italian people are warm. They’re vibrant, funny, kind, welcoming. And when I hear that someone visited a fancy dome, I’m so happy for them! But I wish that they could step into the real Italy: the Italy with the people, the jokes, the packed highways and bustling markets and throngs of working locals jostling around a local pizzeria at lunch time. Pellone is that pizzeria. It’s a tiny taste of the real Italy, and it welcomes visitors with open arms.