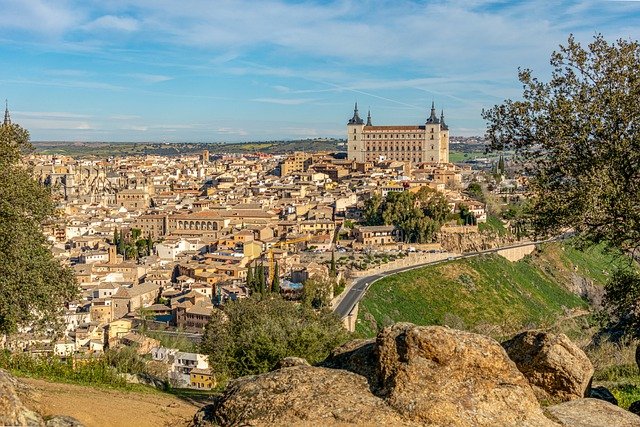 In the center of Spain lies a hilly city, notable for its grand Gothic cathedral and mighty fortress that stands guard next to the Tagus river. The city’s architecture and culture are marked by strong Jewish, Muslim, and Christian influence. Though the city used to be the capital of Spain, you won’t find any skyscrapers here. Instead, you’ll find tiny, twisty streets so narrow that when a car drives by, you’ll have to hug the wall to give the car space to pass. If you walk into a market in the middle of the day, you might come across Catholic nuns doing some shopping. And don’t plan on eating dinner here until very late—most restaurants begin serving dinner around 8:00 or 9:00 p.m.

Across the Atlantic, four thousand miles to the west, lies a city of skyscrapers. The city used to thrive due to the part it played in the glass industry. Although not quite as vibrant today as it was decades ago, the city still boasts one of the best art museums in the area and is known for its Hungarian hot dogs. For a day of fun, you might head to the first-rate science museum. On a summer evening, you’ll hear cheers coming from the baseball stadium. The city’s team is called the Mud Hens, and the fans dance the Chicken Dance during the seventh-inning stretch.

Though these two cities are so different, they bear the same name. Toledo, Spain became sister cities with Toledo, Ohio back in 1931, making their relationship the oldest officially-accepted sister-city relationship in the world.

Over the years, Toledo and Toledo have forged strong ties. Evidence of these ties can be found in unexpected places. For instance, the Toledo, Ohio newspaper is named The Blade—a reference to the Spanish sword making industry in Toledo, Spain. And in the city in Spain you will find a sign for “Calle de Toledo de Ohio,” or Toledo Ohio Street. There are little linguistic connections too: you may occasionally hear Ohioans say, “Holy Toledo!” Some claim that this exclamation refers to Toledo, Spain and the role it has played as a center for Christianity, especially Catholicism.

These subtle but meaningful connections are only one aspect of the sister-city relationship between the two Toledos. According to the website for the Association of Two Toledos, the relationship aims to foster cultural understanding and promote intercultural exchange. Over the years, delegations have been sent from Spain to Ohio and vice-versa to commemorate important events in the cities’ histories. The association also offers educational opportunities for young people.

Although the names Tol-ee-doh and Tol-ay-doh only vary in their pronunciation, not all sister cities bear the same name. And there are several U.S. cities that have ties to many international communities. According to batchgeo.com, Laredo, Texas is the U.S. city with the highest number of sister-city relationships–a total of 41 connections, mostly in Mexico. Chicago ranks second for quantity of sister-city agreements. And the most common country for a U.S. city to have ties with is Japan.

The strength of the bond between sister cities varies, and not all sister-city relationships last. But the two Toledos shine as an example of how international relationships can benefit and strengthen communities around the world.