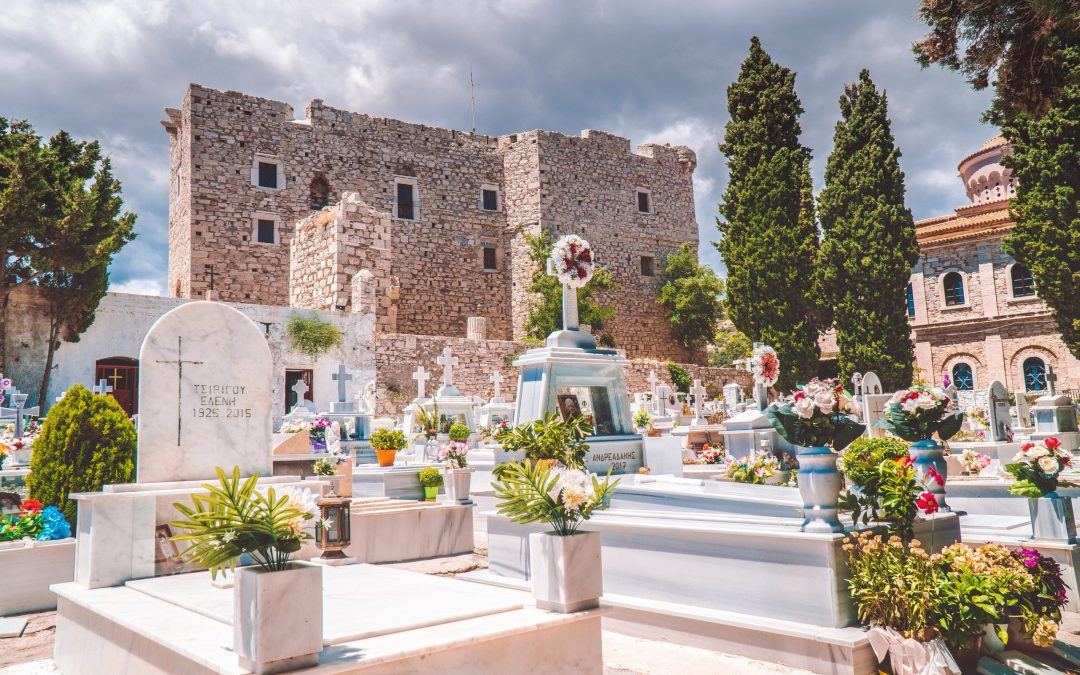 Humanity is obsessed with life. The mantras of YOLO and Carpe Diem are modern reflections of the romanticism of living. While breath in the body makes you technically alive, it can be difficult to determine how to frame and fully live a life. There are thousands of blog posts describing how to achieve a life full of vigor, ranging from the electric beat of active community involvement to the mellow refreshment of the quiet life. Whatever path we choose, there is a similarity we all share in life: the desire to commemorate it after death. Through this logic, it is clear that it is natural for funerary art to exist as a way to express an aura of a life dearly missed.

As I visited handfuls of museums while studying abroad, the beauty of death began to dawn on me. I don’t mean that death isn’t difficult—earlier in the same year my older sister passed away. By seeing and learning about ancient and modern funerary rites, a sense of peace grew within me. I began to understand that death is complicated for everyone. Every culture has to find a way to grapple with the loss of a loved individual. I began to appreciate the certain painful beauty in the responses that generations of people have developed to remember the lives of those who went before. While it can be hard to admit, death is a natural part of life. After the personal loss of my sister, I couldn’t help but be intrigued and humbled by the ways that communities and cultures mourn the deceased and cherish their memories.

Graveyards, cemeteries, and wherever bodies are laid to rest carry a somber atmosphere of quiet reflection. From a young age, I found these areas to be interesting sites to respectfully visit. A Memorial Day tradition in my family was to pile into the car and drive to the local cemetery to visit the family plot. There we would lay flowers before the headstones as my parents, and grandmother would tell short stories to help us get to know who we were visiting. I’ll confess that as a child I was a little unnerved when visiting cemeteries. After all, gravesites were often places depicted in media as spooky and unwelcoming.

As I grew up, my attitude began to change. I visited Arlington National Cemetery in Virginia as a teenager. I was on vacation with my family, and it was a destination my parents were excited for us to see. It did not seem like the typical tourist destination to me. My parents wanted my siblings and me to feel a deeper connection to the history of our country and the sacrifices of the individuals who came before us. It quickly became apparent that visiting cemeteries and graveyards was going to be part of the norm for this vacation. We enjoyed quietly walking through rows of headstones and finding familiar names. I felt inspired in a different way than I had ever been before. It was exciting to find the gravesites of people I’d read about in history books. For me, seeing their headstones made their lives and contributions real and powerful even in my contemporary life.

This approach to visiting gravesites changed my attitude and feelings about death as well as life. Cemeteries are not just sets for horror movies—they are areas of land dedicated to humanity, life, and loss. In my travels I developed greater empathy and awe by being able to visit such places.

When going to visit a gravesite, it is helpful to be able to identify the type of tomb you are seeing. It can be easy to confuse the terms graveyards and cemeteries as synonyms for a burial site, but there is a slight distinction between the two. A graveyard, also referred to as a churchyard, is land attached or near a church that has been designated for burial usage. A cemetery traditionally refers to burial land that is not associated with a church. A necropolis typically refers to a large cemetery that belonged to an ancient city. The Latin term loculus, plural loculi, can be used to describe any architectural feature designed to hold a body. Mausoleums, which are free-standing monumental buildings that serve as burial chambers, can contain a singular loculus or multiple loculi. Catacombs also house loculi, as it is a series of underground passages with niches or small chambers in the wall where bodies may lie in repose.

There are many beautiful examples of all these types of tombs. While I was studying abroad, my family went through the process of designing a headstone for my recently-deceased sister. It was a difficult process that turned out to be rather therapeutic. As I wandered around museums and ruins in Greece that featured ancient funerary, it was easy to contemplate my own traditions and draw strength from the elegant and thoughtful ways humanity has memorialized life. I was stunned by how sculptures were able to create intricate relief designs that paid homage to not only an individual but also their family and heritage. Traveling and being exposed to gravesites and burial traditions has become one of my favorite things to do. There are many incredible cemeteries that the public can visit around the world. These sites prove that graveyards and cemeteries are places that commemorate life.

Initially the privately owned Evergreen Cemetery, Bonaventure Cemetery is a sprawling area with gently curving walkways, beautiful trees and flowers, and funerary art. It wasn’t uncommon in the 1800s for families to enjoy picnics on the grounds. To this day, Bonaventure has retained a peaceful atmosphere that thousands of visitors enjoy.

There are many hallowed sites around the world where countless individuals have fallen in battle. Among these is Gettysburg. It is one thing to read about the loss and sacrifice that occurred here in a book, but taking the opportunity to be on the site in person gives an individual an opportunity to become more self-aware of their own living history.

This cemetery is like a garden filled with beautiful works of sculpture. It is approximately 109 acres large and has paved walkways lined with trees. A walk among the tombs is considered by some to be a romantic option, as the well-groomed foliage and exemplary funerary art create a memorable afternoon stroll. If you don’t fancy wandering on your own, there are guided tours available.

This cemetery has brightly painted crosses and grave markers. However, the bright paint is just part of what makes this cemetery a unique site. Each grave marker depicts, in vibrancy of both color and language, the story of how the individual died.

Petra is an impressive ancient necropolis. It is a national park in Jordan that has active archeological research. Petra is much larger than the singular building known as the Treasury that has been featured in film. The park includes dozens of amazing facades cut from red rock. It is spectacular to visit both during the day and the night.

Valley of the Kings

Built by the pharaohs of the New Kingdom, this massive necropolis was designed for the elites of Egyptian society. Close to the ancient city of Thebes and the modern city of Luxor, the Valley of Kings offers visitors a glimpse into elaborate and highly decorated tombs. These burial chambers are truly able to express a sense of respect and grandeur for the lives of those who lie peacefully inside.

There is ample evidence that gravesites are important places for humanity. In these ethereal spots on Earth we are able to stand in awe of life and the miracle of having lived.