What a Wonder-Full World 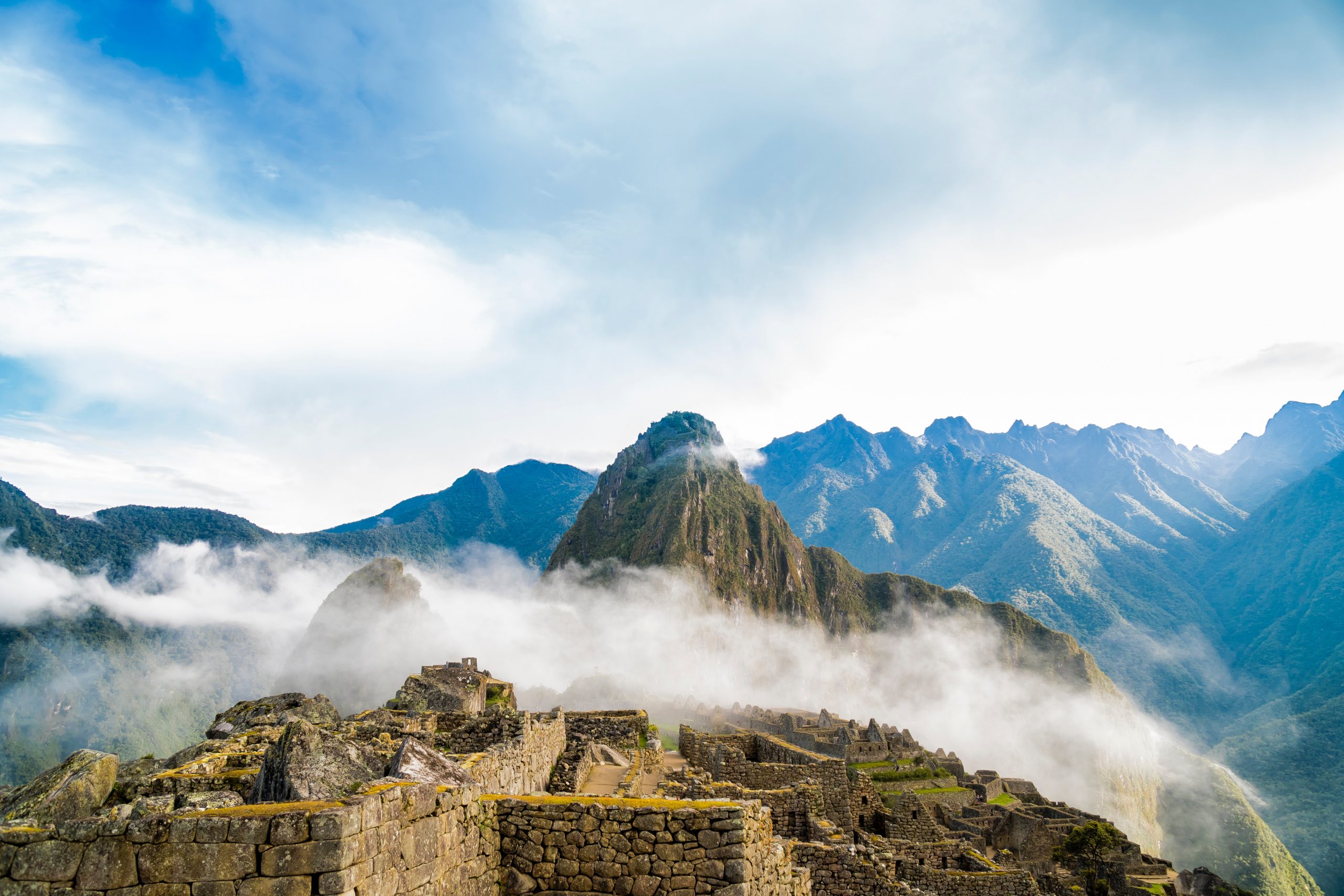 A three-story temple painstakingly hand-carved in the side of a red rock cliff. Nature’s fireworks, flashing silently and elegantly across the northern night sky. An underground tunnel connecting two landmasses by railroad.

History of the Ancient Wonders

Humans throughout history have felt this same amazement about the world we live in. The ancient Greeks, in their many conquests around the world, were often in awe at the wonders they found. They spoke with one another about theamata, “sights” or great “things to be seen” that they had encountered on their travels. Many philosophers and historians in the ancient world would record lists of such “sights” and these lists formed the first travel books of the world.

The first list of wonders consisted only of great sculptures or impressive architecture that the Greeks saw in their travels, and the list only included places in the Mediterranean and the Middle East. The original list consisted of seven wonders because seven was often seen in Greek mythology as a number representing perfection or completeness. Seven is also the average number of items that the brain can store in short-term memory.

The original list of “Seven Wonders of the Ancient World” included the Great Pyramid of Giza, the Hanging Gardens of Babylon, the Temple of Artemis at Ephesus, the Statue of Zeus at Olympia, the Mausoleum at Halicarnassus, the Colossus of Rhodes, and the Lighthouse of Alexandria.

The Great Pyramid of Giza is truly an architectural wonder. At the time, it was the tallest man-made structure in the world, which was an impressive feat. Almost more amazing is the fact that it still stands today.

In the ancient city of Babylon, some buildings were covered in hanging plants and tiered gardens that seemed to defy the laws of gravity, now titled the Hanging Gardens of Babylon. Complicated engineering enabled these lush and wonder-inducing gardens. But besides the words of those ancient Greek travelers, there is no evidence that these mystical gardens ever actually existed.

Temple of Artemis at Ephesus

Ephesus, in modern-day Turkey, about 800 BC

Also known as the Temple of Diana, the Temple of Artemis at Ephesus was rebuilt twice, once after a flood and again after it was burnt down. In addition to the ornate architecture and impressive stonework put into the creation of this temple, it’s an impressive building because of the great treasures it contained. Excavations of the area in the 1800s recovered over one thousand precious items including coins, jewelry, and other goods brought by those wanting to honor the great goddess.

Statue of Zeus at Olympia

The Statue of Zeus at Olympia, meant to honor the greatest of the Olympians, was over 40 feet tall (over 12.4 meters) and made from pure ivory, glass, and gold. The statue depicted the great god sitting on a large throne and was created by Phidias, the same sculptor who had earlier created the Athena Parthenos.

Halicarnassus, in modern-day Turkey, about 350 BC

Did you know that the term mausoleum comes from the name Mausolus? Mausolus, a ruler of ancient Caria, had planned this elaborate tomb, the Mausoleum at Halicarnassus, to be built for himself as a part of his plan to rebuild the capital city. But it wasn’t finished until after his death. The Mausoleum at Halicarnassus was one of the first above-ground tombs of the ancient world. It was covered in intricately carved reliefs and stood over 148 feet (45 meters) high.

Rhodes, Greece about 280 BC

The Colossus of Rhodes statue payed tribute to the sun god Helios and was constructed to celebrate a war victory. It was over 108 feet (33 meters) tall, approximately the same size as the Statue of Liberty. It fell as a result of an earthquake. But many tourists still traveled to see the great statue even after it had fallen to pieces.

Pharos, Alexandria, Egypt, about 250 BC

Like the pyramids, the great Lighthouse of Alexandria stood as the tallest man-made structures in the world of its time. Parts of the lighthouse survived into the 1400s. It was constructed on a small island shortly after the reign of Alexander the Great and guided many ships safely home.

Of these original wonders, only the Pyramid of Giza still stands today. But thankfully the list of worldwide wonders now extends beyond these original seven wonders.

What are the wonders of the world?

Throughout history, the original list of wonders has expanded. There are more than ten different lists of wonders created over the ages, including architectural and engineering wonders, ancient wonders, natural wonders, underwater wonders, and technological wonders. The definition of wonder has expanded from just “things to be seen” to also wonderful things that connect humankind, either by improving communication and travel (such as the internet, which creates digital connections or bridges, which create physical ones) or invoking thoughts and new ideas in us the way those original sights did—in the sense of awe they create in us.

In the year 2000, a man named Bernard Weber started New7Wonders as a project to engage and unite people around the world in a new way, through a new platform: the internet and the use of mobile phones. He reached out to Unesco and the UN to compile a list of world heritage sites and other places of significance that could be voted on.

What began as one man’s wish to unite the people of the world in a small way grew over the course of seven years into an international campaign, encouraging the people of the world to vote on what they thought should be the New 7 Wonders of the World. On voting day, the seventh day of the seventh month of the seventh year in the new millennium (July 7, 2007), over 100 million people cast their votes. The winning wonders included seven new ancient wonders: the Great Wall of China, the Taj Mahal, Petra, the Colosseum, Christ the Redeemer, Chichén Itzá, and Machu Picchu. 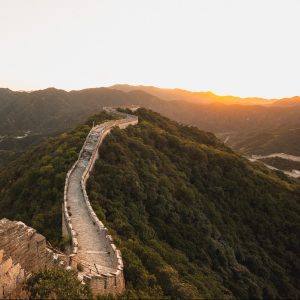 The Great Wall of China

Northern China, as early as 700 BC

The Great Wall is not in fact one great wall, but a series of smaller “walls” built along the northern border of China. They were built under different dynasties over a course of a one-thousand-year span. These walls were quite functional and provided a defense system, border control, trade regulation, and more. The laborers on this project put blood, sweat, and tears into the construction of the wall—literally, those who died were buried in the wall and construction then continued without them. 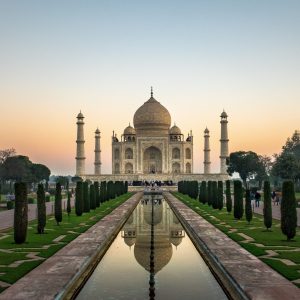 The Taj Mahal is a marble mausoleum built by a Mughal emperor to honor his favorite wife. Aside from the beautiful mausoleum, the it also features elaborate gardens, a long reflection pool, a mosque and guesthouse, and a fortress-like wall. The traditional Mughal architecture is absolutely stunning, featuring large domes and intricately decorated walls and spires. It’s no doubt that the emperor truly honored and loved the one whom this all was built for. 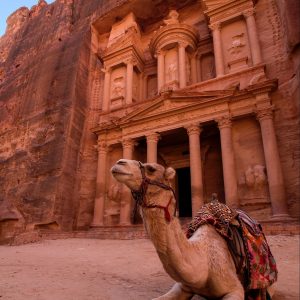 Petra is a famous archaeological site in Jordan’s southwestern desert. Carved in the sides of great red cliffs, these dwellings were home to Nabataeans, tradesmen of the desert. Not much is known about its inhabitants, but part of the reason this sight is such a wonder is that these people were previously nomadic wanderers. What led them to this place and convinced them to settle here? And where did they learn to carve such beautiful things? 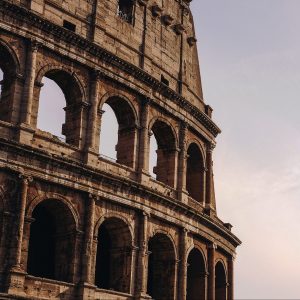 One of the defining symbols of ancient Rome is this giant oval-shaped amphitheater. The Colosseum was built in the center of the city and provided all different kinds of entertainment for the people there. From gladiator fights to ancient dramas, it gives us a peek into the hub of entertainment and city life for the Romans. Even today, it remains one of the most popular tourist spots in Italy and is one of the most photographed landmarks in the world. 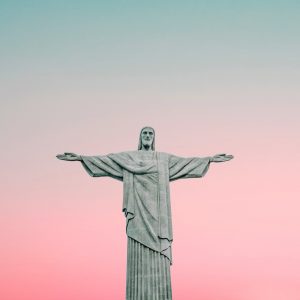 The construction of Christ the Redeemer was a group effort. A French sculptor, Romanian sculptor, Brazilian engineer, and French engineer all worked together on this statue which now stands 98 feet (28 meters) in Rio de Janeiro, Brazil. The largely Catholic population of Rio wanted a Christian landmark in their city, and this depiction of Christ was constructed there overlooking the city as a result. 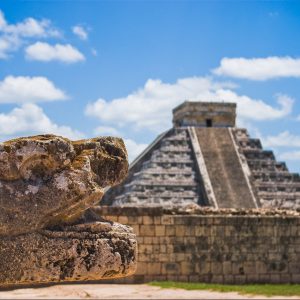 Chichén Itzá was one of the largest cities built by the Mayan people, and mythically it was known as one of the greatest of the Mayan cities. Its name means “at the mouth of the well of Itza” or “at the edge of the enchanted waters.” Many underground rivers flow in and around the area, and sinkholes around the city could also have been sources of sacred or “enchanted” water. Today, its pyramid-like temples are one of the most visited archeological sites in the world. 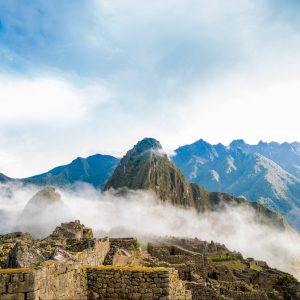 Machu Picchu is a fortified city in the middle of a giant mountain range. Constructed in the 1400s, this incredible city in the mountains wasn’t known to most of the world until the 1900s. Part of what makes this city so impressive is the man-made terraces used for farming. These terraces weren’t easy to build, but they improved drainage in the city and increased safety by preventing landslides that were common in the area.

Four years after these new wonders were selected, the New7Wonders campaign continued, allowing people to vote on seven new natural wonders, and in 2014, to vote on new wonder cities. July seventh, the anniversary of the voting day, is still celebrated by many around the world as Seven Wonders Day, a day to honor the wonder-filled world we live in.

The wonders mentioned here are just as few of the many that have been nominated and selected through the course of history. Other natural phenomena like Victoria Falls, the Grand Canyon, and even the aurora borealis have been counted among the wonders of the world. The definition of wonder has changed over the years, and it continues to change with the progression of the world and the brilliance of the people in it.

What makes a wonder?

So what makes something a true “wonder of the world?” Maybe it’s in the way it was created or how long it has lasted. Or maybe it’s because of the questions that these sights beg us to answer: Who has been here? Who found or built or made this, and how did they do it? What’s their story?

Whatever we may or may not ever know about these sights, one thing is clear: these wonders unite us. They make us feel something; they connect us with one another. As people, we are collectively in awe at the genius of our ancestors before us and at the incredible world that we live in.

And that’s something to wonder about.