Goodnight, World Fables Around the Globe 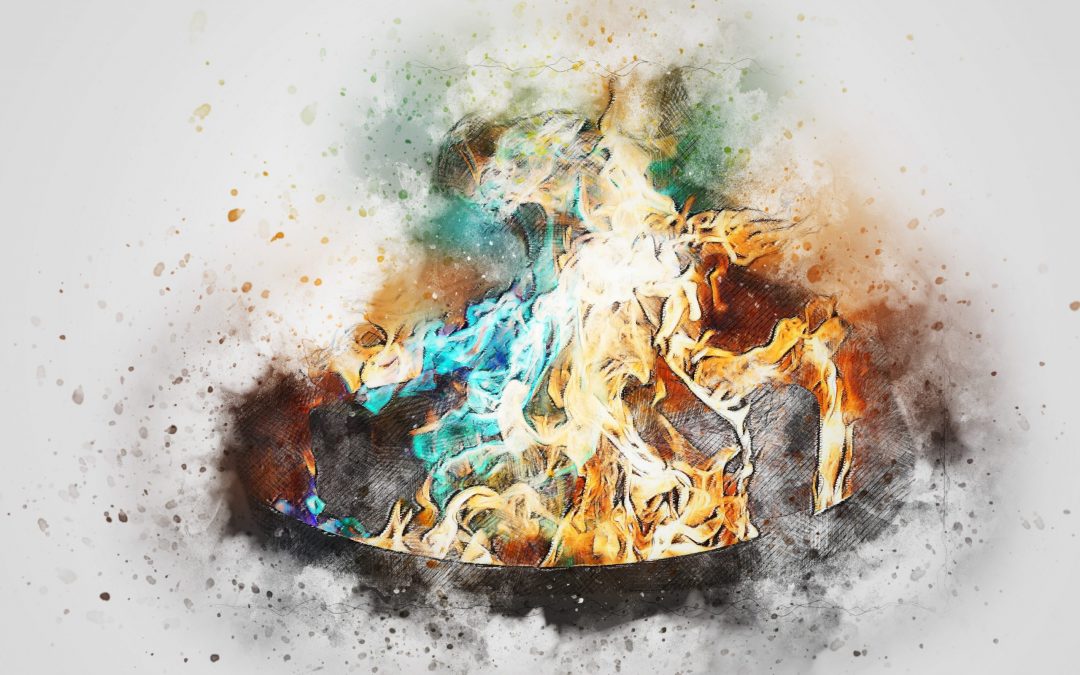 Where did China get its first cup of tea? Who invented boomerangs in Australia? How did African leopards get their spots? Though there are plenty of factual answers to these questions, we can often learn more about a country from its bedtime stories than its history books. After all, humans have used stories to explain their surroundings for thousands of years, passing legends down from generation to generation. Through these legends, we learn about the gods our ancestors worshipped, the traditions they held dear, and their relationships with the world and the people around them.

There’s no need to pack our bags or board hot-air balloons—let’s take a trip around the world in eight tall tales.

Our journey begins as many myths do—in Greece. Ancient Grecians are well-known for their worship of the almighty Zeus and his sibling gods and goddesses, so it’s no surprise that they often attributed their blessings to the gods. One of those blessings was the gift of fire.

As the story goes, Zeus held a large feast one day on Mount Olympus and invited all the gods and goddesses to join him, including the titan Prometheus. As the creator of man—and a clever trickster—Prometheus was somewhat of a pest. At the feast, he disguised a pile of bones and fat as the thickest, juiciest portion of meat. When Zeus selected that portion for himself and discovered Prometheus’s trickery, Zeus swore in his anger that mortal men would never have the gift of fire and must always consume their meat raw.

But Prometheus was undaunted. He flew to the forge of Hephaestus and stole a flame, which he brought as a gift to man. Ever since, man has had fire.

In other parts of the world, the story of man receiving fire is quite different. While Greek myths focus on the affairs of the gods, stories in South America emphasize man’s interactions with beasts.

In the lush jungle next to the Amazon river, a young boy got lost while searching for eggs. Scared and alone, the boy hid and survived for several days without food. The first creature to find him was Jaguar, who brought the boy home to his lair. The boy was amazed to see that Jaguar and his wife cooked their meat over a fire. When the boy tasted the meat, his astonishment grew. The fire was hot and comforting, and the meat was delicious!

When the boy finally made it back home, he brought a piece of cooked meat with him. His people were curious about the meat and the fire and wanted it for themselves. They snuck to Jaguar’s lair, stole some burning coals, and built a fire in their village.

When Jaguar learned of his stolen fire, he angrily vowed never to eat cooked meat again. To this day, Jaguar eats raw meat and has eyes that glow yellow, like flickering flames.

Speaking of big cats and fire, let’s head to Sierra Leone to learn how leopards got their spots.

In the early days, Leopard was the pale, unblemished color of sand. He and Fire were great friends, but Leopard wondered why he always had to visit Fire’s house instead of Fire visiting his. When he asked Fire about it, Fire simply said that he never left his house.

Leopard begged and begged until Fire finally agreed to come over for a visit. He said, “I will come, but only if you make a path of dry leaves from my house to yours.” Leopard was thrilled! He and his wife both gathered a heap of dry leaves and sprinkled them in a path from Fire’s front door to theirs.

When Fire appeared at Leopard’s door, he was crackling with so much heat that he set Leopard’s house on fire. To escape, Leopard and his wife had to leap out the window. As Leopard fled, Fire’s flames licked Leopard’s sandy fur, causing scorch marks to appear. Because Leopard was burned by Fire, all leopards now have dark spots on their fur.

Though Russia has no tales about leopard spots, it does have a myth about how bears got their tails. 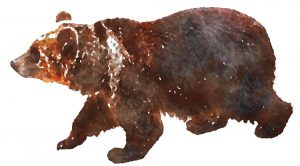 In the beginning, King Lion was the only creature with a tail. All the other animals were jealous and requested that King Lion provide them with tails, too. At King Lion’s request, his wizards gave him a great big box full of tails—some thick and fluffy, some long and thin. One by one, the animals came to claim their tails.

Unfortunately, the bear was sleeping when King Lion announced that he was giving away tails. By the time the bear arrived, the great box was empty and all the tails had already been taken. With his sharp claws, the bear combed a lock of fur from the badger and used that as a tail. Ever since, the bear’s tail resembles a small piece of fluff.

In India, we learn about a creature with quite a different tail—or rather, a plume.

Pride of the Peacock

You see, all peacocks used to be plain, ugly things with brown feathers and webby, gnarly feet. But one day, the sky god Indra was running away from the demon king Ravana when he rushed past a peacock. The peacock kindly spread his tail and allowed Indra to hide behind him while Ravana thundered by.

To thank the peacock for saving his life, Indra transformed the bird’s feathers into a gorgeous blend of cerulean, lush green, and indigo. The peacock has been known as the most beautiful bird, and the most prideful, ever since.

Bedtime stories can explain much more than nature and animals; they can also shed light on how certain cultures got the tools that make them unique. Let’s head to Australia to learn about the boomerang.

The Aborigines in northern Australia are called the Binbinga. In Binbinga legend, earth’s creatures were created by Ancestor spirits during an era called Dreamtime. One of the Ancestor spirits, a snake spirit, was called Bobbi-bobbi.

Bobbi-bobbi looked kindly on mankind and sent “flying foxes” (fruit bats) for them to eat. However, men couldn’t catch the flying foxes, who flew too high in the sky. When Bobbi-bobbi saw this, he had compassion. He pulled out one of his own ribs and offered it to men. “Use this to catch the flying creatures,” he said. “When you throw it in the air, it will come back to you.”

Bobbi-bobbi’s rib became the first boomerang. Not only is it a hunting tool and a weapon, but it is also an Australian icon.

It’s hard to imagine Australia without boomerangs, but it’s almost impossible to imagine China without tea. Where did China learn the useful properties of herbs and boiling water? We have to travel back to ancient China to find out.

The Legend of Shen Yung

In ancient times, China was ruled by emperors, and one of the greatest emperors was Shen Yung. Shen Yung was unique among men for both his wisdom and his physique: he had the head of an ox, the body of a man, and a see-through stomach. His see-through stomach allowed him to watch what was happening inside his body when he ate something new.

Shen Yung tried all sorts of strange plants and herbs and learned which ones had a good effect on the stomach and which did not. He was the first to gather leaves and stew them in hot water. After drinking this mixture, he found that his stomach was cleaner and more comfortable. He had discovered tea.

Unfortunately, Shen Yung’s stomach proved to be his undoing. He got careless with what he consumed and ended up being poisoned by a strange, sharp grass. Despite his folly, Shen Yung is remembered for his discoveries and the things he gave his people: tea, ginseng, medicine, and farm plows.

As Shen Yun’s story shows, we can learn important life lessons from legends and tales. But from the Middle East, we learn that stories can also make us laugh. One tale that teaches the value of humor is the story of a clever smuggler, an overeager inspector, and an unexpected crime.

A smuggler approached the border between two lands. He was a clever man and had with him one donkey carrying many bundles of straw.

At the border, the inspector told the smuggler, “I think you’re hiding something in that straw. You must allow me to search it before you pass through.”

The smuggler said, “Search as much as you wish. If you find anything other than straw, I will gladly pay your fee.”

The inspector searched to his heart’s content. He pulled apart the bundles of straw until there was straw everywhere—on the ground, in the air, on his clothes—but he couldn’t find anything valuable. Reluctantly, the inspector let the man through the border.

The next day, the same smuggler met the same inspector at the border. Again he brought a donkey loaded with straw. Again the inspector insisted on searching the straw, but he still couldn’t find anything of value.

Exasperated, the inspector cried, “What a clever smuggler you are! I know you’re hiding something. But still I have not found it, so I must let you through.”

The inspector later retired but never found peace. He always wondered what the smuggler had been sneaking across the border. Finally, when he was a very old man, he saw the smuggler in a crowded market. “You!” he cried. “Come speak with me!”

The smuggler walked toward the old inspector.

“I know you were smuggling something,” said the inspector. “What was it?”

The smuggler grinned and said, “Donkeys.”

From ancient Greece to the Middle East, from peacocks to flying foxes, we’ve traveled around the world in eight tall tales. We’ve learned that stories can reveal our beliefs, instill cultural values, and shape the way we see the world. But with so many distractions in modern times, it can be easy to forget the importance of stories—to forget our roots and the ways of our ancestors.

That’s why we’ll end our adventure with one final tale—the Japanese wisdom tale of the wild strawberry.

A man was being chased by a tiger when he came to the edge of a cliff. Knowing that if he stopped running he would become the tiger’s meal, the man grabbed a vine and jumped off the cliff.

The vine caught the man and held his weight. Looking up, he could see the tiger on the edge of the cliff, swatting the air angrily. Looking down, he could see another tiger pacing the ground below, ready for the man to drop.

As he dangled from the vine with one arm, the man heard a tiny sound above him and saw two mice, one white and one gray, nibbling at his vine. The vine grew weaker and weaker where the mice were chewing. Next to the mice, in a crevice in the cliff face, was a single wild strawberry, growing against all odds.

With his free hand, the man plucked the strawberry from the vine and ate it. He had never known a strawberry could taste so sweet.

Like the strawberry in this tale, stories can refresh and comfort us—especially when our circumstances are bleak. Let’s choose to savor them.