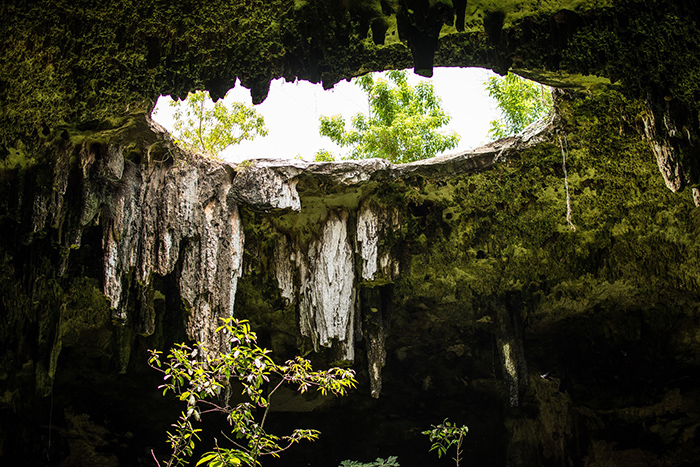 First, my heart falls into my stomach and disrupts the butterflies already there; second, I’m in the air, accelerating forward in the dark; third, I pull the ripcord and feel the weightlessness of freefall; fourth, I hit the cold water and sink deep before my life jacket pulls me, gasping, to the surface.

The cenotes of the Yucatán Peninsula, Mexico, have been around for thousands of years, and are very popular tourist attractions. They are, essentially, underwater freshwater caves. Friendly guides can talk for hours about how water carves rock to form the caves, and the best times to come to avoid crowds

But, when I was actually in the water and looking down, when I saw that the depths extended further than the light could reach, I didn’t think of anything the tour guide said. I could only think of the ancient people who worshipped these water holes. I thought of their sacrifices to ancient gods and imagined that I could almost see a pale bone from a human sacrifice somewhere in the distance or the glint of ancient gold.

I swim farther, then flip upside down and shiver. The surface now appears below me, and the water extends into infinity above. Slow-moving water has carved away at the limestone bedrock here for millennia, making it almost look like an abandoned Atlantis. Tiny fish flicker in and out of my vision, giving the illusion of something large and alive among the underwater columns and boulders.

For just a second, I can catch the majesty that led the ancients to center their worship around the gods that lived in these caves—aside from providing pure, clean water, the miles of underwater tunnels below me hold nothing but mysteries, beckoning me to swim down and explore them.

I pull my head up and swim to keep up with my family. Before too long—all too soon—I am at the end of the tunnel, a shaft of brilliant light from the surface marking our exit.

I crawl up on the stone, shiver on the shore, and look back at the alien, upside-down world that I have briefly visited.

The gods may live there, indeed.