A Pilgrimage to Pawnee and Scranton

This summer, my husband and I lived in Wasco, CA, on a nut farm (of the almond and pistachio variety, not a psych ward), while he worked an accounting internship.

The nut farm’s entertainment scene was lackluster, to say the least, so we drove two hours south to Long Beach to celebrate our anniversary. The food was fabulous and the weather was sublime—and it was there, at The Attic restaurant, as we were both on our phones waiting for brunch (as married couples do), that we came across this article: “The Complete Parks and Recreation Guide to Los Angeles.” The rabbit hole led us to “The Office Filming Locations.”

And we realized how close we were to the holy lands of Pawnee, Indiana, and Scranton, Pennsylvania.

Parks and Recreation is my favorite TV show because I’m a sucker for quirky sitcoms with strong female leads, and my husband watches and quotes The Office religiously. Traveling to see these places felt like a rite of passage, and the extra hour and a half it would take us to return back to the nut farm was a small price to pay to see Leslie Knope and Michael Scott’s worlds.

“I think that all government is a waste of taxpayer money. My dream is to have the park system privatized and run entirely for profit by corporations, like Chuck E. Cheese. They have an impeccable business model. I would rather work for Chuck E. Cheese.” —Ron Swanson 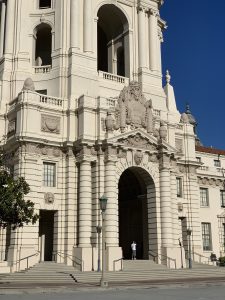 We started our journey from Long Beach to Pasadena City Hall, where they filmed the exterior shots for Pawnee City Hall. There seemed to be a mass exodus leaving the city—I later learned, coincidentally from Angela Kinsey of The Office’s Instagram account, the Pasadena Cat Convention had just concluded—and our path to City Hall was clear.

I was irrationally nervous as we got closer. In my heart of hearts, I wished that I could see Leslie and Ron and the gang.

We parked illegally in front of the near-empty City Hall, took some quick selfies, and hopped back into the car for our next destination: Ann Perkins’s house.

I drove half an hour or so from Pasadena straight west to Van Nuys, where Ann lived. We didn’t want to be creepy or disrespectful to the actual residents of Ann’s home, so I idled on the curb opposite the home while my husband snapped subpar pictures through the dirty car window. But. It. Was. Ann’s. House! Where it all began! The pre-origins of Galentine’s Day!

We drove around the corner and were disappointed to see that the pit, which had been real, was now an apartment complex instead of a park. And on that note, we headed a few blocks east to Scranton.

Interestingly enough, Jim and Pam Halpert’s house is very close to Ann’s (the actress who plays Ann Perkins also played an old flame of Jim’s, Karen Filipelli). Again, to avoid being stalkers, we had a quick drive-by past the ivy-covered home, while my husband spouted out every funny quote that was relevant to the Beesly-Halperts.

“I am Beyoncé always.” —Michael Scott

We left Jim and Pam’s and drove straight north to an industrial part of northern Los Angeles.

“We’re going to Saticoy Street! Charles Miner worked for Saticoy Steel.” My husband shared that tidbit with me more than once.

We turned left at a stoplight surrounded by seedy gas stations and headed down a long lane lined with factories—very Scranton-esque—and I wondered if we had gone to the wrong location.

But then came a line of tall hedges, and there it was: Dunder Mifflin–Scranton. 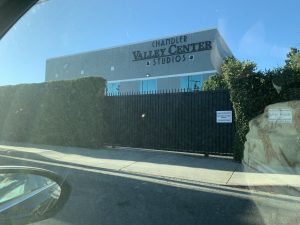 My husband pointed to the roof. “That’s where Michael was when he was about to jump onto the bouncy house!”

For him, it was better than being a kid at Christmas.

The only people there were us, a sleeping homeless man, and a construction worker across the street. After debating whether or not it was safe to exit the car, my husband decided that the reward was worth the risk, and ventured outside to take some pictures—still talking about what scenes were filmed where.

By then, the sun was setting and it was time to leave—but we never really left Scranton, because my husband immediately started an episode of The Office as we drove away.