The Meat on the Street 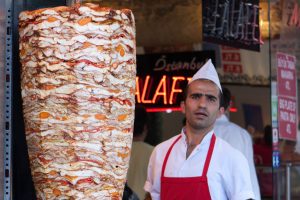 When you think of Italian food, what do you imagine? What about French food? German? Unless you’ve spent much time in Europe recently, you probably didn’t picture the döner kebab. 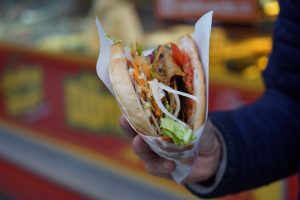 The döner kebab is originally from the Ottoman Empire, today known as Turkey. Traditionally, it is made from seasoned meat that is stacked in a cone and cooked on a rotisserie (different from the American kebab, which is chunks of meat or vegetables on a small skewer). The outer layer of meat gets shaved off and served in pita bread. Nowadays, it is often served with cabbage, tomatoes, yogurt sauce, and other toppings.

No one knows exactly when the kebab came to Europe, but its popularity took off in the 1980s when laid-off Turkish workers in Western Europe began starting more and more Turkish restaurants to make a living. Eventually, the kebab (also known as shawarma or souvlaki) became a staple of Turkish, Greek, and Middle Eastern restaurants.

Today, the kebab has taken over London, Vienna, and many other major cities in Europe. According to the ATDiD (Association of Turkish Döner Producers in Europe), there are close to 40,000 kebab shops in Germany and 4,000 in Berlin alone—more than there are in Istanbul! The fact is, kebabs are so cheap, fast, and delicious that one can never get enough. 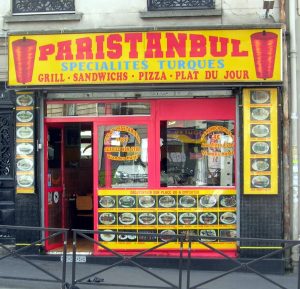 A key feature of kebabs is that they are adaptable. Different countries and regions of Europe have their own versions of kebabs. In Germany, you might get big slices of beef in sesame flatbread, while in the Netherlands your kebab might be full of chicken, fries, and gouda cheese.

What does this mean for the future of European food? Will the kebab unite European citizens or divide them? Perhaps the kebab will become for Europe what pizza and hamburgers became for the United States: a tradition and a symbol of identity.

One thing we do know is that there’s no turning back: the kebab is an integral part of European gastronomy and society. So next time you’re in Rome, don’t be surprised when you see an Italian restaurant advertising “Pizza – Pasta – Kebab”—it’s a European thing.