Suspended in the Sky 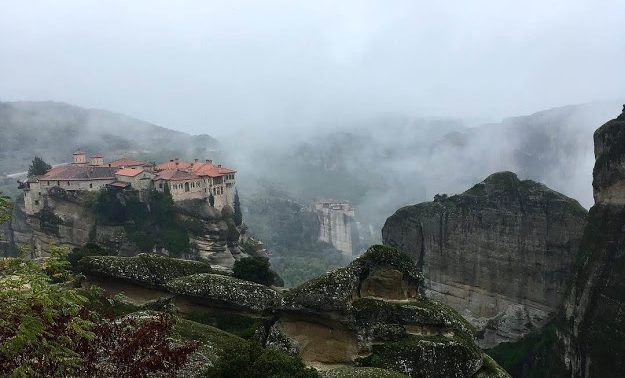 Most people travel to Greece to see the Parthenon in Athens or to take pictures in Santorini, one of the most Instagram-worthy places in the world. While these places are all well and good, the spot you really need to visit is in the mountains overlooking Kalambaka: the Greek Orthodox monasteries of Meteora. 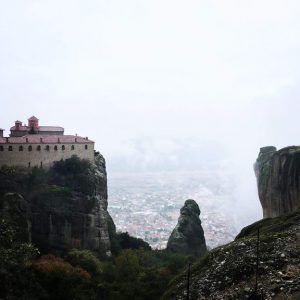 The Meteora monasteries sit atop mountain peaks, but the mountains themselves are more like rock pillars rising over 400 meters (1,312 feet) above the plains. This environment is encapsulated by the name “Meteora,” which means “suspended in the sky.”

Around the ninth century, ascetic hermit monks began to move to these mountain peaks, living in caves and building chapels. Between the fourteenth and sixteenth centuries, twenty-four monasteries were built, six of which remain today and still house Greek Orthodox monks and nuns. Looking from one peak to another, it appears as though the monasteries are part of the mountains. There is no real foundation for the buildings: they are simply built into the rock without any carving of the mountain.

Steps were carved into the rock in the 1920s, but before that, the only ways of getting people and goods up to the monasteries were by rope ladder or by baskets and rope pulleys. If that sounds terrifying, it’s nothing compared to the fact that the ropes were only replaced “when the Lord let them break.” Thankfully, you can now take the stairs.

Along with the gorgeous views and unbelievable architecture, you get to see Greek Orthodoxy up close, which is a fairly rare opportunity, especially for those who live outside of Europe. The monasteries’ walls are covered in Greek Orthodox art, including Byzantine murals and dozens upon dozens of icons. One of the monasteries houses a single monk who has lived there by himself for a few years now. The nuns who live at St. Stephen’s monastery and the monks who live at the others simply go about their business while tourists shuffle in and out. Although none of the monks or nuns interact much with visitors, it’s a privilege to witness them working and worshipping, and you will come to appreciate the Greek Orthodox religion even more. 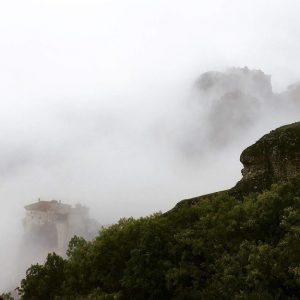 Meteora has also been the inspiration for several things in pop culture throughout the years. The Eyrie of Vale of the House of Arryn from Game of Thrones was based on Meteora; Linkin Park’s 2003 album was named after Meteora; and scenes from the James Bond movie For Your Eyes Only were filmed at the monasteries, specifically the monastery of Holy Trinity. And while it has never been confirmed that Meteora was the inspiration, the monasteries on the mountains look incredibly similar to the air nomad temples in Avatar: The Last Airbender.

There are dozens of places in the world that deserve to be on your travel bucket list, and Meteora is one of them. You will never forget how the sun shines down to the valleys below in the summer or how the mist settles on the mountain peaks in the autumn, making everything a little more mysterious and magical. Who knows? You may be so enchanted by it that you end up becoming a monk.