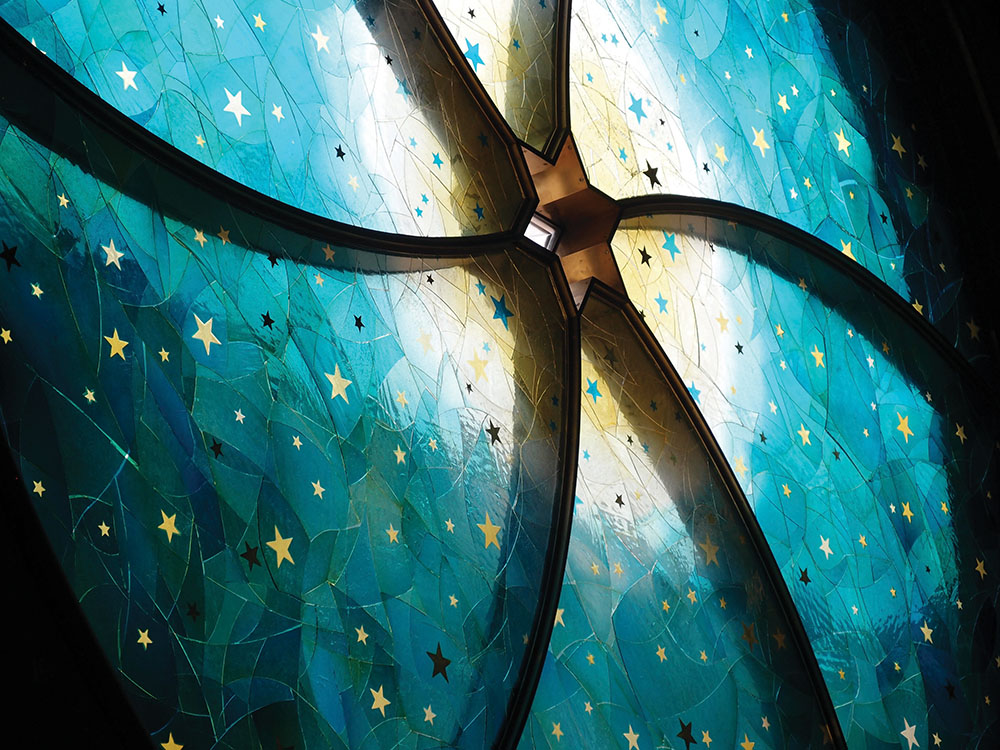 Maybe you’re not really interested in reading—maybe you’re only flipping through this magazine for the pictures. You have your visual fascination in common with a medieval peasant.

Stained glass has graced Christian architecture with its illumination for centuries. Churches were the hub of community activity in medieval Europe, and the wealth and power of the Catholic Church called for nothing but the best in architecture, materials, and art. The stained glass of Egyptian invention and Roman adoption proved to be a valuable medium for expressing devotion and affluence.

However, stained glass meant something different for the average churchgoer. An illiterate commoner untrained in Latin would glean little from church service. Stained glass became the teacher, displaying popular Bible stories and the thematic overtures of Christianity. This art form is termed “the poor man’s Bible,” though it is sometimes the costliest feature of a building.

The Parisian Sainte-Chapelle is a high point for the Gothic period’s love affair with stained glass. Fifteen windows display over a thousand Bible stories in a kaleidoscope of colors—perhaps leaning more into opulence than education. While Sainte-Chapelle should be a pit stop for any patron of France, all tourists can hunt Europe for stained glass in the cathedrals and chapels they visit. 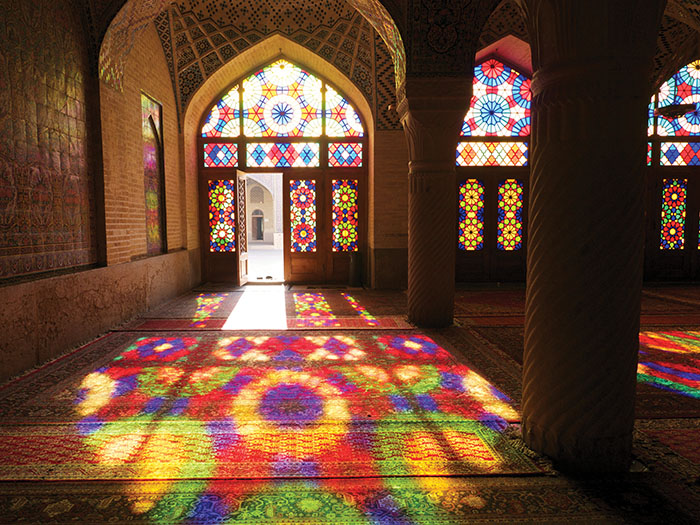 Yet, Christianity hasn’t cornered the market on stained glass. The three biggest Abrahamic religions all intertwine light and divinity in their theology. In particular, Nasir-ol-molk mosque perfectly demonstrates the pinnacle of stained-glass incorporation in Islam.

Nasir-ol-molk is also called the Pink Mosque, built in the nineteenth century and situated in Shiraz, Iran. The elaborate mosaics and pink coloration may dazzle sightseers, but its crowning jewel is the stained glass. Dawn’s light shines through to create an atmosphere of tranquility during morning prayer. It reminds viewers of the Muslim belief that light is one of God’s first creations.

The Pink Mosque’s stunning stained glass is a rarity in mosque architecture, but its effect highlights the importance of light in Islam. In turn, the stained glass can draw attention to other ways mosques use light in their architecture, such as ornamental lamps and latticed screens called jali.

Judaism emphasizes the connection between light and sanctity as well; the Talmud advises the faithful to pray in windowed rooms. Stained glass has been used in Jewish synagogues for centuries as a means of illustrating teachings and religious stories. The Zohar suggests that synagogues ideally have twelve windows, symbolizing the twelve tribes of Israel.

Though some congregants debate whether stained glass in synagogue architecture is appropriate, the art form gained ground as a feature of American temples in the nineteenth century.

One exemplar of Jewish stained glass is the Eldridge Street Synagogue in New York City. The building was previously a synagogue that had fallen into disrepair. Thanks to a restoration project, breathtaking stained glass decorates the building—much of it restored to its original state. One window features the six-pointed star of David in a sea of mesmerizing blue. Eldridge’s stained glass shows Jewish designers that the art form is a possible way of the future for synagogues.

With this new knowledge in mind, globetrotters should be on the lookout for stained glass in religious sites. Peer up into the stained glass of buildings along your travels and take the time to muse.