Mr. Potato Head made it onto Time’s list of “All-Time Top 100 Toys.” That’s no surprise though, because who doesn’t love a potato? The United Nations declared 2008 to be the International Year of the Potato, and in 2010, the world dedicated 46 million acres to potato cultivation. Burn centers in India are experimenting with potato skins and honey, and the combination has long been used as a folk remedy for burns. Potatoes have even been used to send messages! Companies like Potato Parcel and Mail A Spud will write messages on potatoes and mail them to people, a service that I used within the last year.

Potatoes have lots of fun uses, but the very best is food. “Boil ‘em, mash ‘em, stick ‘em in a stew,” said Sam Gamgee—with French fries, potatoes au gratin, mashed potatoes, or potato soup. Here are four very different recipes from around the world, for you to try the next time you have a craving for that terrific tuber.

Stoemp is the richer, Brussels version of a simple, rural dish called stamppot. It’s mashed potatoes and mashed carrots mixed together, plus some bacon bits thrown in for good measure. It may sound odd, but I can personally attest that it is pretty good. A wintertime staple similar to the English dish “bubble and squeak,” it is usually served with fried bratwurst, grilled bacon, or fried eggs. In some families, it’s even served alongside entrecôte, or horse tenderloin. The next time someone says, “I’m so hungry I could eat a horse,” you can break out this recipe as the next-best thing! (Note: Stowawaydoes not endorse the consumption of horses.)

Heat a small skillet over high heat. Add the bacon and sauté for 5 minutes until the bacon bits are well colored. Remove from heat and set aside.

Bring a large pot of salted water to a boil. Add potatoes and carrots. Cook for 20 to 25 minutes until the potatoes and carrots are well done or even slightly overdone (they will be easier to mash). Drain and place in a salad bowl. Mash with a fork, a potato masher, or any other manual utensil. It is important not to use an electric mixer because the texture should remain slightly chunky.

Add the bacon bits and let the butter melt on top of the mashed vegetables. Add cream and nutmeg. Season with salt and pepper. Toss well and serve.

If you’ve ever lived in Japan for any longer than a couple weeks, chances are high that you’ve had this amazing dish. There are many different kinds of korokke, each named for the ingredient. This dish is potato korokke. It evolved from the French croquette, which was introduced to Japan in 1887. Croquettes are made with cream, but since dairy processing wasn’t a huge part of Japanese culture when croquettes were introduced, the cream was substituted with mashed potatoes. Are you excited for these deep-fried mashed potatoes? I am!

Boil potatoes until softened. Test with a skewer—they’re ready when the skewer goes through easily. Drain and mash potatoes while they are hot.

Heat some oil in a skillet and sauté onion and beef until cooked. Mix mashed potatoes, onion, and beef in a bowl. Season with salt and pepper. Let cool.

Make flat, oval-shaped patties, coating each piece with flour. Dip in beaten egg and coat with panko. Deep-fry in about 350°F oil until browned.

Funeral potatoes are my husband’s favorite food, despite the rather bleak name. No one is quite sure where they originated, but the common lore is that the Relief Society, an organization of women within the Church of Jesus Christ of Latter-day Saints, started making it for funeral dinners and luncheons. Since they can be made in large batches and frozen for later, funeral potatoes are the perfect dish for a large gathering. The ultimate comfort food, funeral potatoes are to die for. Don’t want to try it? Well, it’s your funeral.

Preheat oven to 350°F. In a medium-sized skillet, add 2 tablespoons of butter and sauté until the onions are translucent. Add the garlic and cook until fragrant. Remove from heat and set aside.

Melt the remaining 4 tablespoons of butter and mix with the cornflake cereal. Sprinkle evenly over the top of the casserole.

Bake for 50-60 minutes or until cooked throughout and bubbly.

Samosa is one of those foods that doesn’t have an “official” recipe, because people just make it with what they have on hand. It is often made in both Middle Eastern and African countries. It uses both vegetables and meat, but feel free to substitute whatever you’d like instead. They also freeze well, so you can save them before or after frying and have an easy meal later.

In a bowl, mix the flour, salt, and vegetable oil together. Slowly add in the water until the mixture forms a pliable dough (so it can be easily molded). Cover with a moist cloth and set aside for 20 minutes.

Divide the dough, roll it into equal-sized balls, and then cover them so they don’t dry out. Take one ball of dough and roll it out with a rolling pin on a flat surface until it is extremely thin.

Divide the rolled-out dough into two halves. Take one half and form a cone. Mix a little flour with water to form a glue-like paste, then rub it between the overlapped edges to keep the filling inside once you start frying. Fill the cone with the potato filling, then seal completely by pinching the opening together. You can add a toothpick as well, but it’s not necessary. Repeat the process with the other dough balls.

Heat the vegetable oil in a medium-sized frying pan until hot (about 2 minutes). You can check the oil temperature by dipping the handle of a wooden spoon into the oil. When the oil starts steadily bubbling, then the oil is hot enough for frying. Drop in the samosas in batches of five or six, but make sure you don’t crowd the pan. Deep fry till they are golden brown & crisp. Transfer onto a paper towel to drain off the excess oil. Serve hot with ketchup, or enjoy plain.

Peel, wash, and dice the potatoes. The smaller you dice them, the better they will fit in the samosa. Boil in just enough water to cover the potatoes and add ¼ tsp. salt. Boil for about 10 minutes till they soften, then drain out the excess water. 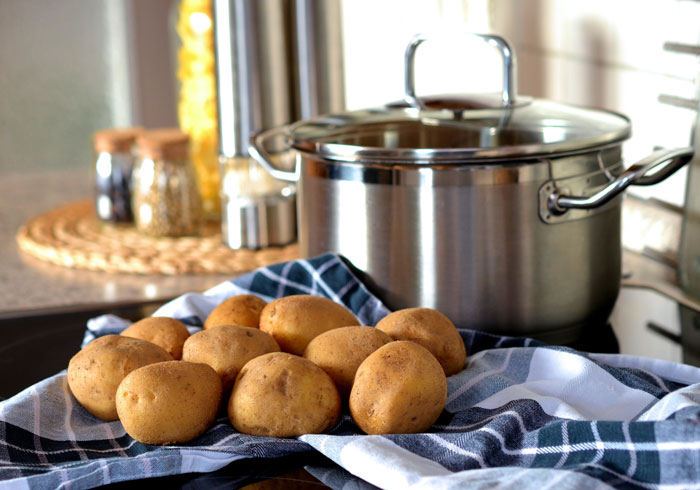