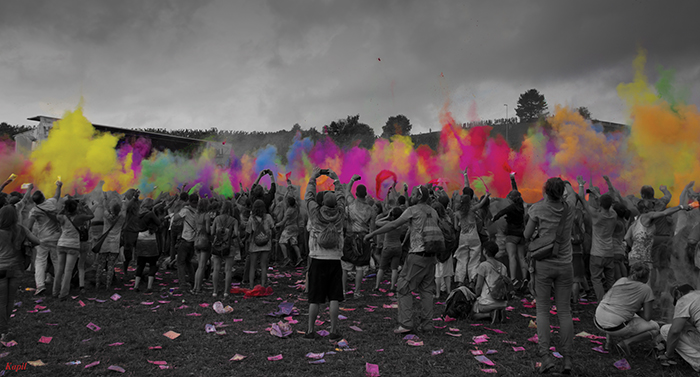 The world is diverse, and the world’s celebrations are just as diverse. But there are some things that are universal among all people, including a desire to respect what matters and to let loose and have fun.

So, as you decide when and where to travel (or even just so you feel more knowledgeable about people different from you), here are some cool festivals around the world, both serious and not-so-serious. 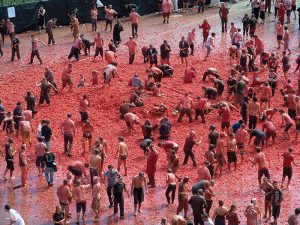 Throwing food is frowned upon in our American culture. At least for me, the first image that comes to mind when I hear “food throwing” is a poor medieval peas-ant being strung up in the stocks and getting rotten fruit thrown at him or her.

But, if taken out of that context, doesn’t the concept of chucking tomatoes at each other just seem . . . fun? The Spanish certainly thought so, and so they created a festival to live life the way it was meant to be lived: thus was born the Tomatina.

Literally meaning “little tomato,” the Tomatina is just people experiencing the pure joy that everyone has imagined since they were kids—the ultimate bloody red food fight.

Of course, there are rules surrounding this glorious festival, the main one being that tomatoes must be crushed before being thrown. This makes sense, because a festival meant to exist entirely in good fun shouldn’t be leaving all of its participants with battle wounds. Still, this festival, combined with the Spanish running of the bulls, shows how good the Spanish are at enjoying life.

Mexican Day of the Dead

If you’ve ever seen the Disney-Pixar movie Coco, you already have a good idea of what the Day of the Dead, or Día de los Muertos, is like. But let me tell you—this is really a beautiful festival.

The Day of the Dead is celebrated on November 2nd, and it commemorates those that have passed. During this festival, people celebrate the new life of the dead, because they see death as a beginning and not an ending.

Most of the traditions surrounding this holiday come from the sentiment of life. Young boys dress as old men to connect with their fathers before them. Children and adults alike decorate sugar skulls with butterflies to show the beauty of the things that were once alive. Old age and death are representations of the beauty and power of life—the belief that as long as descendants remember their ancestors, their ancestors live on.

Respect for ancestors is built into Mexican culture, and this respect is nowhere more visible than on the Day of the Dead. It is definitely a time of happiness and celebration, but it is almost a sober happiness—one filled with gratitude. And for me, at least, that is something that is really touching.

This mud festival is based in South Korea, in a region with mud known for its rich mineral composition. Originally, this festival was conceived to encourage people to buy a certain brand of cosmetics. But as people experienced the raw joy that comes from romping in mud, the festival expanded into something that is culturally integrated.

The festival takes place over a two-week period, but it is in the last weekend that all of the mud-related partying really gets intense. Truly every child’s messiest fantasies come to life in the mud activities, including mud slides, mud baths, and mud fights. But what could be more exquisite than occasionally throwing off the bounds of society and just melding with the earth? So poetic.

This South African festival is ten days long, right in the middle of either June or July. The main draw of the festival is exactly what it would seem to be from the name: oysters. Throughout the entire festival, there are thousands and thousands of oysters available for people to enjoy alongside various wines.

People from regions around gather to partake in the oyster-palooza, participating in hundreds of activities over the ten-day period. The festival is accessible, too: there are free shuttles to help cart people around and daily wholesome, educational activities available for kids.

What makes this festival even more remarkable, other than the pure joy that it incites in people, is that it is not entirely indulgent—the oyster festival and its activities support local nonprofit organizations. So, for every activity someone pays for, people in need are benefiting.

This gorgeous festival is more commonly known in English as the Festival of Colors. Unlike a few of the other festivals mentioned in this article, Holi is a much more geographically wide-spread festival. This is because, while the festivals are mostly centered in India, Holi is a Hindu religious festival.

The themes of Holi are beautiful: they include color, love, and fertility—especially as it is partially celebrating the beginning of spring. Interestingly, what people normally think of as the festival of colors is actually only the second part of the traditional Holi festival. The first part, called Holika Dahan, is a much more sober affair that takes place the night before the colors are thrown. In this quieter festival, little pallets of wood and dung are burned to celebrate the other main part of Holi—the idea of good triumphing over evil.

Then, the next day is when the festival of colors, or Rangwali Holi, takes place in big public spaces. While this part of the celebration is still rooted in religious beliefs, it is a time of celebration and joy. After all, similar to throwing tomatoes, there is something young and joyful that comes out when it is given the chance.

It may not always be practical to attend every festival there is in the world—after all, there really are a lot. However, if anything else, just learning more about the festivals that a culture has can tell you what things that culture values. That experience is eye-opening and perspective-broadening, and, in the end, it will help us love our fellow man just a little more.