The stereotypical nagging parent says, “Keep your elbows off the table and chew with your mouth closed.”

From a young age, all of us have been taught the “correct” way to eat. It’s a surprise to no one that the rules we learn (no elbows on the table, don’t slurp your soup/noodles/drink) are more a product of culture than any universal law.

If you ate the way that is culturally appropriate in the United States, would it still be appropriate in other countries? Let’s take a little trip and find out.

Japan appreciates noisy eaters. Especially when eating noodles, you should slurp to show how good they are. One tip: it’s easier to slurp when you eat with chopsticks. If the idea of eating with chopsticks is intimidating, don’t worry—most Japanese restaurants and households also have forks available.

Remember to pick up the bowl to eat when you can. You won’t make as much of a mess, and if you’re using chopsticks, you don’t have to work nearly as hard. In general, avoid leaning over your dish. The Japanese think it makes you look like an animal.

Chopsticks are not always the utensils of choice. The Japanese use spoons with soups or with rice dishes that are paired with sauce. For example, both curry on rice and fried rice would be dishes eaten with a spoon.

In Brazil, use utensils for everything—even for foods you would normally eat with your hands. If you have to eat without utensils, make sure to wrap your
food in a napkin so your hands don’t make contact. Also, never eat and walk. If you buy something from a street vendor, stay there to eat it.

Brazil has a very family-centered eating culture. Even the poorest family in Brazil will throw food parties for family events. When you take a bite of Brazilian food, taste the love cooked into it.

While they do have utensils, Indians believe that the flavor of their food is best enjoyed when eaten with their hand. However, when eating, be sure to use only your right hand. The left hand is considered dirty.

In rural areas, they sit on the floor to eat. But at restaurants, they use chairs. Indians show their appreciation for a meal by cleaning their plate. As such, if you put something on your plate, you need to eat all of it. Otherwise, you signal that you do not like the food.

Somalian food culture is highly influenced by its religious culture. In Somalia, the majority of the population is Muslim, meaning they follow some rigorous dietary restrictions. There are two main groups of food: halal, or accepted foods, and haram, or forbidden foods. Similar to the Jewish culture and religion, the main forbidden foods are pork products, blood, and animals which are not killed correctly.When visiting Somalia, generally avoid discussing food and food preparation with men, as they consider food to be a womanly topic. However, if you get the chance, compliment the person (likely the woman) who made the food—the various pancakes and fried breads of the Somalian diet are delicious.

Italians expect food to be eaten the way it is “meant” to be eaten. Unlike in restaurants in the US, where it is normal to ask for substitutions, the idea of changing a traditional food can be offensive to Italians. Those of you with food allergies and intolerances be aware of this. Italian meals are often com-posed of multiple courses, and even in Italian homes, each course is served on a different plate. They do not want the dishes to mix.

This is just a brief overview of cultural food practices, but when you travel, do your research. You’ll find plenty of new ways to eat that you may never have considered before. 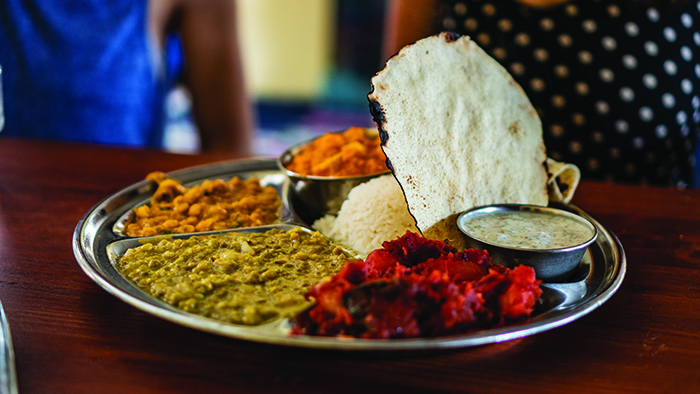