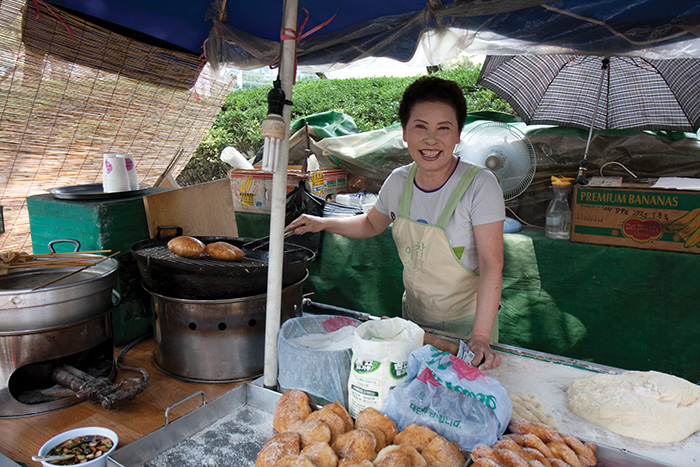 If you had asked me when I was younger what my favorite place in the world was, I would have told you Rock Mill Park. It was a small park no more than three miles from my house with a quaint pavilion and cement trails that wound through the woods. It was somewhere I could go alone, and I went there often—to read, to bike, to run. That little park was easily my favorite place in the world. Back then, my world was pretty small.

It wasn’t until I was older that I realized my favorite place had been waiting halfway across the world—in Seoul, Korea. I grew to love the ornate palaces, the steep hiking paths that drove straight up the mountains, the free concerts every night in Seoul plaza, and the crowded markets with fresh dumplings and trinkets. But the most memorable place in Seoul was a small, street-side doughnut stand located a couple blocks from our hotel. We stopped almost every day on our way to the subway station to get some freshly fried doughnuts filled with red bean paste. The older Korean woman at the stand didn’t speak a lick of English, and our Korean started at “hello” and ended at “thank you,” but every day when she saw us coming, she’d stick our doughnuts in her vat of oil so they’d be hot and ready when we arrived. When our last day in Korea came, we were sad to leave our friend. We got a picture together and hugged. We weren’t sure how to tell her it was our last time, but maybe she knew.

That’s when I realized that my favorite part of travel is building relationships: with places, with food, with cultures, with people. I felt an affinity with the saying of Anita Desai, “Wherever you go becomes a part of you somehow.” When you travel, you find a second home to travel back to, whether it is in the highlands of Vietnam with the Vietnamese natives, or in European hostels with your fellow travelers. You find food that you love so much it becomes part of your holiday traditions for generations, whether it be the delicious samosas from Kenya or the mangosteen fruit from southeast Asia. You learn about other faiths and other cultures that shape your view of the world as you visit the religious landmarks of the US or the famed Angkor Wat temple complex in Cambodia. Eventually, whether coming or going, you will always be homeward bound.

When my family first arrived in Korea, we would speak often of home: of homemade chocolate chip cookies, of the moss-covered trees in our backyard, and of the winding roads that snake through the hills. But sometime between the time we arrived and the time we left, “home” stopped referring to my house near Rockmill Park. Instead, “home” began to be the tiny, two-room apartment near the Insadong marketplace in the concrete metropolis of Seoul, Korea, beside a small, street-side doughnut stand.