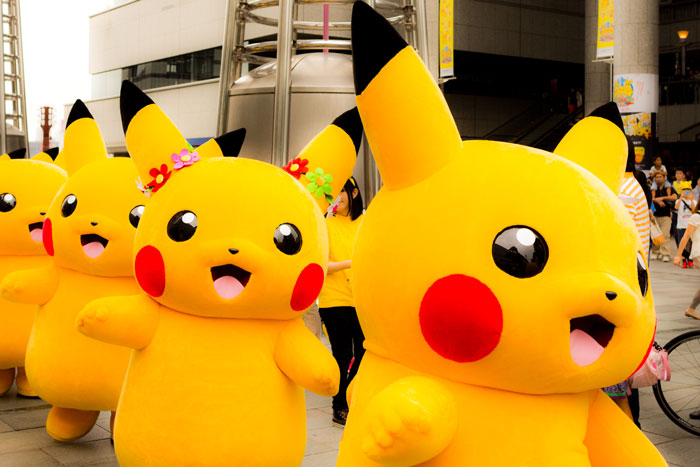 Every year, more than a thousand of the popular Pokémon Pikachu march in perfect sync through Yokohama, Japan, as part of a week-long festival.  You may have seen some videos of them on YouTube, perhaps with the “Imperial March” playing in the background. This procession took Japan by storm for the first time in 2014 and has since become a major tourist attraction for Pokémon fans around the world.

In 2014, a relatively small parade of twenty Pikachu marched around the streets of Yokohama, coinciding with giveaways of some Pikachu-centered merchandise, and since then, the celebration has exploded in size and popularity. The march in 2018 even included Eevee, another popular Pokémon from the original bunch, as well as hidden Mimikyu, a new Pokémon that has a Pikachu costume on. Ditto, a Pokémon that can transform into other Pokémon, also made an appearance. In addition to the parade, there were various other activities, such as a water show that soaked viewers and a light show that showed off the Pikachu marching in the dark.

Since the advent of the mobile game Pokémon GO, special Pokémon also have appeared in-game for visitors of Yokohama. This adds a new interactive addition to the event to get any Pokémon fan involved, old or young.

The best part of the event? The majority of the celebration is completely free! Aside from small ticketed sections at events such as the light show, all you have to do to participate is show up. Or, of course, you could always stay home and watch the highlights as participants record the shows for all to see, but where’s the adventure in that?