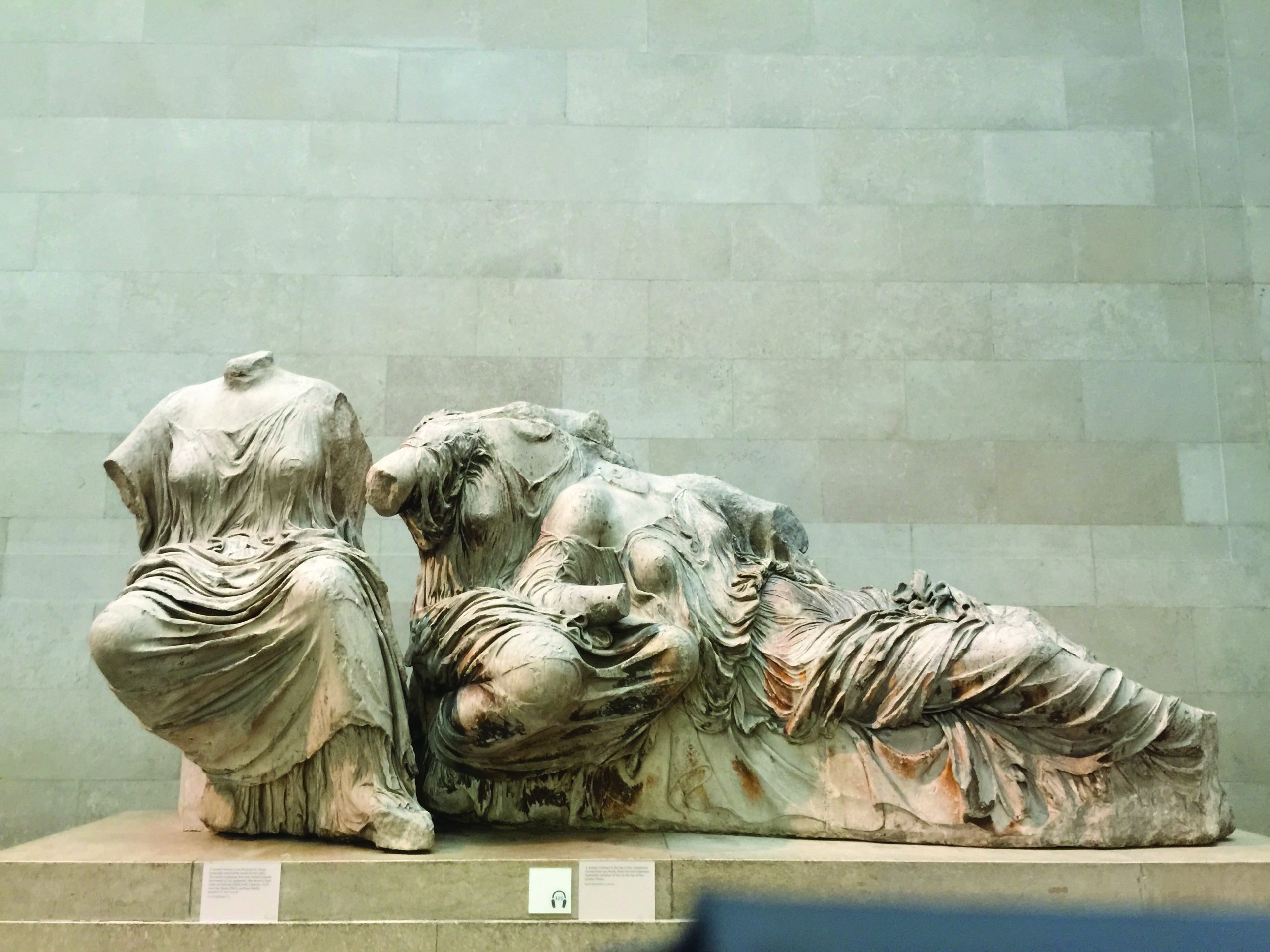 In 1911, three men slipped out of the Louvre Museum in Paris with the Mona Lisa tucked under one of their arms. This theft turned a lesser-known da Vinci painting into an overnight sensation—Mona Lisa’s coy smile only added to her mystique. While this, the world’s most famous art theft, was straightforward, in reality, “stolen art” involves a great deal more. Most forms of art theft revolve around stories of the conqueror and the conquered. Sometimes, stolen art adorns the wall of a world-famous museum, complete with a plaque that reduces the entire history of the people the piece was taken from down to a three-sentence informational blurb.

The theft and destruction of cultural artifacts can be traced throughout history. Beyond the toll on pieces themselves, such acts are destructive to a nation’s cultural heritage. No story captures the complicated political, social, and legal implications of cultural art theft better than that of the Parthenon Marbles.

Art Theft and the Acropolis

If there is one thing the United Kingdom is known for—apart from the queen’s corgis—it is the country’s long, dark history of conquest and human rights violations. The UK didn’t only take over lands and people, it also staked its claims on the beloved art from those civilizations. This was the case from 1801 to 1812 when the Parthenon Marbles (often called the Elgin Marbles) were stolen from the Acropolis, in Athens, and shipped to the UK.

The Parthenon, the crowning jewel of Athenian Acropolis, has a tumultuous history of its own. The building was originally constructed in the fifth century BC as a temple to the city’s patron goddess, Athena. The Athenians used the Acropolis as a fortress in a number of wars between neighboring Greek city-states as well as against foreign invaders. The two-thousand-year-old building was later used as a church, a mosque, and, eventually, a gunpowder magazine before a 1687 explosion blew off the roof and the temple fell into disrepair. At that time, Greece was ruled by the Ottoman Empire, which put little stock in Greek national heritage.

It was in this period that Lord Elgin, the British Ambassador to the Ottoman Empire, made his bid for the Parthenon Marbles. He received an ambiguously worded letter of authorization from the Ottoman sultan that gave him permission to study the site. In this letter, the sultan also instructed that “when they wish to take away some pieces of stone with old inscriptions and figures, no opposition [should] be made.” This document became Elgin’s proof of permission to take the Marbles, and to this day, the British Museum uses the letter as proof that Elgin took them legally. Within a decade, Elgin removed nearly fifty percent of the remaining pediments, metopes, and friezes from the ancient temple and shipped them back to England. After holding them in a private collection for much of his life, he eventually sold them to the British Museum.

The British Museum Trustees argue that the Marbles are their legal property because they purchased them from Lord Elgin’s personal collection in the 1800s. They further claim that Lord Elgin did the Greek people a service by preserving the Marbles: in the years before the ambassador’s involvement with the Parthenon Marbles, the building was plundered extensively. The 1687 explosion serves as further evidence that the Marbles were not safe on the Acropolis and that they would not have been preserved in the decades that followed because of the persisting political instability in the region.

In contrast, the Greeks argue that the Ottomans, as a conquering force, had no legal right to give away the Marbles—if that is, in fact, what the sultan even intended in his letter. This means that when Elgin took the Marbles, he was committing theft and that theft should be rectified by the British government. The Greeks also argue that during the supposed “rescue” of the marbles, Lord Elgin’s team damaged the artifacts. This argument discredits the British stance that the Marbles were safer in Elgin’s hands.

Perhaps the most compelling arguments proposed by either side concern the context in which the artifacts are displayed. The British Museum tells the story of the development of civilization. The British argue that the Marbles are best understood in the context of the larger human story. So in the UK, the Marbles are housed alongside other major artistic and historical artifacts, including the Rosetta Stone, the death mask of Sutton Hoo, and ancient Assyrian lamassu.

After the Greeks finished the Acropolis Museum in 2009, Greece argued that the Parthenon Marbles should be reunified in the museum a mere three hundred meters away from their original location. The special exhibition space inside the Acropolis Museum, designed with glass walls and display platforms in the exact proportions of the original Parthenon, allows visitors to view the artifacts in their original context. Since they are Greek artifacts and a vital part of the Athenian story, the Greek argument for reunification is a more substantive claim for the Marbles.

In 2016, Greece brought the case of the Parthenon Marbles before the European Court of Human Rights—the first legal bid by the Greek government to return the Marbles to Greece. However, the case was ruled to be outside the jurisdiction of the court because the alleged theft happened so long ago. Despite the 200-year absence of the Parthenon Marbles, the Greeks are still hopeful about their return.

Many British citizens also believe the Marbles should return to Greece. Prominent among this group is British Minority Leader Jeremy Corbyn, who said to a Greek newspaper that “As with anything stolen or taken from occupied or colonial possession— including artefacts looted from other countries in the past—we should be engaged in constructive talks with the Greek government about returning the sculptures.” Pro-restitution sources insist that the majority of the UK population agree with Corbyn that the Marbles should return to Greece.

Even so, the board of trustees for the British Museum stand firm against the tide of public opinion. In 2014, they refused an offer to resolve the issue with the United Nations Educational, Scientific and Cultural Organization (UNESCO) as a mediating body.

The case of the Parthenon Marbles may appear to be an isolated controversy between the UK and Greece, but it represents a larger piece of British history and the British identity. The United Kingdom holds the largest collection of aboriginal artifacts outside the continent of Australia, which were stolen during colonial occupation. They also retain priceless pieces from their occupations of Asia and the Middle East. If they decide to give in to Greek demands, there is no telling what would become of the British Museum.

It is important to note that art theft is not an issue of centuries past. Artifacts disappear without a trace all the time, especially in conflict zones.

One of the largest instances of art theft in living memory was perpetrated by the Nazis, who confiscated twenty percent of European art in the 1930s and 1940s. “Degenerate art,” which included works by Picasso, Matisse, Monet, and countless others was looted from museums and private collections. While much of the art was recovered after the Allied victory in WWII, some pieces were destroyed or are still missing. A new cache of lost pieces was recovered from a Munich apartment as recently as 2011.

In a 1954 convention, UNESCO established regulations for the protection of “cultural property.” The agreement condemns the damage of artifacts and historic sites because “any damage to cultural property, irrespective of the people it belongs to, is a damage to the cultural heritage of all humanity, because every people contributes to the world’s culture.” Under today’s international law, Lord Elgin’s actions would not have been permitted by the UK, yet war-torn nations like Syria cannot ensure the same protections for their cultural property that European nations can afford.

ISIS has a well-documented history of stealing artifacts and selling them to support their military efforts. These “blood antiquities” present a constant challenge for UNESCO. In addition to selling artifacts, the Islamic State perpetrated an act of terror directly against cultural property when they blew up sites in Palmyra, Syria, in 2015. The connection between art and cultural identity is so strong that it presents a threat to fundamentalist terror organizations. Pieces destroyed by Nazis and ISIS cannot be recovered; they are lost forever in heinous acts of cultural vandalism.

The term Elganism now means “the taking of cultural treasures, often from one country to another.” Lord Elgin’s legacy is not one of artistic research but one of theft and destruction. Even though the Parthenon Marbles remain intact, they are separated by over two thousand miles from their home. The fight for the Marbles is ongoing, but protections for cultural heritage have never been stronger, and they will continue to strengthen as more people learn the dark reality of stolen art.