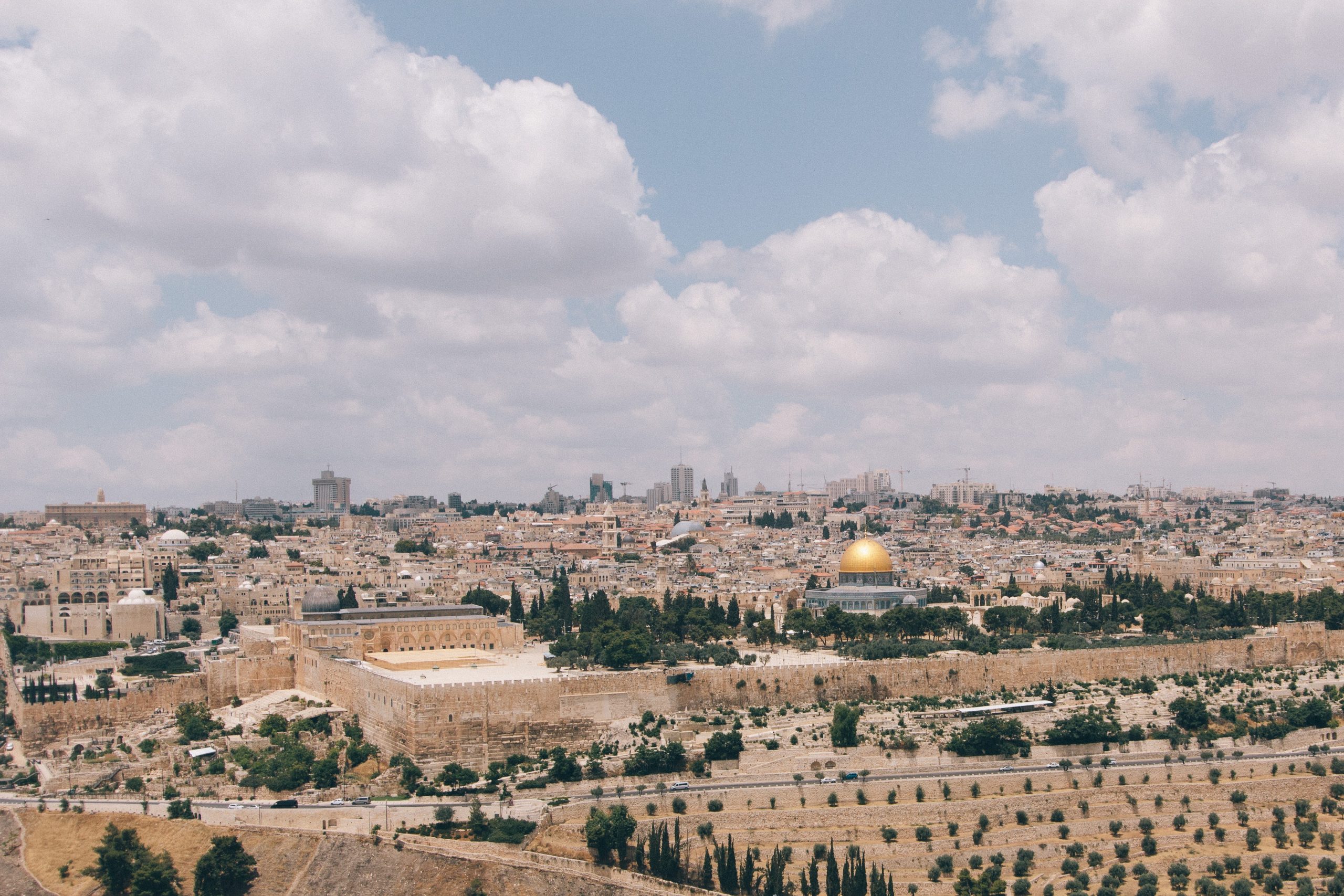 Introduction
Jerusalem is a wonder. While the Islamic Call to Prayer sounds at midday, Jews are praying at the Western Wall. Above the wall is the Dome of the Rock and Al-Aqsa Mosque where Muslims gather to worship, and beyond that is the stunning Mount of Olives, with a cemetery that has been important to Jewish tradition for 3000 years. Christians on that same mountain kneel at pews or stand worshiping in churches built by Roman Catholic, Lutheran, Russian Orthodox, and Franciscan denominations, among others.

Back in the Old City, the Church of the Holy Sepulchre is just across from the Mosque of Omar, and minarets and crosses dot the rooftops as well as Israeli flags sporting the Star of David. The city is divided to give each faith space to worship, but with so much history and sacred commemoration in one place, there are many locations where different religions are just a few feet apart.

To see so many beautiful manifestations of faith revering Jerusalem in different ways in such close quarters is astonishing, but the city has been a place of conflict for centuries. Everyone believes they have the greatest claim to the city because of their holy places, and members of minority groups throughout history have often been left unable to access their own places of worship. Conflicts have endangered the holy sites of all three Abrahamic religions, and now places such as the Old City of Jerusalem and its walls have been included on the UNESCO List of World Heritage in Danger.

The Jewish faith is prominently featured in Jerusalem. With the rising emergence of the State of Israel, Jerusalem has become a place to celebrate Judaism and remember how the city was the home of Jews anciently, in the days of King David and others.
This celebration of heritage was not always so eminent in the holy city. In fact, most of the Jews now living in and around Jerusalem have ancestors who came to live there during an Aliyah, a period of immigration to Israel, within the past one hundred years or so. Jerusalem was declared international territory, but it seems to be largely under Jewish dominion now that there are more Jews than Arabs living in the city. Through this recent Jewish influence, the city has been reborn to reflect more pride for Jewish culture.

Before the waves of Jewish immigrants in the 1900s, the city was under Arab rule. As the British Mandate and Balfour Declaration helped more Jews immigrate to Jerusalem, tensions mounted. In 1948, war broke out to determine who would control the country, and the war put Jewish holy sites and other sacred locations at risk. The Hurva Synagogue, a grand and beautiful place of worship, was specifically targeted and destroyed.

Following that war, the Western Wall, now viewed as the most sacred site in Judaism, became completely inaccessible to Jewish worshipers, because the Arabs controlled that part of the city. The Western Wall is also a reminder of an earlier conflict, because many believe it was the perimeter of the Second Temple that was destroyed. So many Jewish rituals and traditions point to Jerusalem and the razed temples. The Jewish people remember their forefathers, the suffering of years in exile, and the destruction to the city they love.

Today Jews find joy returning up to Jerusalem. They explore the City of David and learn about ancient Jewish people in archaeological excavations. They visit the rebuilt Hurva Synagogue and leave written prayers in the cracks of the Western Wall, stepping away backwards out of respect. In synagogues, boys with long sidelocks wearing tefillin for the first time make bowing motions with men in prayer shawls or hats. These people care deeply about what they have reclaimed in Jerusalem. Theirs is a proud heritage, full of beautiful traditions. They deserve to stride with confidence and know that they won’t lose the holy sites they have now.

Every day in Jerusalem the Adhan, the Islamic Call to Prayer, echoes through the streets as it is broadcast from rooftop minarets. The melodic summons declares that “God is great,” and thousands of Muslims in the city heed the call. Some worshipers lay out prayer rugs in public, though many prefer to pray in the mosque or the privacy of their homes. The Call to Prayer is especially poignant in this city with the Al-Aqsa Mosque, the third holiest place in Islam. Muslims revere the mosque as the location of the prophet Muhammed’s sacred Night Journey, a revelatory experience in which he conversed with prophets in the heavens.

On the same mountain as the Al-Aqsa Mosque, the Dome of the Rock stands as a shrine built to honor the place of Abraham’s sacrifice. This is one of the oldest Islamic religious sites, since it was built in the seventh century CE, and its golden top can be seen from every direction. Ornate Arabic script written on the monuments of the Al-Aqsa Mosque and the Dome of the Rock call for reverence just as the Call to Prayer does.

Even aspects of Islamic worship such as the Call to Prayer have been heatedly debated in the area, though, as recently laws have been considered that would suppress or prohibit the use of the loudspeakers at times when the Call to Prayer is done. And the Islamic population that finds itself a minority next to the Jewish population finds that its access to religious sites such as the Al-Aqsa Mosque and other mosques may be threatened.

Houses that once sheltered Muslim families just below the sacred Al-Aqsa site were destroyed to make way for the Jewish square that now allows for worship at the Western Wall, and even now the Kotel tunnel excavation that further explores the wall threatens existing structures in the Muslim quarter above the tunnel. Many have been forced to relocate to live farther away from their holy sites.

Those traveling to Jerusalem from areas outside Israeli control are subject to border patrol, which can be uncomfortable, demeaning, and sometimes fruitless as access is ultimately prohibited altogether for some of them. This is a difficult problem for many Muslims especially at Ramadan when everyone wants to visit Jerusalem as part of the observance associated with that time of year. Many are not allowed to do so under the State of Israel’s regulations, as there have been age restrictions and other stipulations keeping Muslims from entering the city to worship, regulations designed to protect the city from Palestinian attacks.

Another worshiping difficulty arises because part of the Christian Via Dolorosa, a street that is said to be the path Jesus walked to the cross on his last day of life, goes through the Muslim Quarter. On Good Friday each year, Christians pack the street as Muslims try to squeeze through to a place where they can worship.

The way that Muslims worship by prostrating themselves before Allah in humble prayer is a remarkable thing, and the Dome of the Rock shines for all to see as a reminder of what beauty Muslims have added to the city. The Islamic heritage is inspiring and important, and Muslims deserve to have their place in the city to access to their beloved mosques and holy sites.

The Church of the Holy Sepulchre (Photo by Jorge Láscar)

Just as Jerusalem is venerated by Jews and Muslims, it is also one of the holiest places for Christians. Christians view Jerusalem as the site where Jesus Christ died and was resurrected. For them it is beautiful to remember Christ’s sacrifice and think of the miracles and teachings of the Bible that occurred in Jerusalem. At times a processional of priests goes down the streets, swinging incense or clanging staffs against the cobblestones as they pass. Franciscan friars in the crowded market each wear a telltale dark habit and knotted cord at the waistline that represents vows to God.

Christians, too, have struggled to maintain fair access to their holy sites. On Palm Sunday, a day that Christians celebrate by walking the path that Jesus trod to enter Jerusalem, Christians are forced to walk a shorter distance than they traditionally have because they are not allowed to go through a gate in the separation wall that marks the Palestinian border, a gate that has remained closed because of the conflict between Israel and Palestine. Palestinian and Armenian Christians also struggle with border control and documentation difficulties, along with territorial disputes.

Long ago crusaders caused strife for other religions by fighting to control the city, and today Christians of some denominations have made it hard for other Christians to worship fairly. Many arguments have arisen over which sect should control which part of the Church of the Holy Sepulchre, one of the most important sites in Christianity because it is believed to be the place where Jesus Christ died and was buried. There, pilgrims caress the rock where it is said Jesus lay. They pray at the ornately decorated hole upstairs where they believe the cross that Jesus died on stood, and they line up in a circular room to see Jesus’s tomb.

Edicule surrounding the tomb of Christ (Photo by Alexa Benavides)

The Church of the Holy Sepulchre is a special place, but also one that is divided. To this day, a ladder left on a balcony more than forty years ago remains perched in the same location on the Church of the Holy Sepulchre, because a “status quo” rule is enforced in the church so that no one can move or alter anything that is in the territory of another Christian denomination. The key to the revered church is kept by a Muslim family to prevent different denominations from fighting over ownership of the site.

Despite their disagreements, Christians strive to demonstrate values of kindness and charity. Their faith inspires many good traditions and principles as they try to follow the example of a man who taught about mercy and love for others. All Christians should have the right to remember Jesus Christ and see this place where he lived and died.

Conclusion
The Arabic name for Jerusalem is Al-Quds, meaning “the Holy” or “the Holy Sanctuary,” and the Hebrew name for Jerusalem, yerushalaim, is related to the word “shalom,” meaning “peace.” Christians revere the city awaiting the return of Christ as the King of Peace. Peace and holiness should be considered together to create a safe and harmonious place for all who wish to worship in Jerusalem.