A Royal Day Out

When you think of English royalty, a few images might come to mind: Queen Elizabeth outfitted in a bright dress and matching hat, Prince William and Duchess Kate on their wedding day, or a black-and-white image of an elderly Queen Victoria. To most tourists in London, the only essential royal site to visit would be Buckingham Palace with its famous columned façade and marching guardsmen. To a royal enthusiast, however, London offers a wealth of sites steeped in regal history. With a bit of guidance, any tourist can become a royal enthusiast and have an extremely rewarding time discovering the well-known and little-known royal sites throughout London.

Even though this site is frequently in the limelight, no royal enthusiast could complete a trip to London without seeing the residence of the Queen and her husband. Buckingham Palace has been the monarch’s official home since a young Queen Victoria moved there in 1837. A tourist on a budget can choose to remain outside the Palace to watch the Changing of the Guard in the morning, or simply watch the guardsmen march back and forth behind the gates. Those willing to spend the extra money can take a tour of Buckingham Palace’s state rooms as well as the Queen’s Gallery and the gardens. However, most of these are only open during the summertime when the Queen stays at her Scottish residence in Balmoral Castle. While outside Buckingham Palace, remember to turn with your back to the palace and notice the large monument in the middle of the fountain. This is the Victoria Memorial, and it celebrates the reign and successes of the illustrious queen.

Be sure to look at the flag on top of the palace. Most of the time, the famous Union Jack will be flying. If you instead see a red, yellow, and blue flag divided into four parts, then you are looking at the Royal Standard, which indicates that the Queen is currently in residence at the palace!

This lesser-known royal residence sits near the shore of the Round Pond in Kensington Gardens. Touring this park is free, as are certain sections of the palace’s gardens, including the serpentine walk that leads up to both the Sunken Garden and Orangery Gardens. Kensington Palace has been a royal residence since the late seventeenth century. In fact, Queen Victoria grew up here, and there is a specific tour that takes visitors through the rooms where Queen Victoria was born, held her first Privy Council as queen, and first saw her future husband, Prince Albert. All tours offered at Kensington Palace are much cheaper than the tour at Buckingham Palace and include information on the lives and experiences of several other royal residents, such as King William and his wife Queen Mary of the seventeenth century, Princess Margaret (Queen Elizabeth’s younger sister), and Princess Diana. Currently, Prince William and his wife, Catherine, live in Apartment 1A at Kensington Palace with their three children. This apartment can be seen directly to the left of Kensington’s main façade.

Stop for tea and a quick bite to eat at the Orangery. The Orangery was built under the direction of Queen Anne to house her royal orange trees in the winter. In the summer, the trees were transferred out to the terrace, and the Orangery was used for balls and ceremonies. Today it is an elegant and moderately affordable spot for tea and fine dining. 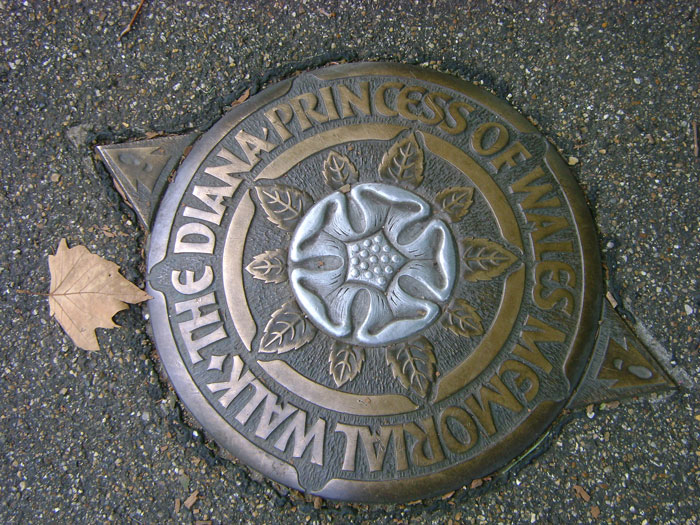 For those who may not know, Princess Diana was married to Prince Charles, the son of Queen Elizabeth and first in line to the throne, and was the mother of Princes William and Harry. She was a champion for many charities and led the way in abolishing the stigma around AIDS patients. Tragically, she was killed in a car crash in Paris in 1997. To honor her life and her legacy after her death, a seven-mile memorial walk was dedicated in her memory in the summer of 2000. The path runs through four adjoining parks—Kensington Gardens, Hyde Park, Green Park, and St. James’s Park—and is marked on the ground with a series of etched aluminum roses. This walk takes visitors past several palaces and royal houses as well as more intimate sites associated with Princess Diana’s life. The Diana Memorial Playground was dedicated in memory of Diana’s love for children, and it is open to the public (though only adults accompanied by children may enter). The quiet beauty of the Diana Memorial Fountain reflects the Princess’s life and openness to the people, and is also included in the Memorial Walk.

Walk this path after touring Kensington Palace—particularly the section of the tour that concerns Princess Diana. The route runs directly past the palace and will provide visitors with a deeper and more reverent appreciation for the Princess’s life and legacy. Along the way, take note of the mountainous Albert Memorial and the Royal Albert Hall, both built in memory of Queen Victoria’s husband. 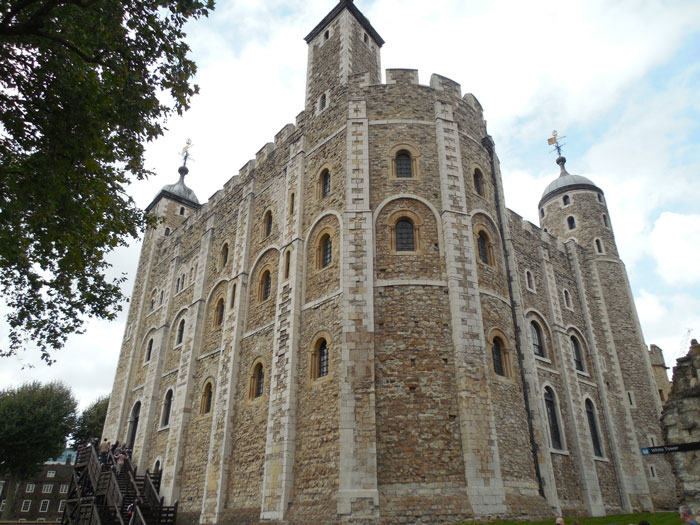 The Tower of London’s White Tower. Photo by Doug Kerr

This massive structure dominates a section of the skyline along the River Thames. The Tower was established by William the Conqueror in 1066 and has played many roles since then, most notably those of palace, military fortress, prison, execution site, menagerie, and home of the Crown Jewels. A visitor can easily spend an entire day exploring the enormous tower with its millennium of history, but there are a few specific sites that a royal enthusiast absolutely must see. The Crown Jewels are a large set of maces, scepters, crowns, robes, jewelry, and other coronation tools collected by English kings and queens since the 1660s. The two largest diamonds in the world are embedded in the Crown Jewels, one in the Royal Scepter and the other in the Imperial State Crown. After seeing the Crown Jewels, take a walk over to Tower Green and visit the spot where a scaffold once stood. This scaffold was used to execute several treasonous royals, among whom were Anne Boleyn and Catherine Howard, two of the wives of the infamous Henry VIII, and Lady Jane Grey, who ruled England for nine days before being thrown from power and killed at the Tower’s scaffold. Last, head over to the Medieval Palace and explore rooms such as King Edward I’s bedchamber and Lanthorn Tower with its assembly of royal medieval objects.

Keep an eye out for a worker dressed as King Edward I, a medieval king. He really enjoys playful banter and especially loves visitors from “The New World.”

All royal enthusiasts, whether amateurs or seasoned experts, can enjoy the regal side of London. Now that you have been given a little bit of history and some interesting tips for exploring a few of the top royal sites, you too can become a royal enthusiast and experience a royal day out in London!