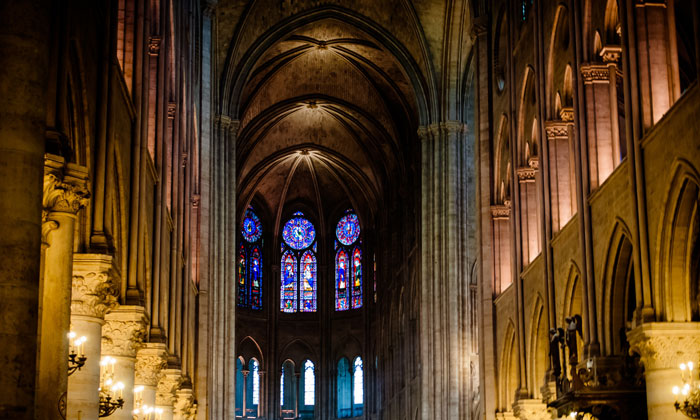 As you walk into a Gothic church, the ethereal atmosphere is immediately evident. The reverent hush and the dark stonework lit by brilliantly colored stained-glass patterns of light create this aura that is completely unique to sacred Gothic architecture. Most people, whether seasoned or amateur travelers, are relatively familiar with Gothic churches. But the symbolism hidden within these centuries-old structures is often lost on visitors. Gothic churches were built with symbolism incorporated into every element. While each building differs slightly in terms of symbolic components, every symbol allows the visitor to have an enlightened and almost otherworldly experience.

Perhaps the most famous of all Gothic structures is Notre-Dame Cathedral in Paris, which contains every constituent of a classic Gothic cathedral. Looking at Notre-Dame’s façade, you can see two soaring towers that immediately draw the eye upward to heaven. These towers are flanked by stone carvings of gargoyles—some of which serve as spouts to drain rainwater, and all of which were designed primarily to show viewers the demons that would surround them in hell if they did not worship in the cathedral. Along with the gargoyles, at Notre-Dame’s entrance there are also three doors, which together reference the Trinity. Each door is topped with a Gothic pointed arch, which resembles a triumphal arch and thus represents Christ’s triumph over the devil.

As you enter the cathedral, it becomes clear that Notre-Dame is built in the shape of a cross, with the entrance placed at the bottom of the cruciform structure. Early Christians saw the symbolism in entering a cross-shaped church: by participating in the church services, they were utilizing Christ’s sacrifice on the cross to ensure their salvation. This main entrance is placed at the west end of the cathedral, which is considered the least holy direction because the sun sets in the west (sunsets to medieval citizens generally referenced death). As you proceed further into the cathedral by walking down the long nave, or main aisle, you head east—the holy direction where the sun rises, where it is believed Christ will come again, and where rebirth, both physical and spiritual, is most possible.

Continuing down the nave, you will notice the incredibly high ceilings and abundance of stained glass along the walls. Both of these elements are meant to evoke a heavenly sense. The eyes are simultaneously drawn upward to heaven and greeted with spectacular, sparkling colors coming through the windows. The Abbot Suger, who is known as the father of Gothic architecture, established this idea of luxe nova, or “new light,” that would transport the viewer from this world to a more heavenly, celestial world. These stained-glass windows are also decorated with biblical scenes that allowed illiterate visitors to understand the stories. Each scene is placed strategically to juxtapose another, allowing the viewer to gain new insights and see connections between all the parts of the Bible.

Towards the eastern end of the nave is the transept, or horizontal part of the cross. Here again the four cardinal directions come into play: The north transept’s stained-glass windows feature scenes from the Old Testament, or time of the old law, because the north typically receives less sunlight. The south transept’s windows depict scenes from the New Testament, or time of the new law, because the south is lit with more sunlight throughout the year. 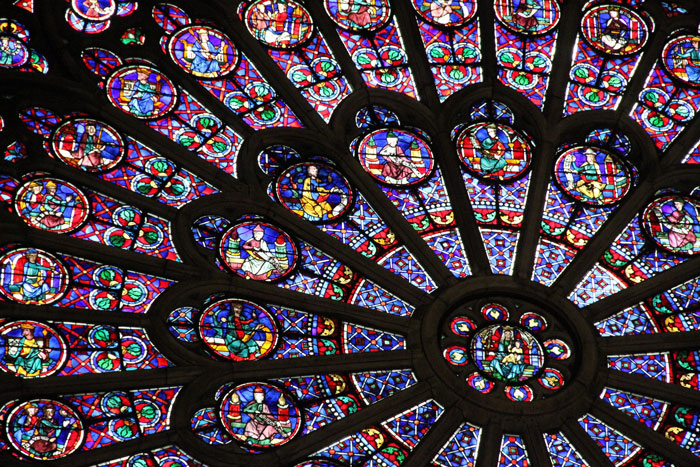 A rose window in Notre-Dame Cathedral, Paris. Photo by RCbass

Standing at this point in Notre-Dame, three large round windows can be seen at the north, south, and west ends of the cross-shaped cathedral. These windows are known as rose windows, and each is dedicated to the Virgin Mary, who was known as “the rose without thorns.” While every Gothic church has at least one rose window, these rose windows are particularly significant in Notre-Dame, whose name translates to “Our Lady”—another reference to the Virgin Mary.

Though there is an abundance of symbolism specific to Notre-Dame, every Gothic church contains the same essential elements. Gothic cathedrals and abbeys are absolutely saturated with symbolism and hidden meaning. Visitors today can travel to Europe and experience the wonderful sense of reverence and devotion that has permeated these structures for centuries through their rich symbols.