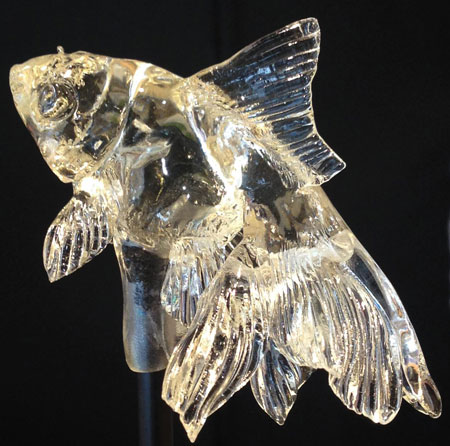 Over one thousand years ago, Japanese artisans sculpted sugary dough into small candy birds, presenting them as gifts for the spirits in early temples. This was the beginning of the cultural tradition of edible art called amezaiku. The word ame means “candy” and the word zaiku means “craft,” so amezaiku literally translates to “candy craft.” During the Japanese Edo Period (1603–1868), this craft became popular at festivals and street markets, giving the common population access to the candy. The ame shokunin, or master craftsmen, created their sculptures in front of crowds, and the candy became more than just a treat—it became a cultural event with a performance and a sweet reward. The sculptures have evolved from small candy birds to lovely, lifelike figures of both animals and fish that display the artistry and skill of the amezaiku masters.

The recipe for amezaiku candy is based on mizuame, a starchy syrup, which is a staple ingredient for many Japanese desserts. Preparing the recipe is a time-consuming process. It can take up to five hours for the sugary mixture to boil, form a taffy-like texture, and become transparent. Once it is ready, the mix is shaped into a large mound and covered until the artisan is ready to begin sculpting.

The dough is kept between 176° and 212°F (80° and 94°C), making it a very hot substance to work with. The artisan takes a small piece from the mound and stretches and folds the mixture by hand (similar to pulling taffy) until it is the proper consistency to sculpt. The artist then places the piece on a wooden stick and begins sculpting the figure using fingers, one-bladed scissors, and tweezers. The artist must work quickly: there is approximately a three-minute time frame to sculpt the final figure before the candy hardens. After the sculpture sets, the artist paints the figure with food dye, bringing the candy to life as a beautiful piece of edible art.

The cultural tradition of amezaiku involves more than just the creation of a delicious piece of candy. The practice is an art form requiring knowledge, skill, and creativity. An artisan learns the craft as an apprentice to a master of the trade. Currently, there are fewer than fifty ame shokunin with knowledge of the recipe and techniques required to create amezaiku. The masters say that learning to handle the intense heat of the mixture without burning their hands is the most difficult skill to acquire, but it is also the most essential. After mastering this step, artisans must learn to recognize the proper texture and transparency of the dough when it is ready for sculpting. Finally, aspiring ame shokunin must cultivate the talent and precision required to craft beautiful figures in the limited time available before the candy hardens.

Using a recipe that is over a thousand years old and preserving long established cultural techniques cultivates a deep respect for the amezaiku tradition. Linda Lombardi of Tofugo’s Japanese culture blog said, “In traditional Japanese cuisine, it’s not enough for something to taste good, it has to look good too. This is particularly true of sweets, which are often just as much a handicraft as a food.” Her statement perfectly depicts the amezaiku relationship between food and art form. The final product must reflect good taste, literally and figuratively. One of the remaining amezaiku masters, Tokahiro Yoshihara, was asked why he chose to be an ame shokunin. He replied, “I want to preserve the profession. There are a lot of people who don’t know about amezaiku, so I want them to notice this one element of Japanese culture.” The Japanese candy artisan profession remains a small but powerful reminder that culture can be retained in many forms, including the sweet tradition of amezaiku.