Splashing into the New Year at the Thailand Water Festival 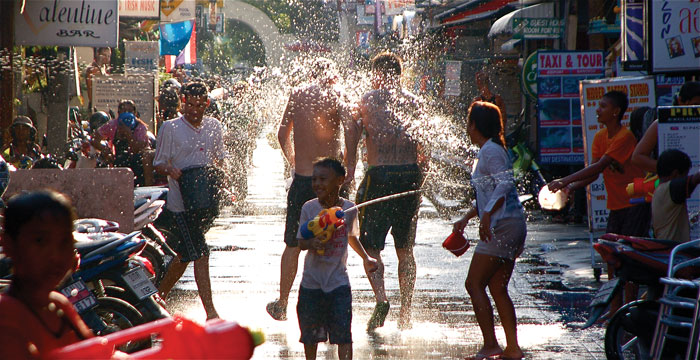 Imagine walking down the streets of Thailand enjoying the magical beauty of your surroundings. You see the ornate temples and hear the birds chirping overhead while you bask in the warm sunlight. And then, all of a sudden, the peacefulness of your moment is shattered—you are drenched in water, head to toe! This is Songkran, also known as Thailand’s Water Festival, and it is a splash that will stay with you for a lifetime.

Chloe Casper, a Brigham Young University student who lived in Thailand for 18 months, experienced the festivities of Songkran twice. With an insider’s enthusiasm for this Thai tradition, Chloe had a lot to say about the Thailand Water Festival. Here are just a few of the things that she shared about this unforgettable New Year tradition.

What is Songkran and why is it celebrated?

“Songkran is one of the biggest cultural celebrations in Thailand. Everyone spends a week throwing water on each other and partying. It is the celebration of the Thai New Year! Songkran is more than just a party though; it is a festival rich with religious tradition and cultural significance.”

A motorcyclist being splashed. CC BY 2.0 (Wyndham Hollis)

When is Songkran celebrated?

“It’s crazy. Everywhere is fair game, but there are often big celebrations in some of the major cities around Thailand. Often a street will be blocked off, vendors will set up shop, buckets of water will be provided to refill water guns, and people will just walk up and down the street spraying each other with water guns and dumping buckets of water on each other’s heads. It can be very cold if someone uses ice water, which they sometimes do. Food courts are usually nearby in order to grab a delicious Thai snack and refuel for more fun.”

Are tourists welcome to join in?

“Tourists love Songkran! I saw as many farangs (foreigners) as I did Thai people! Tourists can join in the secular celebration with the water fight, and, if they desire, they can observe the cultural celebration as well. I say cultural because their religion and culture are so intertwined that they are almost inseparable.” 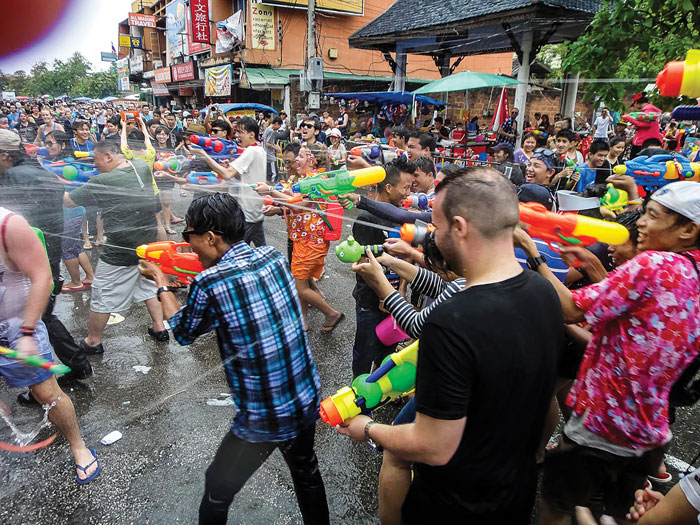 A water gun fight in the streets. CC BY 2.0 (John Shedrick)

What kind of cultural or religious customs take place during Songkran?

“There are a lot of important religious customs that take place. The majority of Thai people are Buddhist, and the New Year is seen as a time of renewal. They pour scented water on the little Buddha statues that are located all over Thailand as a symbol of cleansing oneself from sin. Thai people will also bring sand to the Buddhist temples and essentially build very intricate sand castles inside the temples. There is a reason behind this: they believe that when you visit the temple, you take a little dirt from the temple with you on your shoes when you leave. During the New Year, you essentially bring that dirt back so that you can replenish the dirt floor of the temple and be cleansed from that sin of ‘stealing.’ Many people will participate in good deeds such as going to the temple, feeding the monks, feeding fish, or praying at Buddhist statues in order to receive blessings.”

Are there rules for the celebration?

“Songkran can be a little dangerous because of the lack of rules. Just be careful when driving. There are a lot of officers policing the roads during Songkran to prevent drunk driving, but that doesn’t prevent the hundreds of accidents that occur during the week. That being said, if you’re careful not to drive at night, you should be fine. Also, sometimes you won’t be allowed into certain Songkran areas if you are dressed too immodestly.”

What are some tips that you would give someone going to Songkran?

“Get a plastic bag for your phone and wallet, even if you aren’t planning on going to any water fights. You never know when you’ll get splashed. Everyone and everywhere is fair game. Some places will make you pay money to refill your water guns, but there are a lot of places that don’t, so don’t fall into the ‘tourist trap’ if you don’t have to. Look up the area you are planning on visiting before going.” 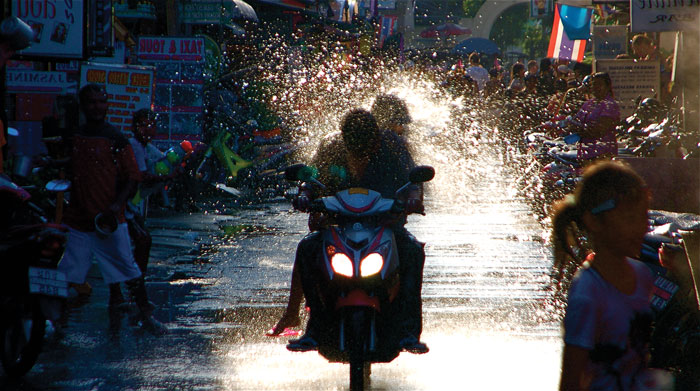 Festival goers being splashed on the back of a motorcycle. CC BY 2.0 (Richard Shaw; flipped)

Why do you love Songkran?

“I love seeing people with their families. Songkran is a time to be with your family and pay your respects to them. It’s such a happy time. It adds so much spice to your life when you’re walking down the street and all of a sudden someone throws a bucket of water on you. It’s like the water gun fights we had as kids. So many laughs, so many memories, so many soaking wet pairs of jeans.”

So what’s stopping you from participating in the biggest water fight of your life? Next time Songkran rolls around, pack your bags, grab some water-proof pouches, and head to Thailand for an opportunity to be a part of the fun and culture of the Thai New Year.