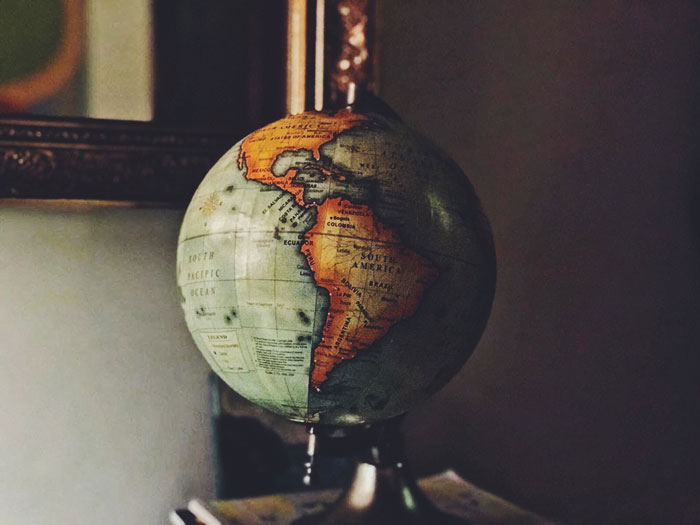 Though the smallest of the three South American countries to boast the equator, Ecuador is arguably the most enthusiastic. It would be a shame to miss visiting the equator in the country named after it, but finding your way to the right place is more complicated than you’d think.

The equator is an imaginary line that divides the earth equally between the northern and southern hemispheres. This makes it equidistant from the North and South Poles, placing it at a latitude of zero degrees. However, because of earth’s tilted rotation, the precise location of the equator actually drifts about 30 feet over the course of each year.

For some, the imprecision of the line takes away the magic, but there’s more to visiting the equator than finding the line!

Just getting to a place where you can stand near the equator is a feat. Of its 24,901-mile stretch, only 21% of the equator crosses land.

Ecuador boasts two special landmarks, both of which are volcanoes. The Cayambe volcano is the only place along the equator where there’s snow year-round. Volcán Chimborazo (the sixteenth highest peak in the world) is further from the earth’s core than the top of Mount Everest because the earth bulges around its middle.

The earth’s belly may make you feel better about your own. The bulge makes for a gravitational difference that combines with centrifugal forces to make you weigh less at the equator—even if it’s only a 0.5% difference.

For any visitor coming from the northern hemisphere, crossing the equatorial line means a change in celestial views: the stars appear differently. For example, the Southern Cross is an iconic constellation seen only in the southern hemisphere’s skies.

The daytime sky is different too. Each day is nearly the same length throughout the whole year, with daylight lasting just fourteen minutes longer than nighttime. The consistency of sunlight means it’s always summertime, though there is a wet and a dry season.

If you’re afraid of your shadow, the equator is the place to go. With the shortest sunrises and sunsets of anywhere on the world, long shadows are short-lived. During the equinoxes in March and September, the sun’s rays are so direct that at noon there aren’t any shadows at all.

Each site that marks the equator offers a different experience, so choose the one that will meet your equatorial expectations. 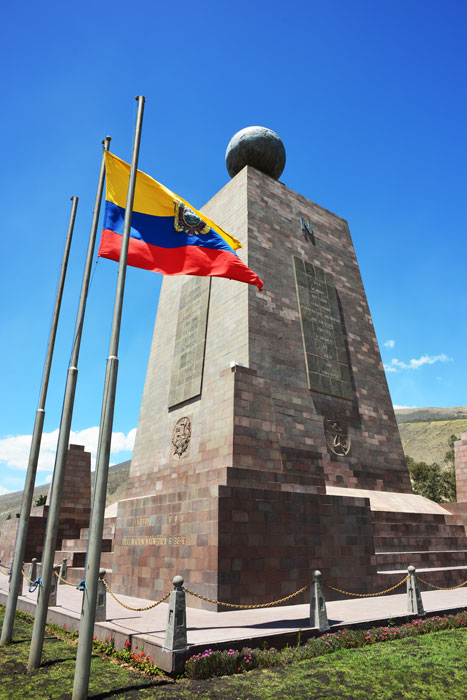 The monument at Mitad del Mundo. (Photo by Herbert Eisengruber)

The most popular equator destination has a long history. Only fifteen miles north of Quito, it sits at the point determined to be zero degrees latitude by the First Geodesic Mission. This French-led expedition, dedicated to accurately measuring the planet, arrived in the Spanish territory of Quito in 1736 to mark the equatorial line. The original monument, constructed to celebrate the bicentennial of this discovery, was moved south to the Calicalí town square so it could be replaced by a bigger version.

Built in 1979, the nearly 100-foot-tall monument is crowned with a giant metal globe that’s fifteen feet wide and weighs five tons. Surrounding the main monument are smaller tributes to scientists who contributed to the identification of the equator. A yellow painted stripe, representing the equatorial line, bisects the monument from east to west.

The entire complex caters to the 600,000 tourists drawn to the equator each year. Gardens, museums, restaurants, and stalls selling memorabilia surround the monument. It costs $2 to enter the complex; the combo ticket, which costs $5, gives you access to the top of the monument for an expansive view and entrance to the museum. This ethnographic museum displays artifacts, photos, and placards to teach visitors about various indigenous societies from all over Ecuador.

Considering this particular location was calculated 282 years ago, it’s admirable that the French measurement is only about 800 feet off. This place is perfect for taking impressive pictures if you don’t mind the touristy atmosphere.

A rival equator line is within walking distance of the ostentatious Mitad del Mundo. Follow the sign for the “Inti Ñan Solar Museum” to a humble dirt trail which will lead you up a ravine and across a small bridge to get to the open-air Museo de Sitio Intiñan. Intiñan is Quechuan (a local indigenous language) for “Path of the Sun.” 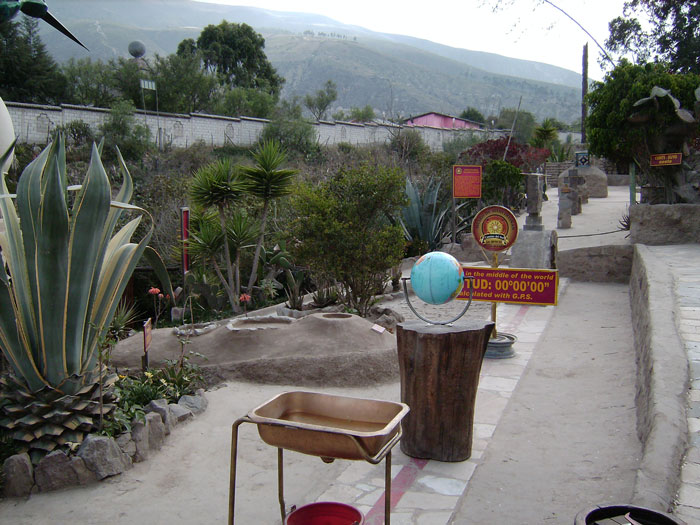 After paying the $4 entrance fee, visitors are grouped together for an hour-long tour. The museum describes the indigenous societies of the four main regions of Ecuador: the coast, the Andes, the Amazon, and the Galapagos Islands. Culture, technology, and cosmography are taught through the totem poles, the reconstructed dwellings, and the cultural artifacts encountered along paths lined with native fauna. From a scaled model of the Galapagos Islands to a live performance of native Ecuadorian dance, there’s plenty to see. However, rather than just hearing about hunting with darts and blowguns, you can wear a traditional feathered hat and try to use them yourself!

The finale is, of course, the equator. This equator site is adorned with a sundial, a spinning globe, and markers along the painted red line that indicate equinoxes, solstices, and agricultural seasons. Here you participate in activities such as balancing eggs (you get a certificate if you succeed!), testing your own balance, and watching water spin in different directions. Though scientifically questionable, these activities are undeniably fun.

The sign on the equator boasts that it was calculated using GPS, but because it is a similar system to those used in cars rather than military grade technology, it’s still not accurate. Nevertheless, the heart of Intiñan is honoring the equatorial-dwelling people, not arguing accuracy. If you want a quirky, interactive, and informative experience at the equator, choose this museum.

The most accurate equator monument is the Quitsato Sundial, an hour and a half drive northeast of Quito. Built in 2006, this marker combines astronomy and archaeology. In the indigenous Tsáchilan language, quitsato means “center of the world.” The Quitsato Project, a non-profit, hopes to tie the equatorial identity of Ecuador to the ancient cultures that understood celestial movements in relation to the equator. 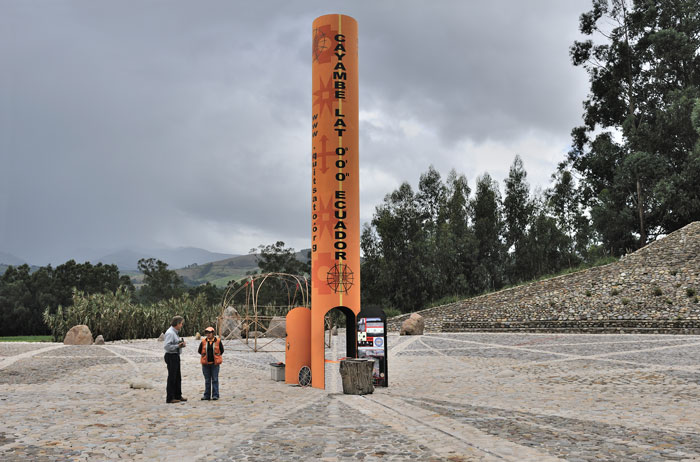 The Quitsato Sundial combines astrology and archaeology. (Photo by Cayambe)

Cristóbal Cobo, the Quitsato Project’s founder, is a self-taught astronomer, anthropologist, and geographer from Quito who made use of his pastime of hang-gliding in the mountains. Combining GPS and computer-imaging technology, he tracked the line of the equator throughout the region and mapped out the surrounding indigenous constructions. He discovered that Catequilla, an archeological site on the equator, is the center of thirteen constructions aligned with geographical and celestial lines. Cobo believes these sites were observatories from which ancient peoples charted the stars and the movement of the sun.

The Quitsato Sundial was built to share the astronomical knowledge of the ancients. Its mosaic of light and dark pebbles forms a geometric, eight-pointed star design. The lines artistically represent celestial mechanics: solstices, equinoxes, cardinal directions, the tilt of the earth, and the path of the sun. It also serves as a clock: hours and months can be read in the shadow cast by the central pillar. Community members volunteer as tour guides to give fifteen-minute presentations explaining the sundial’s meaning to visitors. If you don’t catch a tour guide or just want to learn more, check out the small museum, Museo Cultura Solar, next to the sundial.

While it may seem purely scientific, this site also invites you to look at the world through the eyes of the first equator experts. According to the brochure, “The Equatorial Line is not only an imaginary line, it’s much more than this; it’s a profound sense of being. The Equator is the balance line of equilibrium and is the line that joins to the two hemispheres . . . We appeal to a conscience of balance, union and reciprocity.”

Lacking gift shops and crowds, the Quitsato Sundial offers a non-touristy atmosphere. It’s also the only man-made object on the equator that can be seen from space, which is fitting for a site dedicated to the workings of the celestial sphere.

There is no wrong decision when it comes to visiting the equator in Ecuador. If you’re seeking a special souvenir to memorialize the trip, Mitad del Mundo will give you the best range of options. If you’re looking to make fun memories with your traveling companions, Museo de Sitio Intiñan is the most interactive and entertaining experience. If you want to stand on the most accurate equator marking and learn how it aligns with the movement of the planets, visit the Quitsato Sundial.

So the only question is, which equator would you prefer?