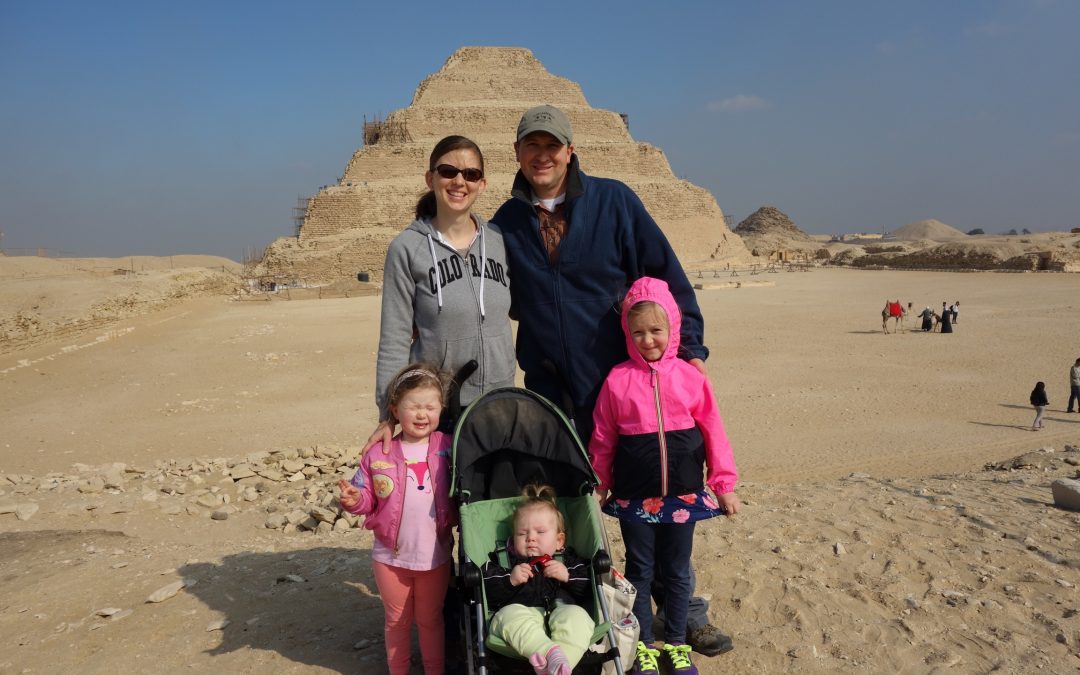 Sophia is only seven years old, yet, in her short life, she has already visited 27 countries. Sophia and her sisters Lexi (4 years old) and Savannah (1 year old) have traveled all across the world, even in the short span of time since Savannah was born: from Slovenia to Egypt, Lebanon to Portugal, Greece to Brazil. But, of course, they aren’t traveling alone.

These three sisters’ parents, Ryan and Ashleigh, were bitten by the travel bug long before the birth of their girls and have sought to make traveling to foreign countries an integral component of their family culture. But why? These parents readily admit it’s hard to find bathrooms that are functional for little kids, enjoy the sights when one child is determined to irk the other, and pack much sightseeing into one day due to their little ones’ limited endurance. So why would parents endure the thorns of traveling with little children just to see some pretty sights and eat some tasty food? Well, for Ryan and Ashleigh, the catalyst to travel is not simply finding exquisite cuisine and stunning natural beauty abroad; travel has influenced and shaped their very worldview in a profound way, and they hope it can do the same for their daughters—a desire that makes all the pain worth it.

“I feel much more connected to the world, more specifically to the people,” Ashleigh said. “I love having firsthand experience of the goodness of people around the world. I also love seeing that no matter where you go, people are all the same: we are all trying to provide for our families.” Ryan fell in love with traveling because it “challenged [his] assumptions and beliefs” about history, politics, culture, and religion. Regarding religion, he said, “My own faith has been greatly enriched by those whose practices and beliefs may appear—at first glance—to be so very different, but I have learned that, in reality, all faith traditions are pointed in the same direction.”

The lessons learned through years of travel have been so meaningful and instructive that Ryan and Ashleigh have made it a priority to show the world to their young girls, hoping that the girls, too, will one day cherish the world’s rich diversity. “Even though people may look, speak, and act differently from us, the world is full of wonderful people,” Ryan said. “There are bad apples in every country. The reality is that most people are good. The reality is that most people just want the same things as us: a job to pay the bills, time to spend with their family, and a roof over their head. We are learning together that our similarities outnumber our differences.”

However, it requires work to create wonderful learning experiences about the world and the peoples that populate it. This family’s travel preparations go beyond merely consulting the first travel guidebook they come across—they do their homework. First, Ryan and Ashleigh select their destinations very carefully, choosing to spend their time and money on “travel that will teach [them] something.” Ryan said, “We look for places that have a rich culture and history or outstanding natural beauty. . . . We also—when possible—try to time our trips to coincide with important cultural or religious events in the country we will be visiting.”

Once a location is decided on, the family learns together about the country’s culture, history, political situation, and religion, watching movies and documentaries and reading books. They feel this research process has been particularly rewarding. The pre-vacation study makes all they see at the destination “come alive.” “On our trip to Greece, for example,” said Ashleigh, “the girls studied and read a lot about Greek mythology and history and were particularly geeked out to see references to all these stories at historic sites and museums.”

The excitement and uniqueness of each trip lead the girls to be curious and ask questions. “Our fondest memories are when what we are seeing sparks questions from the girls. We have had some interesting discussions about poverty, religion, and other topics that really matter.” These moments have occurred while interacting with locals, visiting mosques throughout the Middle East, participating in the Holy Week services in Greece, and witnessing cremations at Kathmandu’s Pashupatinath Hindu temple. Being physically present for these interactions, Ryan and Ashleigh believe, inspires the girls to ask questions that wouldn’t come up otherwise.

One of Ryan and Ashleigh’s most memorable moments happened when Sophia was still their only child. One night at their hotel in Nepal, they ran into a family from India that had a daughter about the same age as Sophia. The two little ones started to play, chasing one another while their parents chatted. The girls couldn’t understand each other, but it didn’t matter. Before the families said their goodbyes and went their own ways, the other little girl gave Sophia a big hug and a little gift—a bracelet. Through this experience and many others, Ryan and Ashleigh have discovered that traveling with children makes it much easier to connect with locals and other families.

But the children are still young, and Ryan and Ashleigh are under no illusion that every place they visit will profoundly influence their girls or will even be remembered. When asked whether they like travel or not, Sophia (7) responded, “Yes! I like going to hotels and eating desserts,” and Lexi (4) replied, “I like watching movies on the plane!” Kids are kids. Ultimately, they are often more thrilled by sleeping in a hotel or by having free reign over the television than they are by learning about the subtleties of culture, religion, or history. And of course sometimes they are just too young to understand. For example, when visiting the nude statue David by Michelangelo, Ryan was awed by the inspiring, almost reverent setting of the statue, but the only impression Lexi took away from the famed sculpture was “That is a really big bum!”—an understandable reaction for a 4-year-old witnessing the 17-foot statue.

Teaching young children is difficult, and Ryan and Ashleigh don’t claim to continually have poignant, deep, philosophical discussions with their girls. Ryan said, “The fact of the matter is that they just want to find some sorbet and they are happy! That said, we have tried to put together our trips in a way that will inspire something in the girls that will bear fruit later down the line, helping them to get curious and ask questions. Given their age, we are shooting for just a couple gems, or learning moments, each trip.” So while one trip might not result in a dramatic, immediate change in their daughters’ natures, Ryan and Ashleigh believe that “traveling will over time be etched in their soul. It becomes part of them.” Ryan hopes that “because of their experiences, they will hopefully always be curious about the world around them and want to see and learn more about it.”

For this family, the purpose of travel exceeds the opportunity to lie by the hotel’s pool or guiltlessly break a New Year’s resolution to diet; instead, travel is an educational opportunity, a soul-forming and worldview-changing experience. It is something to invest in, just like any kind of education; it is something Ryan and Ashleigh believe will pay dividends down the road in how their girls interact with and view people vastly different from them. They have discovered that these trips’ benefits long outlive the moment of actually visiting a particular foreign country. The experiences live on. The family continues to reminisce about past trips, viewing pictures and retelling funny stories. Ryan said the memories act as triggers, sparking more rounds of questions about the peoples and cultures from their trips. Ryan and Ashleigh hope that, down the road, these memories will help their girls make sense of the world.

But no matter what happens later in life for Sophia, Lexi, and Savannah, they are reaping some of the benefits of travel now. “Travel also brings us together. Many of our best memories, for good or bad, occurred while traveling,” Ashleigh said. So, with all the pros and cons considered, do Ryan and Ashleigh believe the benefits outweigh the difficulties of having traveled with their small children to 27 countries?