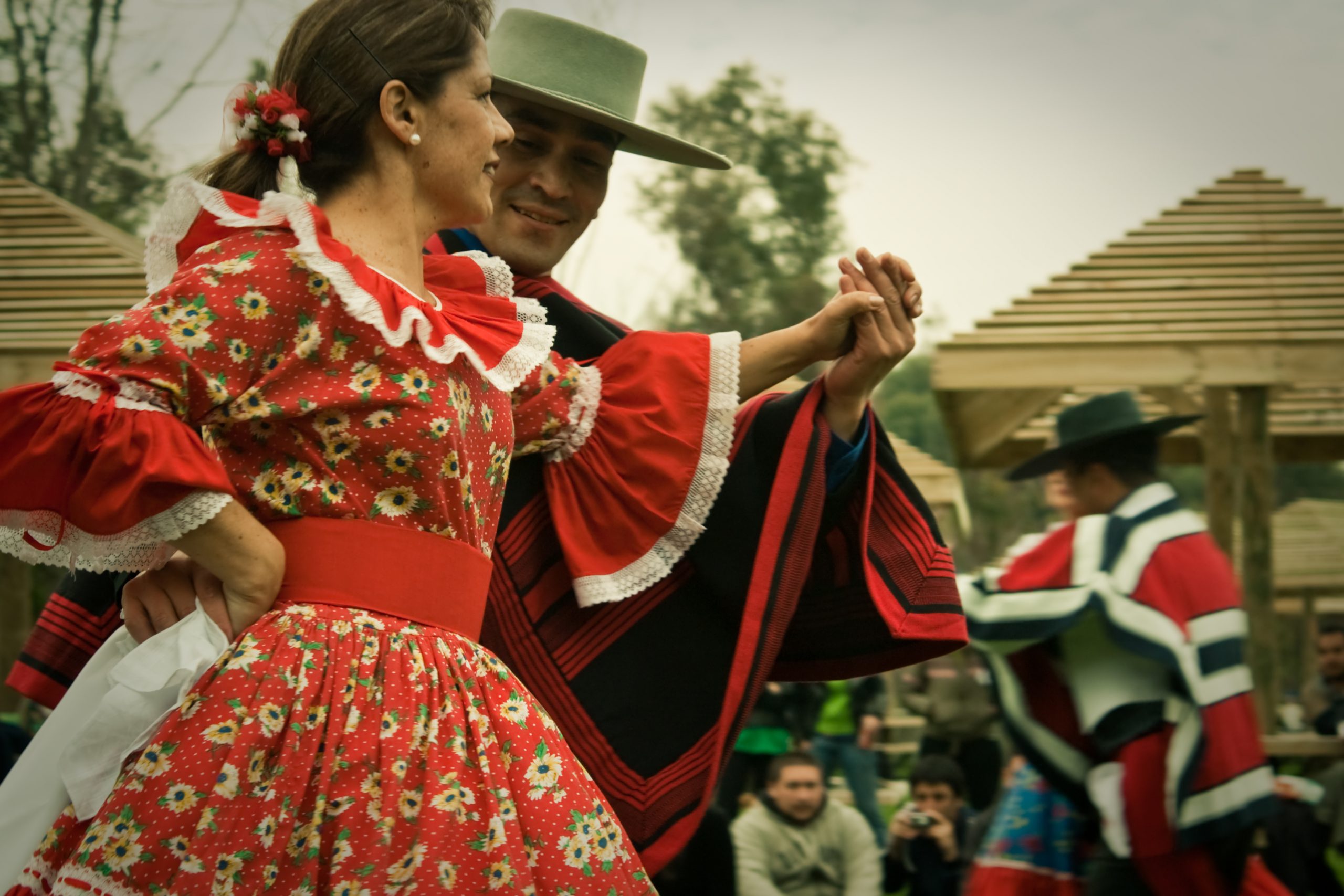 On my first day in Chile, colorful leaves were falling in May, and I couldn’t understand some of the signs and street vendors. I was visiting with my dance team, but I felt strange walking into a local church dance when I didn’t quite feel like part of the community. The event began with the performance of a traditional dance, and I looked on blankly, unfamiliar with the music and movement.

Unexpectedly, an aging woman in a bright shawl took me by the arm and led me to a partner. She and her daughter began teaching me and my team members how to do the cueca, the traditional dance they’d just been performing. I mimicked her movements, winding around my partner to an energetic rhythm. Little did I know my new friends weren’t just sharing a dance with me: they were sharing their culture and history too.

The cueca began as a style of music in the 1800s that featured guitars and tambourines. Later, a flirtacious dance developed to the music and became popular between the cattle-ranching huasos and their sweethearts. In the dance, each man and woman waves a handkerchief high as they lock eyes and dance a set pattern of figures: a half moon, a vuelta (turn), a brush, stomps, another vuelta. The lady, in a colorful, full-skirted dress and apron, waves her handkerchief tauntingly as she performs rhythmic footwork. Dressed as a huaso—spurs and all—the man executes heavy stomps and high-kneed jumps.

The cueca mimics the courtship rituals of roosters and hens; however, even though the dance is about pursuit, the dancers barely touch. The dance represents a conquista, or conquest—a man’s attempt to gain a woman’s affection.

Not every dance is the same, however. In northern Chile, dancers in Santiago perform the cueca nortiña; in the cooler, forest-covered south, rural communities gather to dance the cueca chilota. Though they are the same in their figure pattern, the dances of each area have different styles of musicality, dress, and technique. There are other less common styles as well, such as the sophisticated urbana, bold brava, and graceful corralera. No matter the style, each dance ends with the couple’s coming together or linking arms to show that the conquest has finally been made.

During the 1973–90 regime of Chilean dictator Augusto Pinochet, the cueca was used in patriotic parades and other propaganda as a tool of the dictatorship. Following the horrors of the regime, the dance became a symbol of sorrow. To protest the government, at whose hands hundreds of men “disappeared,” women danced the cueca alone, sometimes without music. Rather than showcasing the woman, the cueca sola highlighted the absence of a brother, son, or lover. Though Pinochet lost power in 1998, some women continue to dance the cueca alone, not out of protest but out of remembrance.

The cueca, rich in cultural and historical meaning, can be found all over Chile; it’s as common as the Macarena or the YMCA in the United States. When I was in Chile, my friends had only to teach me the dance to make me feel welcome. Everywhere I went in the country after that, I felt a little less like a stranger and a little more like a local. To know the cueca is to know the unspoken language of Chile.

My Chilean friends recognized the dance’s significance too; they didn’t hesitate to share such a precious element of their heritage with me. Later, I ran into the woman and her daughter who had taught me the cueca, and they surprised me with my own lacy cueca handkerchief. These women, along with many other men and women I met during my visit, brought to life these words from a famous Chilean folk song: “Y verás como quieren en Chile al amigo cuando es forastero”—or, “In Chile, you’ll see how well they treat friends from abroad.”