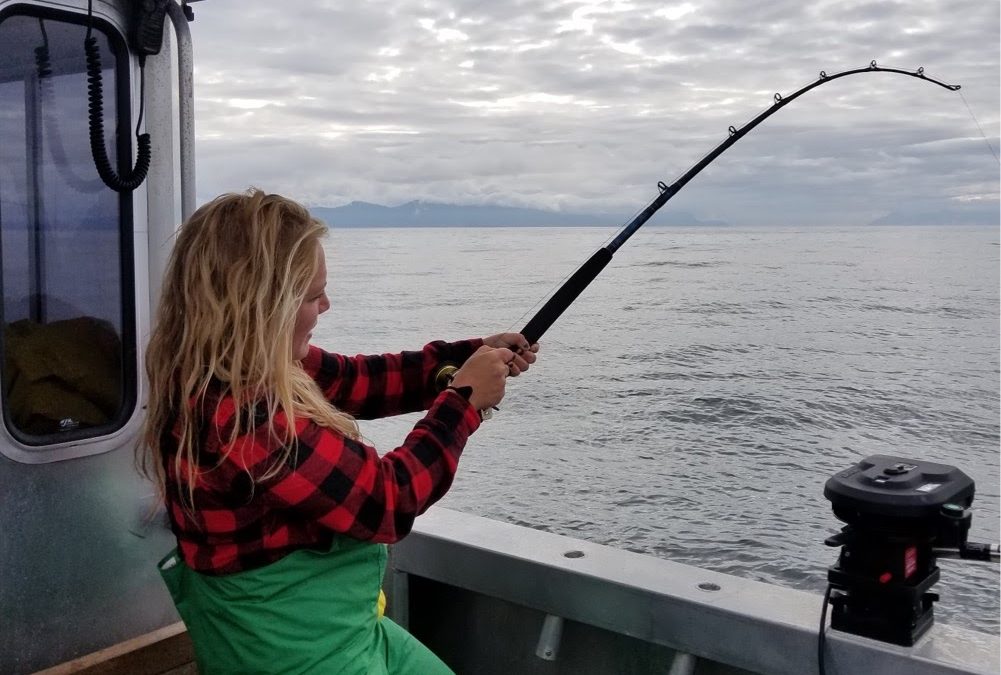 An Alaskan fishing trip is a vacation that both avid anglers and novices can enjoy.

The view out my window on Alaskan Airlines flight 71saturated my eyes with more green than they had probably absorbed in their prior 22 years put together. My uneasy anticipation for a week at a remote Alaskan fishing lodge quickly evolved into kid-at-Christmastime excitement.

I was venturing off with two professors and six other students to Pybus Point Lodge on Admiralty Island, a spot off the coast of Alaska that is home to more bears than people. We were on our way there to catch fish for our research. I had no idea what to expect, but with the unbelievable scenery I was already catching glimpses of, I was elated to be there no matter what I’d be doing.

My travel companions and I spent the night in Juneau, and early the next morning, a float plane carried us low over an endless intermingling of forest and ocean. We spent the hour with foreheads glued to glass, trying to commit each wave and branch and wing to memory and eagerlyscanning grassy clearings for the russet fur of a brown bear.

At the end of our journey, the plane landed in secluded Pybus Bay with the grace of a dandelion seed. We puttered over to the dock, where the dockhands swarmed to help us off the plane and replace us with the previous week’s travelers. The door flipped open, my Keds hit the weathered dock, and I was in love. The ocean’s signature cool, briny aroma rushed into my nose and mouth and wide-open eyes, reminding me of the sultry beaches of Northern California and Oregon, but somehow more isolated—like this air was the ocean’s secret reserve saved for hard-to-reach locales. Other than the lodge, all we could see was sky, forest, ocean, and bald eagles.

As we progressed up the dock, last week’s visitors greeted us warmly, comparing my size to that of the fish they had just caught. The staff guided us up to the dining hall while the departing visitors waved goodbye out the windows we had just become so well acquainted with. Our captains wasted no time: after a quick briefing on the lodge rules and our schedule for the week, we wrestled into our fishing bibs, jackets, and boots, and headed out on the boats.

Dots of rain and ocean water hit the boat’s windows and made watery paths through which I frequently caught glimpses of a humpback’s tail or dorsal fin. We passed island after island of towering conifers until our captain, led by his sonar fish finder, stopped the boat. He led us out of the cabin, handed us each an enormous fishing rod with a rubbery lure, positioned us around the boat, and told us to drop our lines.

We quickly learned this was no typical fishing trip where you spend the day waiting for your floater to bob under the water only to realize you caught a twig. The first of us caught his halibut in just minutes. It took me a little longer to figure out the correct bobbing technique, but soon my line went taut and I felt a tug through the rod. I quickly yanked the rod back to set the hook and started reeling. I hadn’t expected catching a 25-pound fish to be easy, but I had absolutely no idea how exhausting it is to fight an angry halibut through 300 feet of ocean.

It took what felt like hours to my underused biceps to reel in all that line, but at long last I saw the dark green scales of a halibut. I used my last energy to call out to the captain to scoop my catch out of the water before I flopped against the cabin, my arms hanging beside me limper than the rubber lure that still dangled from my line. I was exhausted, but I don’t think I’ve ever felt quite as accomplished as I did in that moment.

Fortunately for my fatigued muscles, the limit per person for halibut is one per day. Once everyone caught theirs, we moved on to rockfish, and some days we caught salmon too.

Every day went basically the same as the first, except we had a lot more time to fish because we started the day already at the lodge. After a full day of fishing, we would return to the docks where the captains filleted and vacuum sealed our fish for us to take home.

We had the rest of the evening until dinner to relax and explore. Some of the lodge guests preferred to take a skiff out to do more fishing (you have to stay close to the lodge, but you can catch as many halibut as big as you want if you’re not with a captain). My muscles were done with fishing rods by the end of the day, so I preferred to take a kayak or paddleboard around the bay and enjoy the serenity that comes with being surrounded by still water and gently swaying trees.

One thing Pybus Point Lodge does better than anyone else is serve amazing recipes using local resources. We enjoyed warm huckleberry muffins and pancakes for breakfast, an unbelievably delicious halibut spread on sandwiches for lunch, and unbeatable almond-crusted rockfish for dinner. To top it all off, on our last night, we had crab and shrimp that we had caught with the crew only hours before.

After dinner each night, as the sun slowly made its way toward the horizon for its six-hour rest, my lodge mates and I would gather in the hot tub or around the fire, hot tea in hand, to discuss the day’s events and get to know each other better. It was a much-needed break, both for our aching muscles and our ever-busy minds. There’s nothing like the Alaskan wilderness to bring you to the present and remind you how vast the world is.

As we soared in another float plane over the snow-peaked mountains and endless ocean back to Juneau, I spent the hour jealously trying to absorb every inch of Alaskan water and soil, irritated with my eyes for needing to blink, and wondering how I managed to end a vacation feeling both accomplished and refreshed. I would never have guessed I’d enjoy a fishing trip so much, but by the time our plane landed under the overcast sky in the stretch of ocean that was Juneau’s seaplane airport, I was already planning my trip back.

I mean, what other vacation destination sends you home with 50 pounds of fish?

Ana Kokkonen takes in the view of Pybus Bay from a kayak. (Haley Brown)