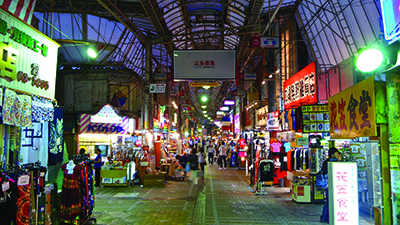 After the war, Kokusai Dori—also called “Miracle Street”—quickly became a   center of trade, economy, and prosperity that continues to the present day.

In the cold, deadly conditions of total war, enemy assets like bridges, roads, and airports must be cut down to ensure victory. The Battle of Okinawa was one of the bloodiest in all of World War II. The total number of casualties over two-and-a-half months exceeded the number of combined casualties in the Hiroshima and Nagasaki bombings. Over 90% of the buildings were destroyed. Indeed, it was the terrible carnage in Okinawa and its surrounding islands that prompted American wartime  leadership to consider an alternative to a traditional invasion of mainland Japan.

Fast-forward to the modern day. Okinawa is considered in many ways to be to Japan what Hawaii is to the United States: an isolated island chain with a rich culture, its own unique pride and identity, and a bustling tourism economy. No street exemplifies this better than Kokusai Dori in downtown Naha, the capital city of Okinawa. The name literally translates to “International Street.” Initially it was named for the “Ernie Pyle International Theater” that was built shortly after the end of the war (and the continuation of American occupation), but now it characterizes the international crowd that is drawn to the incredible wealth of food, souvenirs, and cultural events that all can be found on Kokusai Dori. Kokusai Dori is also called “Miracle Street,” as after the war it quickly became a center of trade, economy, and prosperity that continues to the present day.

Every fall, Naha’s tug-of-war festival kicks off with a grand parade that begins on Kokusai Dori. Lion dances, fan dances, musical performances, and martial arts exhibitions put a smorgasbord of Okinawan art and culture on full display. The performances move on to the adjoining Route 58 where the centerpiece of the festival awaits: the Tsunahiki (tug-of-war) rope. The Guinness World Record–holding rope, which is remade from scratch every year, is over 600 feet long and weighs 43 tons, enabling costumed performers to dance upon its considerable girth.

The massive rope is nearly five feet in diameter, but hundreds of smaller diameter ropes branch off of it to enable around 15 thousand people to participate in the epic east-side vs. west-side competition. The rope is in two separate pieces, which at the start of the festival are brought together and then joined by a kanuchibou, a large wooden pole that locks the two rope loops in place. There is a 30-minute time limit to the pull, which may be broken if one side pulls the other at least 50 feet from the starting position. The event draws over 200 thousand people each year. After the tug of war is complete, the winning side traditionally climbs on top of the rope to dance and shout in their victory, but all are encouraged to hack off a piece of the rope to take home, commemorating their participation in an event intended as a prayer for good health and prosperity.

Along Kokusai Dori, one may find a variety of delicious food, from Okinawan soba noodles, to yakiniku, to, yes, even Burger King—and everything in between. Indeed, one of the most famous examples of Okinawan fast food is an invention called “Taco Rice,” which typically consists of taco-seasoned beef served over white rice with vegetables. The food is a result of mixing American-style Tex-Mex cuisine and the ubiquitous Japanese white rice.

For dessert, there is the Blue Seal ice cream shop, which has all the traditional flavors and several Okinawan specialties: Ryukyu Royal Milk Tea, Ube (an Okinawan purple yam), refreshing Shiiquasa (an Okinawan citrus), and Blue Wave, a delicious blend of blue soda ice cream with pineapple and vanilla.

Overlooking Kokusai Dori is the magnificent Shuri Jo. Originally destroyed in the Battle of Okinawa, the red-painted Ryukyuan palatial fortress was reconstructed by memory and historical records starting in 1992. It is the image of the rare two thousand–yen note, which printed in the year 2000 and has achieved a rarity similar to that of the American two-dollar bill. The castle is designated as a UNESCO World Heritage Site and serves as a grand cultural symbol. Once a center of politics and commerce, then a Japanese military barracks, Shuri Castle is again an international treasure.

It is hard to imagine that only seven decades ago, Naha was the site of destruction, one of the last bastions of Japanese entrenchment at the end of World War II. Shuri Castle now overlooks the “International Road,” a cultural center for people of all nations and cultures. Kokusai Dori will always be a place of dancing, eating, and celebrating prosperity through festivals.