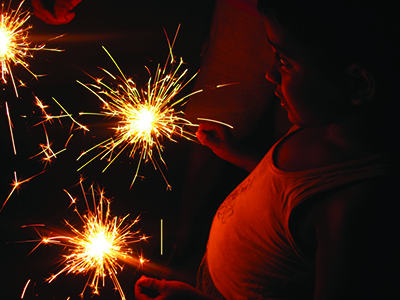 Diwali is a festival of lights. They use the lights to decorate, which symbolizes goodness overcoming evil. (Khokarahman)

Every generation has its take on traditions. And it’s no different for the tradition of Diwali, the Hindu festival of lights, a five-day festival celebrated near the end of each year. It’s a time of worship, family, and celebration.

Sukanta Nanda was born in India and emigrated to the United States in 1995 with his family, including a millennial-era son. He said that his children see Diwali as a party, a time to dress up and go dancing.

But Diwali was about four main things when Sukanta grew up in India: ancestors, worship, fireworks, and food. First, it was about paying respect to ancestors. By revering them, Sukanta said it’s as if he were saying, “You made our lives great. You brought us to this world, so this way we are conveying gratitude.”

Diwali is also a religious holiday in which Hindus perform puja (the act of worship). The main god worshipped during this time is Lakshmi, the goddess of wealth. During this festival week, people also set off fireworks to celebrate the light. And finally, Sukanta said that Diwali is about “good, great food.”

Sukanta’s experience with Diwali is a little different in America because of restrictions regarding fireworks where he lives. And to add to that, not everyone around him is celebrating Diwali, so it seems like more of an individual holiday. But to Sukanta’s children, and many other millennials, some of the meaning behind Diwali is less religious and more festive.

Shaina Verma is an American-born Indian millennial who grew up in India but spent the last seven to eight years living in the United Kingdom and the United States. “It’s an excuse to throw a big party,” she said. To her, Diwali isn’t just about spending time with family—it’s about partying. When she lived in India, she would spend Diwali with her family, but at night, she went out to party with her friends.

And even though the parties occupy most of Shaina’s memories, she also vaguely remembers participating in puja and taking blessings to her elders. To her parents, Diwali is less about the partying and more about gathering the family together.

Now, Shaina doesn’t celebrate Diwali as often because she hasn’t been back to India during Diwali for quite some time, but she definitely remembers the parties.

Another important part of Diwali is spending time with family. Deesha Tank was born in India but moved to the United States when she was two years old. She celebrates Diwali with her family, but sees Diwali as more of a tradition than something heavily religious. “Especially being an Indian in America, you just, you are passed on these traditions,” she said while she laughed. “You don’t necessarily know what they symbolize. You just do it.” So even though she can’t explain what the light symbolizes (“I don’t have a clue,” she laughed again), she still goes to temple and prays every year during Diwali. “It’s literally the one time of year that I go to chapel.”

To prepare for Diwali, Deesha’s family decorates their home with rangoli and diya. The rangoli is a colored chalk powder used to draw out designs on the ground. These designs can be shapes and symbols, or drawings. The diya is the clay pot used to hold the light. Inside the clay pot is a cotton ball soaked in ghee (vegetable oil). The soaked cotton ball is then lit on fire, creating a small light. People fill their houses and the temple with these lights to represent light overcoming darkness, good triumphing over evil. The word “Diwali” comes from Sanskrit, meaning “a row of lamps.” Deesha said that some people will even put up strings of lights during Diwali and just leave them up for Christmas.

For Deesha, Diwali is a Thanksgiving-like holiday. “It’s really about celebrating your family and just coming together.” More than a religious holiday for her, Diwali is a time that Deesha sees people in her extended family. So even though she’s not sure why she is participating in puja, to her, Diwali is a significant family occasion.

She remembers one year when all her family went to her uncle and aunt’s home in California. She remembers “copious amounts of fireworks” that “spin, and they spark, and they fly.” Her entire family on her mom’s side was there, about 180 people, all coming together to watch fireworks.

Another tradition that Deesha loves is unique to her family. When they gather together, the women sing religious songs. “I think we’re all a little worried about it because none of my cousins and my sister and I don’t know any of the songs, so we’re like, who’s going to sing it for our kids when the time comes?”

To Tara Balakrishnan, Diwali isn’t so much of a religious holiday as a cultural one. When she was growing up in Seattle, she’d go to friends’ houses for Diwali, but to her, it was just another Indian holiday. “Except it was more like fourth of July because we also would light fireworks,” she said. Her parents were more religious than she deemed herself as being, so they’d want to go to temple, but Tara says that because she no longer lives at home, she sometimes forgets about Diwali. The only thing that seems to remind her of it is that she’s part of an Indian dance group that performs for Diwali. “There are definitely people who take it more religiously and people who take it more culturally. Even as part of the Diwali celebration on [my college] campus there’s a puja.”

Tara said that when she was young, she went to a Hindu class reminiscent of Sunday School, but she eventually stopped going. To her, education took precedence in her life, as her parents often reminded her that education comes first. “I guess maybe I took that pretty seriously,” she explained. Another reason she thinks that she doesn’t celebrate Diwali is because her close friends don’t celebrate it. “Growing up in the US, you feel a little more disconnected from Indian culture.”

Tara only identifies herself as a Hindu “sort of.” Though she has a cultural connection, she isn’t as religiously tied to it. In the circle of Indian people she knows, there is “a strong subset that are religious.” But to Tara, it still seems that there are a good number of Indians who aren’t religious.

No two experiences are the same when it comes to religious celebration, but each experience makes up the whole of a religion. For some American Indian millennials, Diwali is another party. For others, it’s a time to gather with family. And to others, it’s just a festival that happens. Each of these experiences show how the meaning of Diwali changes to fit each person’s lifestyle and path. “This is the funny part about being Indian,” Deesha said. “Hinduism is such an integral part of our culture overall because a majority of Indians are Hindu.”

Diwali occurs in late October or early November. This year, it begins on October 19 and wraps up on October 23.