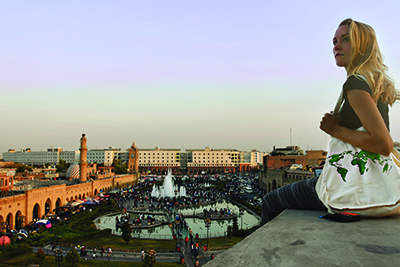 On February 2, Cassandra De Pecol entered Yemen, becoming the first documented woman to travel to every country in the world. This record-breaking journey, called Expedition 196, took her just over 18 months to complete. While she also became the youngest American to travel to every sovereign nation, as well as the fastest person by finishing in the shortest amount of time, her expedition was designed to accomplish much more.
“Expedition 196 is a mission to promote positive peace through sustainable tourism, educating the millennial generation while also positively influencing young women around the world to further their potential,” the 27-year-old said in an email.

Cassie’s passion for international travel began when she traveled to Costa Rica for her university’s global studies program. There, she had her first experiences living among locals and studying environmental and political issues in those areas.
“Going to college my first year in Costa Rica really influenced my decision to just see every country, but I had never traveled outside of the country besides Canada before then,” Cassie said.

By the time she was 21, Cassie had saved $2,000 through babysitting and lifeguarding so that she could travel to Europe with her brother Jason. After spending a month exploring Belgium, Germany, and Switzerland, Cassie decided to stick around instead of returning home.

During the next two years, she traveled to 25 countries. She couch-surfed and even slept in train stations, eating as little as possible so that she could put her money toward more experiences.

“It was here that I really traveled off the beaten path,” Cassie said. “[I] lived in eight different countries working whatever odd jobs I had to do to keep going, and really took the time to immerse myself in the way of life of those countries.”

These experiences gave her an “enormous understanding of worldwide culture and eco-conscious hospitality venues,” which only increased her fascination with travel and ecology. Sustainable tourism and peace through travel became a passion for Cassie—and a driving factor for Expedition 196.

Although she obtained sufficient funding to begin, it took constant planning and communication to maintain that funding throughout the Expedition. After seven months abroad, Cassie realized her budget was disappearing quickly. She ended up returning home a few times to contact investors and companies for sponsorship so that she could keep going.

“I expected for the trip to be extremely difficult to manage financially, but I didn’t realize just how challenging that it would be,” Cassie said. “It took an immense amount of determination and persistence and a whole lot of ‘you’ve got nothing to lose’ in order to reach out to CEOs over and over and over again until they said yes.”

With two to five days to spend in each country, Cassie maximized her time to work on two of her main projects: planting trees and collecting water samples to be tested for micro plastics. To “offset her own carbon footprint,” Cassie planted trees all along her journey. The water samples are for the non-profit organization Adventurers and Scientists for Conservation, which will research the samples to gather data about the cleanliness of waterways throughout the world.

“For me, this expedition is a matter of maximizing every single moment that I have within a given day to absorb as much as I can with the little time that I have on this earth,” Cassie said.

Another one of her priorities was to spread the word about sustainable travel and peace through tourism. Cassie addressed thousands of university students in 38 countries, promoting eco-friendly travel by focusing on criteria set forth by the Institute for Economics and Peace and the International Institute for Peace Through Tourism (IIPT).

“Together, we discuss how tourism can be a mediator between peace and conflict, and a way to further friendship among nations as well as providing humanitarian assistance,” Cassie said. “For instance, a sustainable hotel can partner with Pack for a Purpose so that guests can bring educational supplies to distribute to local schools in need where they’re vacationing, [and that] signifies cultural understanding and respect.”

Still, Cassie asserts that the most significant difference we can make in the effort toward peace is to open our hearts to people we encounter in our journeys throughout the world.
“The only way we can truly create a more peaceful world is by respecting people of all races, religions, genders, and cultural backgrounds and—if we’re feeling up to it—choosing to understand where they come from,” Cassie said. “While we’re all the same, by connecting with people who come from different backgrounds and cultures we’re able to develop a deeper understanding of overall humanity, thereby creating more of a unity among people of all nations.”

With what equates to more than a lifetime of travel experience, Cassie has truly demonstrated the value and lasting impact of traveling versus simply going on vacation. By completing what she set out to do—what she describes as her “life’s work”—Cassie is an inspiration to all who share her dream of seeing the world, showing millennials that they don’t have to wait forever to fulfill that dream.

“It is my hope that through traveling alone as an American woman, I’ve been able to respectfully introduce [people] to the safety, kindness, and the similarities of 99% of people around the world,” Cassie said. “In portraying this, I’ve had to let go of all of my fears and trust in people, trust in strangers, and trust in the unknown, and it’s proved to be a powerfully rewarding experience.”