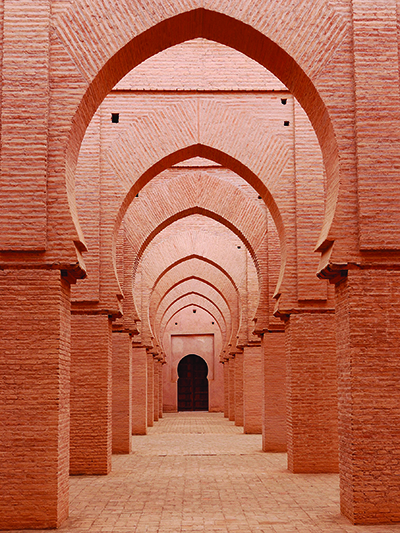 Morocco is a country shaped by influence—from the Spaniards in the north to the Saharan desert sands blowing from the east. The Moroccan people have built entire fortified cities from clay and have carved intricate designs into wood with Arabic messages thanking Allah for the beauty of creation and invention. All of these political, natural, and progressive influences have led Moroccans to construct unbelievable architecture that boldly showcases color, stability, and detail.

Among these Moroccan architectural creations are ksour, mosques, riads, and mausoleums. Each of these constructions carries its own unique set of features that distinguish it from other buildings and monuments around the world. As travelers learn more about Morocco, they can discover what sets these structures apart and find the best places to witness their beauty within the country.

Made from mud or stone, the castle-like ksar is usually found seated in a mountainside for the greatest level of protection. This fortified village was often built as a collection of attached homes surrounded by one powerful wall. Native Moroccans built most of the sand-colored cities many hundreds of years ago, but a large number of ksour can still be visited today.

See it in Ouarzazate, Morocco, at the UNESCO World Heritage Site of Ksar Aït Benhaddou.

As the centers of various religious activities, mosques are built with the utmost precision and care. Every element of a mosque—from the delicately painted ceilings, to the marvelously tiled walls and floors, to the corners of the rooms carved to look almost like lace—is constructed as praise to a higher being. While not every mosque is so ornate, many of these buildings display some of Morocco’s most incredible architectural feats.

See it in Casablanca, Morocco, at the Hassan II Mosque (open to non-Muslim visitors).

From the Arabic word meaning “garden,” a riad is a traditional Moroccan house built surrounding a courtyard. As with most Moroccan homes, riads are simple and windowless from the outside. This architectural decision is made for a few reasons, such as family privacy and monetary modesty; the blank exterior allows for both seclusion and resistance from flaunting any wealth. However, after entering through the front door, one can see the true workmanship of Moroccan artisans.

See it in Fez, Morocco, at the Karawan Riad or the many other riads throughout the city.

Built to house the tombs of prominent political and religious figures, Moroccan mausoleums reveal the people’s respect for their leaders. This respect can be seen in architectural elements such as intricately tiled arches, brightly colored dome roofs, and carved chairs for people to sit in as they read from the Quran.

See it in Rabat, Morocco, at the Mausoleum of Mohammed V.