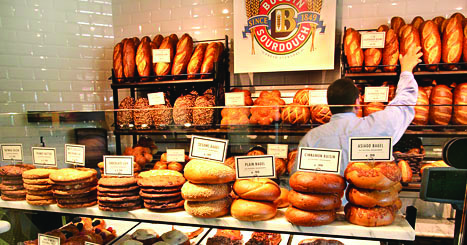 A Boudin baker stocks sourdough loaves for the day at the Fisherman’s Wharf location in San Francisco, California. (Boudin Bakery)

Boudin Bakery in San Francisco has been baking up famous sourdough bread since the Gold Rush, and tourists and locals alike line up to get a taste.

You are surrounded on all sides by loaves and loaves of freshly baked bread. The smell is almost intoxicating.

No, you’re not in heaven—you’ve just stepped into Boudin Bakery. This San Francisco gem first opened in 1849 at the height of the California Gold Rush. And the miners who lined up each morning for a loaf of Boudin Bread struck gold.

In the midst of the ever-hipper foodie paradise of San Francisco, the bakery hasn’t changed much about its look—or its recipes. Bakers saved the original sourdough in a bucket from San Fran’s Great Fire of 1906. Picture that for a moment. In all the chaos of a massive earthquake and the destructive fire that followed, these bakers knew what was most precious to them: bread. That original starter is still used in all of Boudin’s sourdough bread.

Current head baker Fernando Padilla apprenticed with the former Boudin owner and has been a part of the bakery for almost 30 years. That dedication has paid off. Bread at Boudin is perfectly crunchy on the outside and fluffy on the inside. The only thing that makes it better is pairing it with a huge bowl of clam chowder like a true San Franciscan.

A traditional recipe isn’t the only thing that keeps tourists and locals alike flocking to Boudin. The bakery is famous for creating bread in shapes like crabs, fish, teddy bears, turtles, and the iconic San Fran cable car. So yes, visitors can pick up a boring old loaf, but the special-shaped bread is where it’s at. Only the most skilled bakers can make these shapes, especially the more complex ones, and it’s a sight to see.

Boudin was also one of the first bakeries to create a demonstration bakery where tourists could see bread being made. The bakeries have huge windows so window-shoppers can watch the master bakers at work.

Boudin Bakery has several locations in San Francisco, so it’s technically a chain, but you’d never know it from the hometown feel. They even have a bakery museum at Fisherman’s Wharf for those purists wanting to connect with Boudin’s rich history.