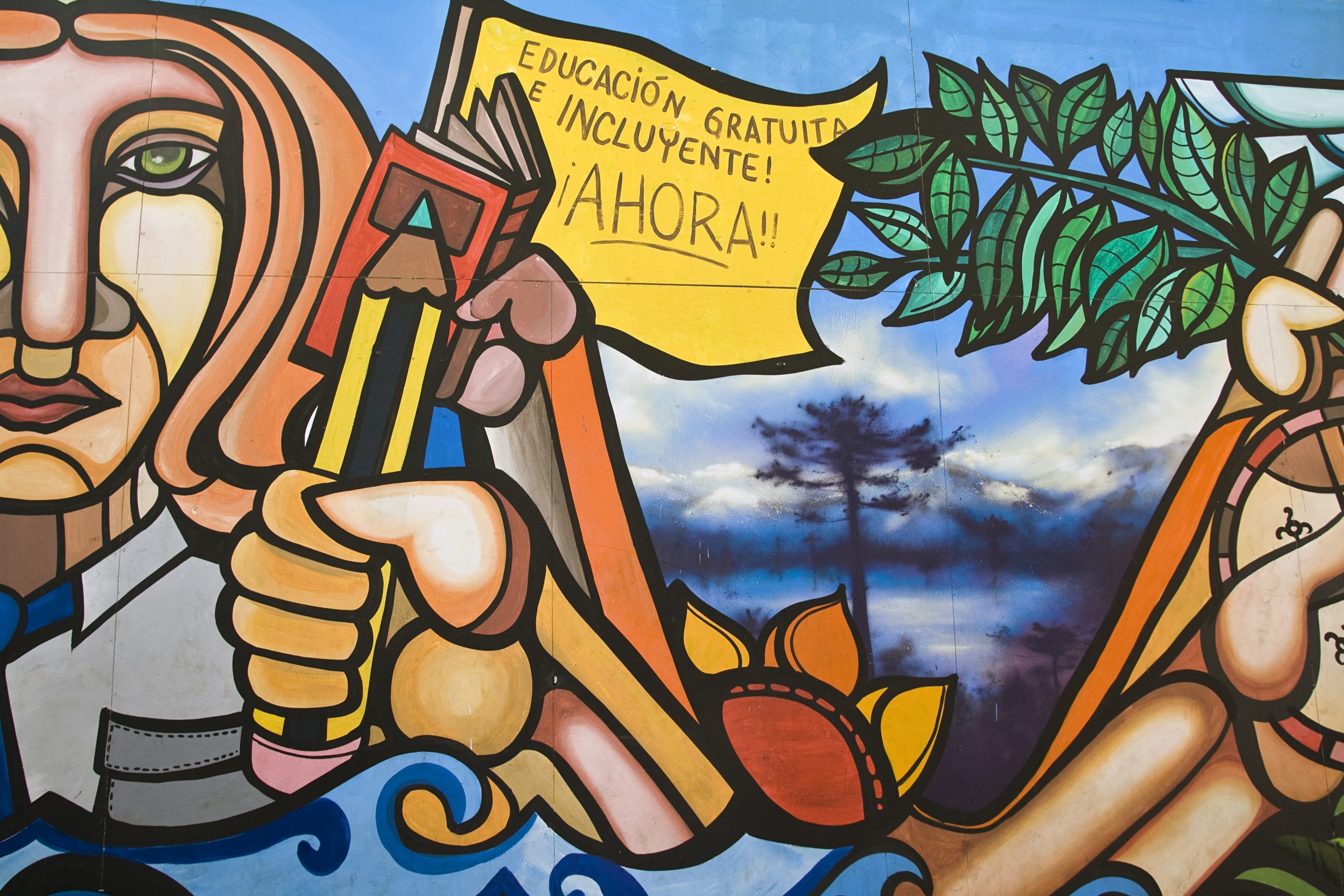 Throughout history, art has been used as a means of protest. From Milan, Italy, to Seattle, Washington, to Santiago, Chile—and countless other cities—graffiti has become a weapon to protest perceived injustices.

Aushi Walalam didn’t just discuss politics around the dinner table at night with his father—they went out together and graffitied Venezuela’s streets to make their voices heard.

For several years, Aushi’s father ran a school of political propaganda in Venezuela, where he taught youth about the art of murals, banners, and pamphlets, the most common forms of expression at the time. Aushi, his father, and his friends made ecological, political, and cultural resistance murals.

“In the small, clandestine printing presses all over South America, these youth in the darkness shouted for freedom,” Aushi said.

Today, the political street art scene isn’t all that different. Aushi and his wife, Paola Petillo, both Venezuelans, now live in Milan, Italy. “Italy is the country where I’ve seen the most graffiti in the streets and specifically in the area where I live there is a lot of graffiti with political and social connotations,” Paola said.

Where Aushi and Paola live in Milan, there is a housing problem with people living in unoccupied buildings without paying rent. Police remove them, Paola said, but the people return. She sees graffiti calling attention to and protesting the housing problem; people are still trying to have their voices be heard. But this art isn’t necessarily fixing this housing problem or a whole host of other political arguments for that matter. So is it worth it?

Growing up creating his own graffiti, Aushi believes in the power of street art. Paola isn’t sure it’s effective since she “doesn’t see that the art solves anything.”

Across the globe in Seattle, Washington, Leah Dooley has doubts as well.

Leah is a student at Seattle University. She lives in Capitol Hill, Seattle, where political street art defiantly decorates the streets. She questions the effectiveness, though, simply because so many of the people in the area share the same political beliefs. “Preaching liberal ideas in Seattle is like screaming into a vacuum,” Leah said. “Nearly everyone is far left, and nearly all of them agree.”
She frequently sees anti-Trump fliers and artwork. However, she said just because she thinks most people agree on the ideas the street art shows, she doesn’t think people should stop. “I think it’s important to spread ideas and support,” Leah said.

Often, social commentary street art in Seattle is in the form of stickers and fliers. Leah described seeing a stop sign with the word “misogyny” posted below the “stop”—so it read “STOP misogyny.” Images like this are popular to post on Instagram, feeding into the idea that most people in the area agree on politics and aren’t afraid to share things that could be considered more controversial in other areas.

Much farther south in Santiago, Chile, there is a history of large political unrest, and people’s differing views abound. For years, these viewpoints have been plastered, painted, and posted on walls in the city to boldly demonstrate agitation with the government—loud, violent stabs at the dictatorship in control of Chile.

Myriam Ruiz is currently a journalism professor at the Universidad del Desarrollo in Santiago, Chile. “(Graffiti has) been a way to express disagreement from the young people to the authorities,” Myriam said. “I was studying under the Augusto Pinochet government, and I remember those years I saw the first graffiti in Santiago.”

Myriam remembers being very impressed with the work of the Brigada Ramona Parra, a formal group of professional street artists dedicated to opposing Pinochet. Now, Myriam feels there’s not as much political protest in street art and graffiti—“It’s more a protest to the new Chilean society, more [a] social rant,” she said. “Modern graffitiers . . . are representing new generations’ ideas about classical politicians.”

Political views, graffiti styles, and artists may change over time, but it looks like political protest through art is here to stay and stick it to the man.
–Kjersten Johnson