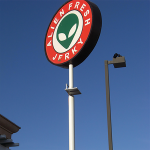 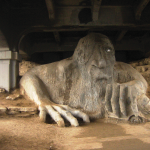 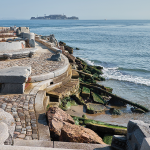 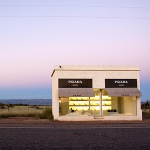 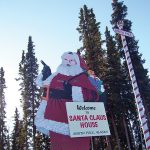 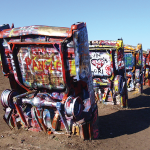 Baker, California, is a popular stop for weary travelers, and not just because it’s the halfway point between Los Angeles and Las Vegas. Alien Fresh Jerky is a shop in Baker that offers “alien jerky” for those with a taste for the supernatural. A UFO-themed hotel is also in the works to accommodate the shop’s 750,000 annual visitors.

The Fremont Troll is an 18-foot sculpture located at Troll Ave N, Seattle, WA 98103. After being commissioned by the Fremont Arts Council, Seattle artists completed the troll that sits at the north end of the Aurora bridge in 190. Every Halloween, the city hosts an event at this year-round photo op.

Want to put your ear to the world’s biggest conch shell? The Wave Organ is a series of over 20 pipes that feed into the water of the San Francisco Bay, sounding low notes with the high tide. Each pipe was engineered to play a different note, so if you’re lucky, the ocean might compose you a unique song!

This art installation in the west Texas desert town of Marfa was created in 2005 to resemble a Prada store, and it has actual Prada shoes and purses inside. Marfa is an arts hub in the middle of nowhere. It is also “famous” for the unexplained Marfa lights phenomenon.

Just 13 miles southeast of Fairbanks, Alaska, lies North Pole, Alaska. Home to the Santa Claus House, Kris Kringle Drive, and candy cane street lights, this town is everything you’d expect with such a famous name. The Santa Claus House is the go-to gift shop for all things Christmas, all throughout the year. In front of the store is a fiberglass Santa Claus statue—the largest in the world.

Along Interstate 40, just outside of the city of Amarillo in the Texas panhandle, you will find a row of bizarrely painted cars planted nose-first in the dirt. With tail fins raised to the sky, ten graffitied Cadillacs are submerged in the ground—which you are encouraged to tag with your own paint can. Fun fact: the cars are buried at an angle intended to directly copy the angle of the Great Pyramid of Giza.