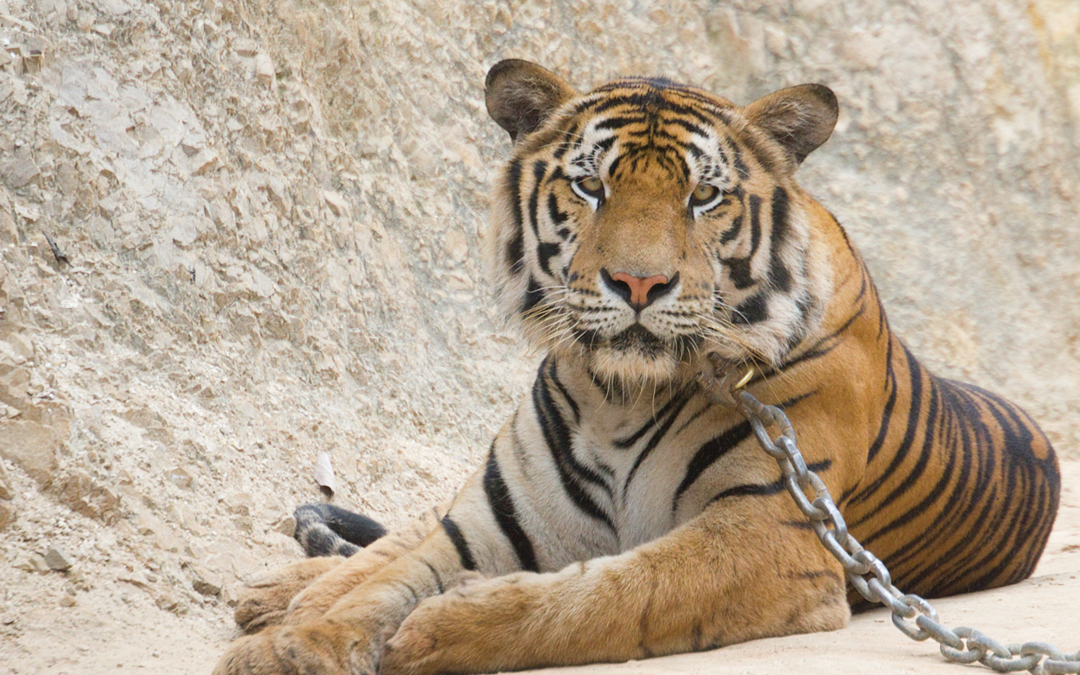 On a sultry evening in January, wildlife officials in Thailand walked through the doors of one the most popular wildlife tourist attractions in the world, the Tiger Temple, armed with tranquilizers and sedatives. This tiger park run by Buddhist monks was world famous among animal lovers and international travelers because visitors had the rare opportunity to interact with the animals.

For a fee, tourists could pet a grown tiger, feeling the short, coarse hair brush against their fingers, and listen to the gentle breathing of one of nature’s most majestic and deadly animals. Other visitors chose to spend their time in the park playing with baby tigers, holding the cubs in the nooks of their arms like a baby while bottle-feeding the newborns their breakfast of milk formula.

Tourists came to the temple because they cared and wanted to learn more about tigers in an interactive and close environment. They thought that what they paid for admission was going to help with conservation efforts, or—at the very least—to increase the tigers’ quality of life. They never would have imagined that their money was supporting animal cruelty.

For years former volunteers at the temple had expressed concerns regarding the poor treatment of the tigers, and NGOs in the area had long suspected that the temple’s management was breeding and illegally selling its tigers on the black market. When wildlife officials investigated, they were shocked by what they found. When tigers were not chained and on display for tourists, they were locked in cramped, concrete cages where they had little room to walk around. The tigers were being fed chicken instead of red meat because it was cheaper, leaving them malnourished and more susceptible to diseases. But most disturbing of all, officials found 40 dead tiger cubs in the temple’s freezer.

The temple’s monks stated that the newborn cubs’ carcasses were saved after their death to prove that the temple was not selling tiger pelts or bones (used in traditional Chinese medicine) on the black market. Local people were shocked by what was happening at the temple, and local and international news agencies alike wrote stories investigating the temple’s animal cruelty.

However, even in the midst of this discovery, GlobalPost pointed out in their article “Thailand’s scandalous Tiger Temple is forced to release its captive cats” that “even as the government’s campaign to confiscate tigers filled the press, GlobalPost observed a parking lot full of tour buses outside the temple.”

Why did so many tourists continue to flock to the temple when a simple Google search would have revealed the temple’s history of animal cruelty? The answer: They didn’t do their research.

In a time when information is so easily accessible, it’s surprising that so many travelers do not do their research. They may look up a company’s website or read reviews of an animal park on TripAdvisor, but many don’t look beyond a company’s own marketing to see if they are supporting an organization that conserves wildlife or exploits it.

Where is the money going?

For most wildlife attractions, there is a fee to see the animals, whether you go to a zoo, a sanctuary, or a safari. One of the best ways to evaluate whether a wildlife attraction is helping conserve wildlife is to find out how they spend their money.

For example, the Big Cat Rescue, a sanctuary for exotic big cats in Tampa, provides a link on their website to see their nonprofit credentials and financial information. This helps potential visitors see where they get their money and what they spend it on.

To be a responsible tourist and support wildlife conservation, choose to visit wildlife attractions that use the money earned from ticket sales to preserve wildlife species. Support organizations that provide a high quality of life for their own animals through large and well-maintained habitats and quality veterinary care.

Many wildlife sanctuaries argue that even when wild animals are kept in captivity, their environment and habitat should simulate their natural habitat as much as possible. This means that their exhibits should be large, and they should have minimal contact with humans. However, other organizations argue that wild animals accustomed to being handled by humans at a young age are easier to treat medically. There is even a growing trend among wildlife organizations to allow visitors to pet, feed, and hold wild animals. This way visitors can learn about wildlife animals and have a close, personal interaction with the animals, making them more invested in their conservation.

Some zoos and sanctuaries believe that both wild animals and humans benefit from close interaction, whereas others argue that close contact between wild animals and visitors can be harmful to both. There are pros and cons on either side of the issue, so before you go to a wildlife zoo or sanctuary, decide which side you agree with and want to support. Then do your research and find the zoos and sanctuaries whose mission and practices best align with what you believe is best for wildlife conservation.

Where do the animals come from?

Though many wildlife organizations are committed to only rescuing abused or neglected animals, there are also many organizations that take healthy, fully functioning animals from the wild or purchase animals from the black market to create their wildlife attractions. Before visiting a wildlife attraction, make sure that the organization is committed to only obtaining animals through ethical means, such as rescuing retired performing animals, or abused, neglected, or abandoned animals.

How are the animals being treated?

This is perhaps the most important question travelers need to ask before visiting a wildlife attraction, and it is likely the most overlooked. Many travelers come from countries with strict animal welfare legislation and assume that wildlife attractions across the world are held to similar standards.

However, many countries throughout the world do not have strict or even established animal welfare standards. This means it is difficult for governmental officials to shut down organizations that abuse or neglect their animals. This is especially a concern for tourists who want to support wildlife, but fail to research wildlife attractions they visit. “We know that most people looking for a wild animal encounter want to do so because they love animals,” says Jan Schmidt-Burbach, a senior wildlife adviser with World Animal Protection. “They’re simply unaware of the cruelty that goes on behind the scenes.”

There are many businesses and organizations throughout the world that take tiger cubs from their mothers at two weeks old for tourists on holiday to play with. In many places throughout the world there is no government agency to stop animal cruelty, like the mahout, an elephant keeper, who prods an exhausted, dehydrated elephant with the sharp point of a bull hook through the jungle. International government and nonprofit organizations alike are working to end wildlife abuse and to establish global animal welfare legislation, but you can also play your part in protecting wildlife.

Protecting wildlife doesn’t mean boycotting all wildlife attractions, but it means doing your research before going. Be a responsible wildlife tourist. Check websites, look at reviews, and read news reports to find out everything you can to make sure you are supporting wildlife organizations that strive to promote and conserve wildlife, not exploit it.