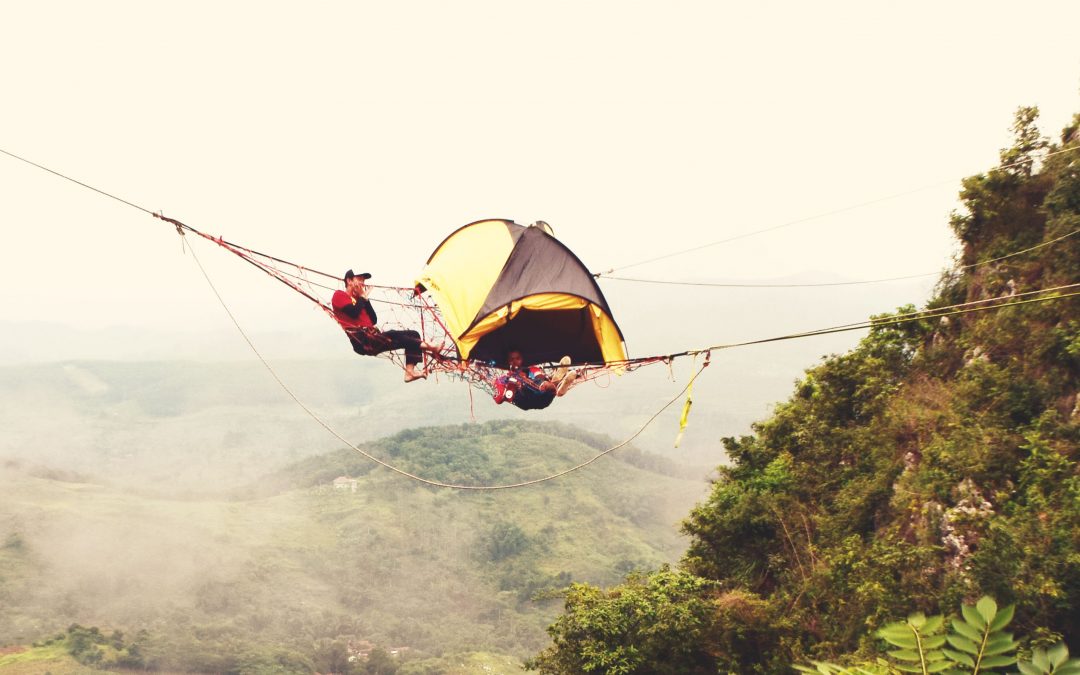 There’s camping, there’s hammocking, and then there’s cammocking—that is, opting for a hammock while camping. Then, of course, there’s extreme cammocking: suspending a 2,000 square foot hammock of weaved rope over a 400-foot canyon.

These woven hammock-like nets are also known as space nets. To Andy Lewis, they’re called thug mansions because, like a 2Pac song, “that’s the only place where thugs get free and you gotta be a G at thug mansion.” And Lewis has every right to call these cammocks “thug mansions”—after all, he invented them.

Lewis, known as both “Sketchy Andy” and “Mr. Slackline,” started the unique fringe activity known as “netting.” The “mansions” originally began smaller, starting as backyard hammocks and nets in trees. Lewis describes his invention as a “mix between a treehouse and a spiderweb.” He began with one tree, then two, and has made his way up to weaving nets that span as many as 20 trees. Perfecting this new and unique craft took Lewis about seven years.

Since then Lewis has traveled across the world, taking his “thug mansion” to places like Spain, Portugal, and Canada. At one point Lewis took his invention to the Borneo rainforest in Southeast Asia, where he weaved giant rope nets in the trees.

“We basically set up the nets like the monkeys set up their nests,” Lewis said.

But Lewis didn’t stop with trees; his favorite place to set up the nets, to hang out on “thug mansion,” is Moab, Utah. There, “thug mansion” spans across canyons.

Lewis said it’s hard to pinpoint where such a wacky and epic idea came from. He said his journey began with rock climbing. Rock climbing led to slacklining, slacklining led to weaving, and slacklining and weaving led to high lining. And then, to top it all off, Lewis added base jumping to his list of extreme sports, and that opened his mind to what was possible: combining his passion for all of these sports into one majorly extreme hobby.

As this new hobby developed, Lewis started adding tents and rope swings to some of his netting. Mostly, he uses his invention to slackline and base jump, although individuals can still harness themselves to the rope leading to the net if they don’t have experience slacklining or base jumping. Either way, the experience isn’t for the faint of heart.

“Once you’re on the net itself, it’s not scary,” said Lewis. “But getting out to it has definitely shown a lot of people their true colors.”

Although Lewis has created this new extreme sport, there aren’t a lot of people who know about “thug mansion.” This is mostly because he doesn’t market it. Instead, he waits for people to find him; that way he knows they’ve done their research and know what he stands for.

And what he stands for is “Slacklife.”

“One part slack, one part life,” he said.

Though Lewis remains mostly off the grid, he has broken the Guinness World Record for the longest highline crossed, highest highline walked, and longest highline walked without safety protection, known as the “Free Solo.” He also appeared in the 2012 Super Bowl, performing on his slackline during Madonna’s concert. But even with all of this fame, Lewis says he does what he does because he loves it, not for the money.

“If I didn’t love what I was doing just for doing it, I never would have spent the time randomly in trees rigging highlines, making nets, and then eventually thinking of a portable net and then putting that in the highline—I mean, it’s just a ridiculous series of events,” Lewis said.

If you’re looking for a way to find one of these “thug mansions,” you may find that it’s easier said than done; Lewis likes people to work for their extreme entertainment. Every now and then, Lewis holds festivals involving “slacklife” and his space nets, but he doesn’t give out the time or location—you’ve got to figure that out on your own from just a few simple clues.

Why, you ask? Because “the joy is in the journey, rather than the destination,” according to Lewis. And as part of that journey, Lewis encourages individuals to go out and start their own adventure.

“What you should ask yourself is, ‘What do I do to build my own net in my own front lawn?’” he suggested. “That’s what is going to be most fun for you.”

Lewis also suggests individuals buy a slackline and cammock and start with the simple things, like getting involved with the community. After all, that’s how it started for him.