Take Me to Space! A Trip Outside of the Ozone 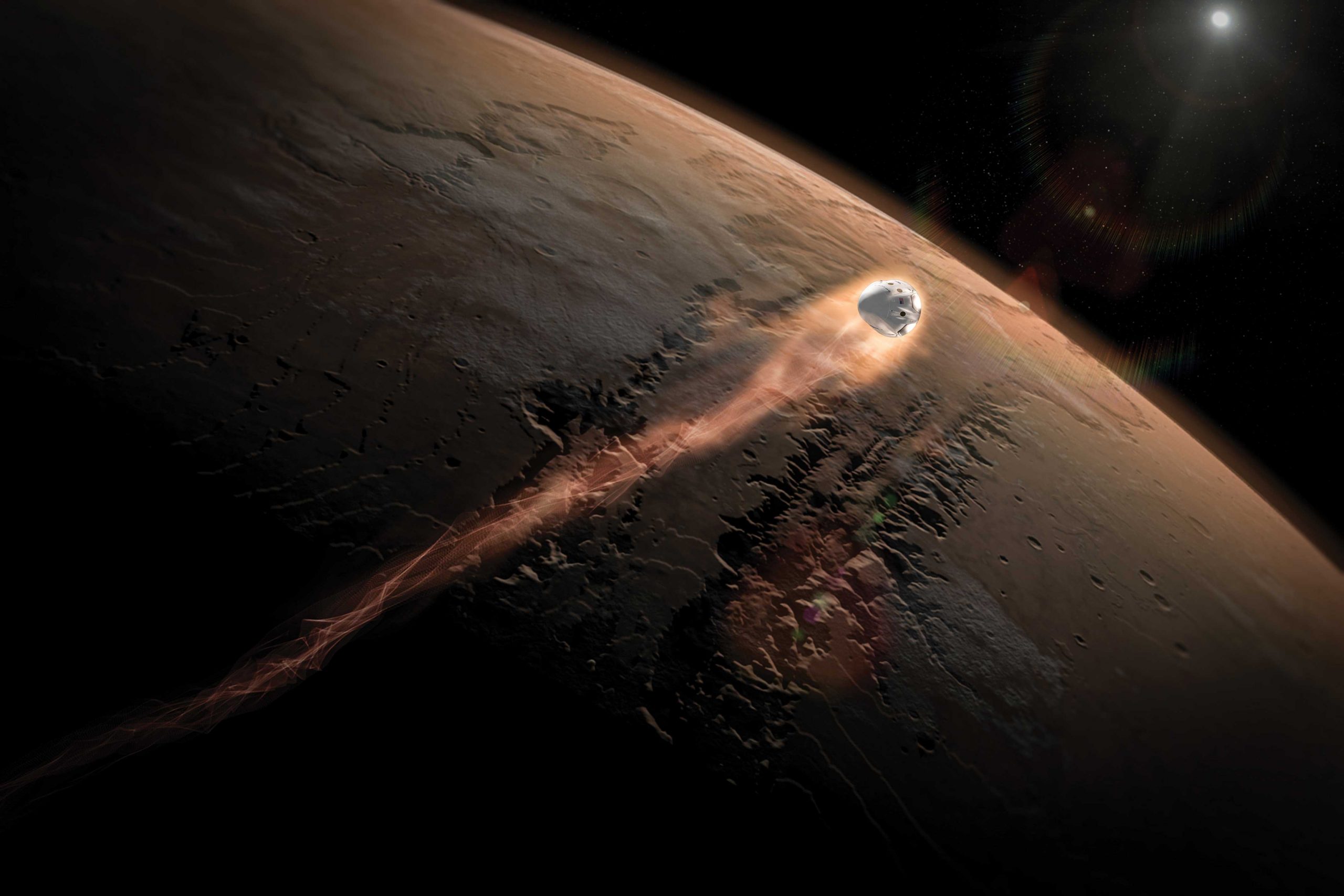 When Neil Armstrong took that first step onto the moon in 1969, millions of Americans witnessed a huge victory for the United States through blackand-white, rabbit-eared television boxes. They had won the great space race and succeeded in landing on the moon. Armstrong had a small glimpse of what the future held as he spoke his iconic words, but his giant leap seems minuscule compared to the possibilities we can see in the near future. Soon travelers will get to choose between Miami, Morocco, and Mars for their next big family vacation.

Concept art of SpaceX’s Dragon landing on Mars. A trip to Mars is the ultimate goal of commercial space expeditions. cc

Holly Hutchison, a Payload Integration Manager of the International Space Station, has an insider’s view of current space travel advancements. “We have been steadily moving forward over the years, which I believe will continue because of mankind’s need to explore,” she says. “Humans are naturally very curious, and I think this curiosity and want for adventure will continue to push us forward to explore the unknown.”

Just as many have a curiosity to explore new places on earth, space enthusiasts have been pushed to see farther into our solar system, our galaxy, and beyond.

The big questions about space travel are (1) When will space travel be available to the public and not just people with huge pocketbooks? And (2) Is space travel actually realistic or is it all just false hopes and dreams?

Programs like Virgin Galactic are taking space travel beyond fantasy. Virgin Galactic is a commercial airline with plans to take people to space. They state their mission on their website, virgingalactic.com: “We are here because we believe we are at the vanguard of a new space industry that is defining the future of exploration and that we will ultimately make space accessible to more people and for more purposes than ever before.”

The airline seems to be heading commercial space exploration. It has the goal of bringing typical travels outside of the atmosphere, but the program still has a way to go. Hutchison says, “Currently, Virgin Galactic has already sold seats to go up into space. I believe per seat they are charging $250,000 and are set to fly in the next couple of years.”

Paying the price of a decent home to go to space doesn’t seem reasonable to middle-income families, and even these flights don’t have firm schedules or departure dates.

“Working in the space industry, I know that flights are never on schedule, and my prediction is that it will be at least another five years before they fly,” says Hutchison. “The day they fly will definitely be an awesome day.”

Hutchison also provides a bit of hope for those of us who don’t have 250 grand lying around: “Eventually, I think space flight will become similar to air travel. It will be affordable and accessible to almost everyone. This will take at least a few decades to reach though. It will take a significant breakthrough for space travel to become affordable to the middle class American. SpaceX just got us closer to that with the successful landing of their reusable rocket.”

SpaceX, an aerospace manufacturer and space transport services company, has a far-reaching and impressive mission to “revolutionize space technology, with the ultimate goal of enabling people to live on other planets.”

So it may become possible for many people to go to space within their lifetime in exchange for their yearly trip to the Caribbean, and ultimately, they may be able to take permanent residence on earth’s sister planet.

Hutchison says, “Right now, the big expedition many people are working on is sending humans to Mars. We will first go back to the moon as a sort of ‘test’ mission, but Mars is the ultimate goal. I think everyone would like to see a non-problematic variation of The Martian happen within the next couple decades.”

However, many would never even consider the possibility of personally going to Mars; they consider the prospect to be a work of fiction.

This mindset may be caused by the many science fiction films that have set the stage for space travel. The starship Enterprise from the Star Trek saga has a mission similar to the current existing space programs in the real world.

The mission of the Enterprise is “to explore strange new worlds, to seek out new life and new civilizations, to boldly go where no one has gone before.” Star Wars, a film franchise equally as explosive as Star Trek, takes place in an entire galaxy where pilots can hop from planet to planet in a matter of seconds.

Fictional stories even include the stories of unsuccessful expeditions. Interstellar, released in 2014, portrays some of the dangers of entering unknown territory in space and on other planets.

Last year, The Martian awed audiences with the story of a man who gets abandoned on Mars after an unexpected storm in space. The science fiction tales of successful and failed missions coincide closely with the reality of space travel in the twenty-first century.

Obviously, it doesn’t take long to come up with risks associated with traveling light-years away from home. Hutchison provides insights to some of these risks and ensures that groups like the International Space Station are very aware of safety concerns:

“Space travel is hard. There is no doubt about it. The environment outside of our atmosphere is not suited for humans and is very dangerous. A number of things could go wrong such as a malfunction of hardware, a glitch in the software, and/or space debris damaging systems,” Hutchinson says. “The way to combat all these different problems from happening is having a numerous amount of back-ups and fail-safes. That way, if one computer stops working, you’ve still got a second one to take over.”

The Crew Dragon spacecraft, designed by SpaceX to take humans into the depths of the solar system. cc

With any trip, there is always potential danger. Travel over land, air, or sea comes with a certain amount of risk. Certainly these concerns are magnified when man travels farther and farther away from home. But with proper preparation and new technology, it appears that hiccups and other dangers will be avoided.

Advances in space travel are exciting and greatly anticipated. From a young age, many children proclaim their desire to become astronauts, and even adults dream of soaring through space. Hutchison, a self-proclaimed space fanatic, is no exception. She sums up these sentiments:

“I think it would be an experience of a lifetime to go into space! I believe just about everyone who works in the space industry has at least a small part of them that wants to go up in space.”

Space research did not start with the idea of people vacationing on Mars or enjoying a drive-by view of Planet Earth. It began with important scientific issues. However, continuous research and curiosity has led to the reality of space travel for anyone who wishes to travel beyond earth’s atmosphere. Soon, many will proclaim their childhood fantasies a reality as they travel beyond the ozone and into outer space.