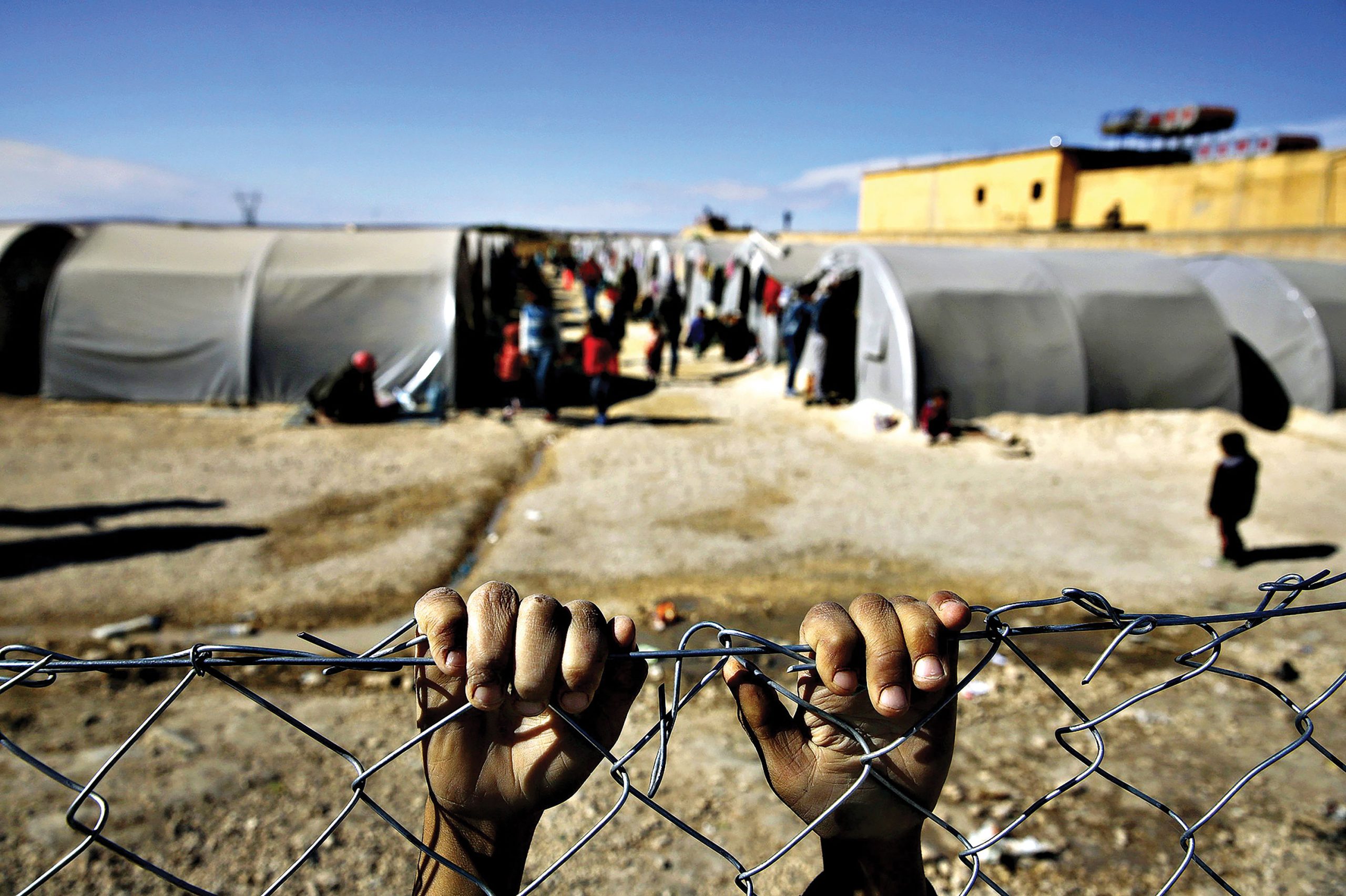 A Kurdish refugee boy from Kobani, Syria clings to a fence that surrounds a refugee camp in the border town of Suruc.

Traveling is a part of the human existence. We travel to explore, grow, evolve, and appreciate. We travel for adventure, education, and interaction.

But there is also a darker side.

There are forced travelers: travelers who leave their homes and their countries because they have no other choice. They may be forced out by natural disasters, environmental crises, or poverty. They may fear for their lives because of war, human rights abuses, or terrorism.

Refugees are a part of this group of forced travelers. According to the United States Citizenship and Immigration Services, a refugee is “a person who has fled his or her country of origin because of past persecution or a fear of future persecution based upon race, religion, nationality, political opinion, or membership in a particular social group. Most likely, he or she cannot return home or is afraid to do so. War and ethnic, tribal and religious violence are leading causes of refugees fleeing their countries.”

Refugees have existed for centuries. However, the surge of refugees fleeing conflict across the globe “reached record numbers and drew widespread attention in 2015,” according to The Borgen Project. The United Nations High Commissioner for Refugees (UNHCR) estimated that the population of forcibly displaced people has reached nearly 60 million, up 15 million from 2012. Of this number, they estimate there are 15.1 million refugees of concern, the highest level in 20 years. An additional 5.1 million registered refugees are located in some 60 camps in the Middle East.

Instability in Syria, the Central African Republic, South Sudan, Burundi, and Afghanistan has contributed heavily to these growing numbers. During 2014, one in every five displaced persons worldwide was Syrian. About half of the world’s refugees are women and children.

A Sudanese refugee mother with her sick child waits for care at the MSF field hospital in
South Sudan. Photo by European Commission DG ECHO. cc

Unfortunately, not all displaced people can become refugees and receive aid and resettle in a new country. These people, called internally displaced persons, or IDPs, have fled their homes but have not crossed an international frontier. There are many more IDPs than refugees because many countries have internal conflict and individuals have no way of crossing the border: either they can’t leave or bordering countries won’t take them. Others don’t fit the stringent standards required to declare refugee status. These people at at best face hunger and uncertainty, and at worst face rape, pillaging, and genocide.

Countless stories could be told about refugees. The accounts are as varied as the travelers, many of whom face an uncertain future. Most are faced with the difficult decision of how to rebuild their lives. However, amid the abounding stories of suffering, there are also stories of survival and success, hope and rebuilding.

Aden Batar is the Director of Immigration and Refugee Resettlement for the Catholic Community Services in Utah. A former refugee, he now helps others find a new life.

“Our goal is to build the refugees in love and compassion and teach them self-sufficiency,” he said. “We want to give them their lives back. Give them back families that they lost.”

In 1992, Batar fled with his family to Kenya from a war-torn Somalia. At that time, displaced persons were not required to live in camps; they only needed to register with the UNHCR. He started volunteering his time in the camp near Nairobi, using his training as a lawyer to help others in the camp. In 1994, he obtained political asylum and was relocated to Logan, Utah, where he and his family began rebuilding a new life.

Despite the difficulties, Batar wanted to be successful in this new community. He knew some English, but his wife didn’t know the language, which he says was very hard for her. He feels being able to communicate with others is crucial to a refugee’s success in a new country.

Language isn’t the only barrier refugees face. Many, like Batar, face the difficulty of finding a place to worship in a new land that may not have many people with their same beliefs. Batar, a Muslim, says that it was very difficult to find a place of worship because there was only one small mosque in Salt Lake when they came.

“The Somalian community began to grow and we had to come together to build a mosque,” said Batar. “Now there are close to eight mosques in the area.”

Batar went back to school to improve his English, further his education, and get certified to practice law in the United States, as he did in Somalia. He also began working with Catholic Community Services (CCS). In 1997, he moved into the immigration department of CCS where he worked as an immigration attorney, helping people to get legal status. In 2001, he was helping with the resettlement of refugees in Utah and in that year became director of the program.

Now Batar helps families in similar situations to his family when they first arrived to the United States. In an interview with Mormon Newsroom, he explained the integration process Utah follows to help refugees. A new family is assigned a case worker, who is usually a refugee from the same country, to help them navigate daily life by teaching them things such as how to ride a bus or how to find a school or grocery store. This case worker helps them adjust to the new environment and connect to their community.

Batar said Utah is unique because it provides up to two years of case management for refugees to help them become successfully integrated into the community.

“Within six months, the majority are paying taxes, contributing to the economy, helping business, and becoming involved in their community,” he said.

Having worked in all areas of the department, Batar says his favorite job was working one-on-one with families, helping them navigate through the system, get jobs, enroll their children in school, and get medical help by interpreting in clinics.

“My favorite part is when I see families reunited. I feel so much satisfaction when I can help loved ones see each other after so many years.”

Batar says that refugees need a welcoming environment where they can feel a sense of belonging. The community can offer this support by welcoming refugees with open arms and reaching out to help them feel comfortable in their new home.

“In order to be successful, they need a friend,” Batar said.

Get informed about the needs of your community and look for ways you can help the refugees in your area. Consider volunteering with local organizations, such as nonprofits, community centers, government resettlement agencies, and health clinics. Be the friend they need so that after a long and traumatic journey, these forced travelers can finally feel like they’ve found a place to call home.