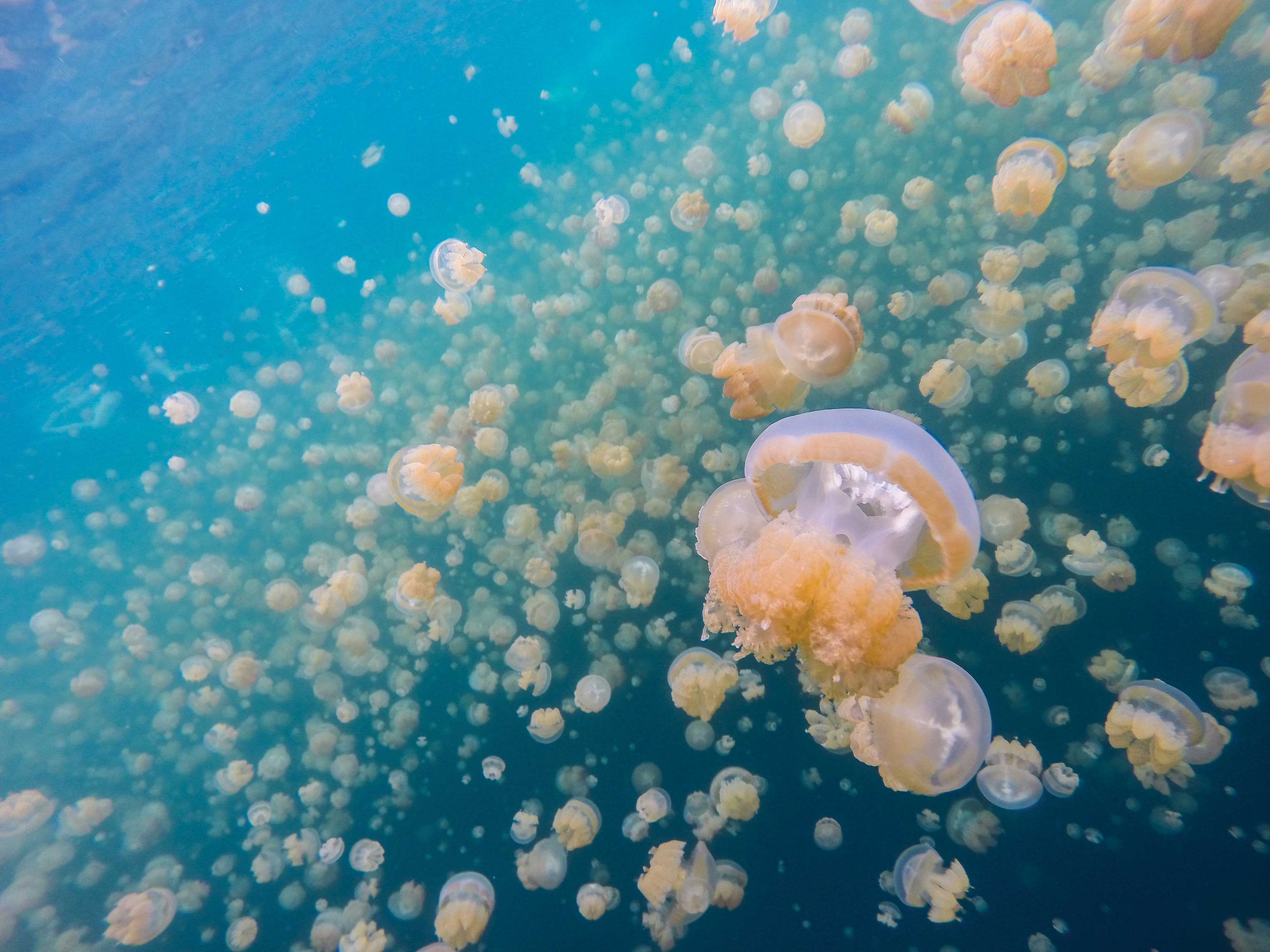 Just imagine it: Micronesia. Sunshine gleaming on the surface of a calm, teal lake. As you slip beneath the warm green waters, you are greeted by millions of pulsating jellyfish—jellyfish that you can brush up against without fear of being stung. It’s an under-the-sea experience that reminds us just how marvelous our world is.

Beachgoers generally avoid jellyfish because of their painful and venomous stings, but the jellies who inhabit Jellyfish Lake on the Rock Islands of Palau are a little different. These golden jellyfish are often called “stingless,” which is a misnomer because they do have stingers. Their stingers, however, aren’t powerful enough to harm humans. Therefore, humans can—and do—take a dip with them.

The Rock Islands are small, rural isles that were created when coral broke through the surface of the ocean. These mainly uninhabited islands are part of Palau’s Southern Lagoon. Jellyfish Lake is a marine (saltwater) lake on Eli Malk, one of the Rock Islands, connected to the ocean by cracks in the surrounding rocks. Additionally, it’s the only marine lake in Palau open to tourists.

The lake has been mostly isolated from the ocean for 12,000 years. Because of the isolation and lack of predators, the jellyfish evolved and adapted to life in the lake. These golden jellyfish don’t need strong stingers to catch prey or to protect themselves. Unlike their run-of-the-mill cousins who eat fish, crabs, and even other jellies, these jellyfish mainly live off algae-like organisms that live in their tissues.

“The jellyfish that live there don’t eat fish, they live on photosynthesis,” says Rick Cobb, who lived on the island for two years. “It’s the only place on earth where that happens.”

For travelers, Jellyfish Lake offers an experience like none other. Visitors can snorkel with jellyfish without worries of being stung. These peaceful and serene jellyfish mainly spend their time migrating back and forth across the lake, following the sun. They aren’t interested in harming humans.

The dreamlike experience of swimming with millions of jellyfish might have you itching to pack your bags and ship out, but there a few practicalities to know before you go.

Tourists stay on the island of Palau, where there are hotels and restaurants in abundance, as well as a small airport. Visitors must then take a boat from Palau to access the Rock Islands (and Jellyfish Lake).

The cost to visit the island can be quite high. The price of a pass to visit the lake (good for 10 days) increased to $100 within the past few years to help with preservation efforts, which were made necessary by the high frequency of visitors. Additionally, most visitors go with a tour group, adding an additional cost. However, these tour groups will take visitors on several adventures besides Jellyfish Lake, including swimming with manta rays, visiting rainbow-colored lagoons, and traipsing through caves.

In addition to the cash cost, there is also a physical price: hopeful snorkelers must hike to reach the lake. Though the hike only takes about ten minutes, visitors say the trek is strenuous. There are several steep areas and a rocky limestone path, so it’s imperative to wear sturdy shoes.

▶ Although the jellyfish’s stingers aren’t strong enough to hurt humans, those allergic to jellyfish should be cautious and wear protective clothing.

▶ Fifty feet below the surface are dangerous—even lethal—levels of hydrogen sulfide, so scuba diving is prohibited.

▶ To avoid harming the jellyfish, snorkelers must wear fins while swimming, but most tour groups provide the needed equipment.

Despite the costs and the considerations, Jellyfish Lake should be on every traveler’s bucket list. Cobb describes the experience as surreal. “It’s counterintuitive—you think one of the jellyfish is going to sting you and you’re going to die but that never happens. It’s incredible,” he says.