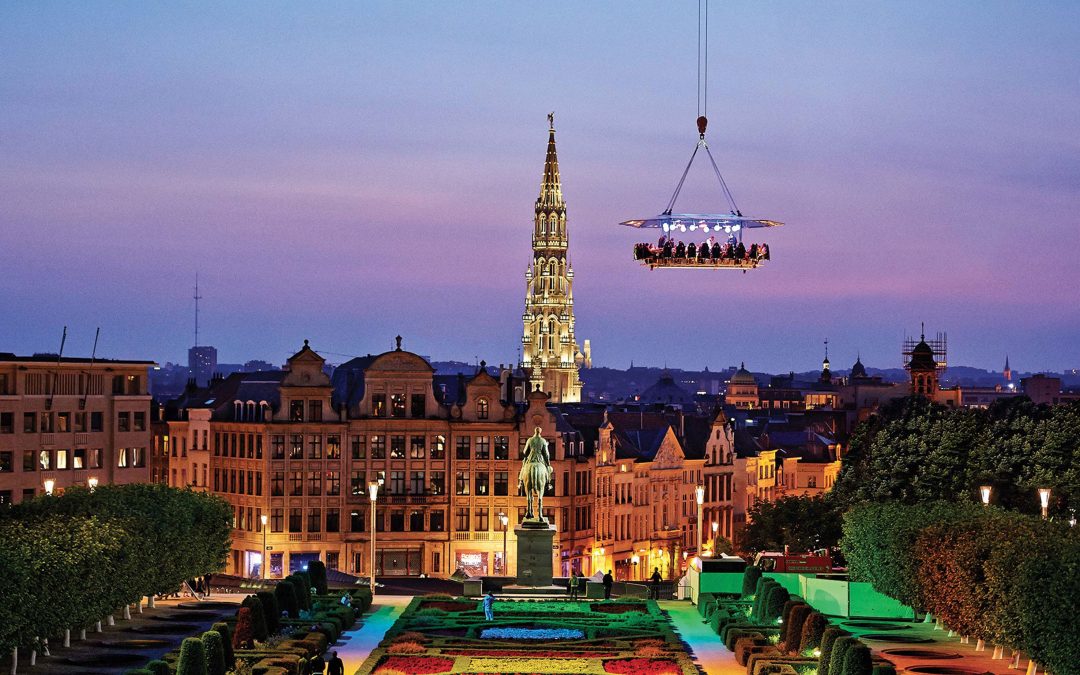 “You have to taste a culture to understand it,” according to travel writer Deborah Cater, and she’s quite right. After all, what is travel without experiencing new tantalizing tastes? What is a visit to Philadelphia without a Philly cheesesteak? Or to Maryland without crab cakes? Internationally, one simply must taste gyros in Greece, Peking duck in China, and massaman curry in Thailand.

Make no doubt about it, eating local foods is a necessary part of gaining the full cultural experience.

But say that the food itself was the focus of a trip. Several restaurants around the world have made it their goal to create a unique eating experience, drawing you to them for a one-of-a-kind dinner. There are far too many strange and extraordinary restaurants than can possibly be covered here, but here are a few favorites.

Turn up the Heat

Why use an ordinary oven when you could use a volcano for your grill or set a chicken ablaze and launch it through the air with a giant catapult? Restaurants El Diablo in Lanzaarote, Canary Islands, and Ka-Tron Restaurant in Bangkok, Thailand, use these unique cooking methods to draw the dinner crowd.

Appropriately named “The Devil,” El Diablo harnesses the heat of bubbling lava—six feet underground and surrounded by nine layers of volcanic basalt rock—to cook its meat and fish entrées on a giant grill laid above the opening of the volcano. 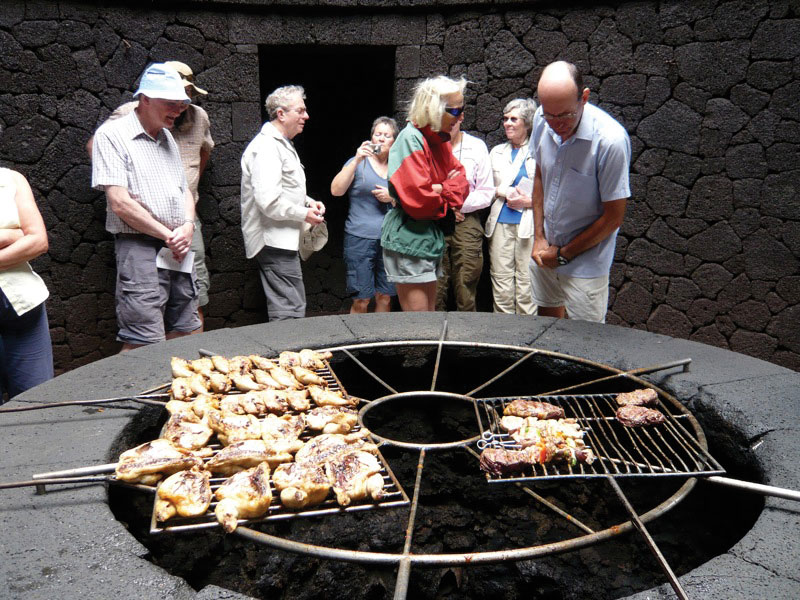 Guests look on as the grill at El Diablo uses volcanic heat to cook the meat for that night’s entrees. Photo by Christine McIntosh. cc

El Diablo’s manager, Julio Padron, says that they consulted volcanic scientists in the construction of this daredevil cooking method, who declared it safe. The excitement of a lava-broiled dinner is supplemented by the restaurant’s breathtaking panoramic views of Timanfaya National Park, framed by the “Montanas del Fuego,” or Fire Mountains, which include roughly 100 volcanos. Fortunately, the last eruption took place in 1824, so guests feel safe enjoying their dinner and the picturesque volcanic landscape.

Ka-Tron “Flying Chicken” Restaurant has been catapulting fried chicken since 1986. Their famous entrée is steamed and deep fried, then set ablaze and launched in the air via a giant catapult to be caught on metal skewers held by waiters on unicycles. How’s that for dinner and a show?

Imagine eating in a parka because everything around you is made of glass, steel, and ice. The Chillout Lounge in Times Square Center, Dubai, is the Middle East’s first sub-zero lounge. It cools temperatures down to negative six degrees for a very “chill” environment.

Upon entering, visitors are given thermal clothing to keep them warm and are invited to acclimate for a few minutes in a buffer room. Once inside the winter wonderland, guests can make selections from a menu consisting of hot soups, sandwiches, juices, hot chocolate, coffee, tea, and a variety of desserts.

The following restaurants believe it’s not just what you eat but where. From dinner underwater to dinner in the sky, these restaurant locations are sure to be memorable.

Sebastian from The Little Mermaid told Ariel that “it’s better down where it’s wetter.” If that is true, then Ithaa Undersea Restaurant is the best. Ithaa means “mother of pearl” in Dhivehi (language of the Maldives), an appropriate name for what New York Daily News called “the most beautiful restaurant in the world” in 2014.

Located 16 feet below sea level near Rangali Island in the Maldives, Ithaa is the first all-glass undersea restaurant in the world. Fourteen people at a time may enjoy the 270-degree panoramic underwater view while savoring fine cuisine from a menu including rock lobster, pan fried duck foie gras, and seared line-caught barrier reef fish.

 Customers at Ithaa Undersea Restaurant in the Maldives enjoy a beautiful view of ocean life through panoramic glass windows while dining. Photo by Ed Ralph. cc

If being underwater makes you a little squeamish but you still like the occasional splash, wade through a waterfall at Waterfalls Restaurant in San Pablo City, Philippines. Located at the Villa Escudero Resort, the restaurant features local Philippian cuisine on handmade bamboo tables set in the running water of the Labasin Falls. Visitors can even get a post-meal massage under the rushing water. No shirt, no shoes? No problem!

Imagine eating your dinner strapped to a chair around a table with 21 other people, dangling 180 feet in the air. This is the reality of Dinner in the Sky where, according to Belgian founder David Ghysels, “The sky’s the limit!” Diners are strapped to race car seats with six-point harnesses around two 29 by 18 foot tables and hoisted in the air by a crane. The chef and serving crew stand on a floor in the center of the tables where they use a convection oven to finalize the three-course meal (plus dessert), most of which was prepared in advance. One crew member also provides entertainment. 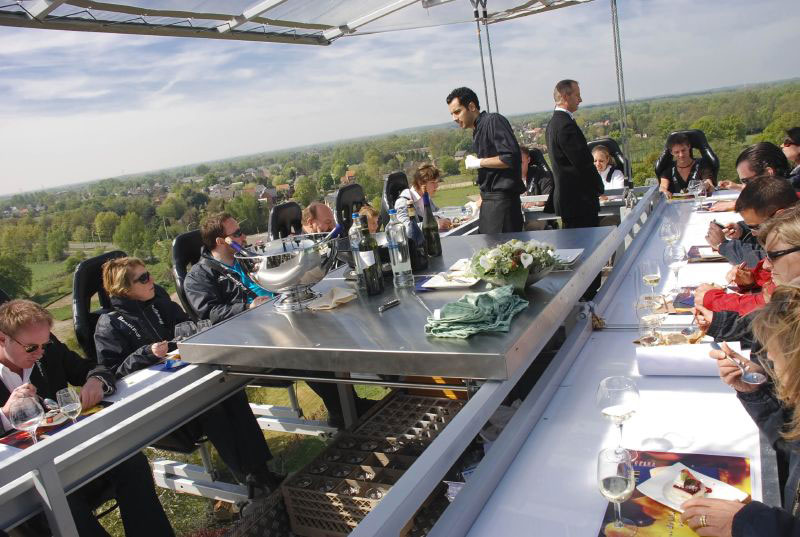 Diners enjoy delicious food and spectacular views at Dinner in the Sky. Photo by Everjean. cc

Although it is based in Belgium, Dinner in the Sky has traversed many continents outside of Europe, visiting over 40 countries, including Australia, India, Brazil, Dubai, Mexico, Japan, United States, South Africa, and China. It is perfect for an open air dining experience; just don’t look down.

Modern Toilet, an unusual name for a restaurant, is located in Taipei, Taiwan. Contrary to what the name might suggest, this is a sanitary eatery with edible entrées. Initially, it only sold chocolate ice cream in toilet-bowl-shaped containers, but the humor caught on, and Modern Toilet is now a fully-fledged bathroom-themed eatery.

Enjoy a variety of entrées, eaten out of miniature-sized toilet bowls while sitting on a standard size loo. Drinks are served in tiny urinals. According to the restaurant’s homepage, their goal is to become “the number one brand in themed chain restaurants.” Their slogan? “In an age where creative marketing is king, even feces can be turned into gold!”

A meal at Modern Toilet, where all food is served in mini toilet bowls. Photo by riNux. cc

Have an appetite for destruction? At Disaster Café in Lloret de Mar, Spain, every meal is served with a 7.8 earthquake. While quaking of that magnitude would normally be enough to force all thoughts of food out of mind, diners at this restaurant pay for the experience.

Things may get slightly messy, but the building is built to keep everyone safe. Dishes are heavier than normal and staff wear construction suits and helmets. No one knows when, but at some point during the meal, the lights go out and the ground suddenly starts to shake. Around here, spills and thrills are the norm.

Shhh! The Safe House restaurant in Milwaukee, Wisconsin (USA) is top-secret. The plaque adjacent the door reads “International Exports, LTD. ESTAB. 1868,” but speak the secret password, and you step inside to find a spy-themed eatery with an escape route. Magicians and DJs frequent the premises, and the top-secret menu offers signature sandwiches, salads, and special entrées. You might even get a top-secret mission. But you didn’t hear it from us.

Featured image by Dinner in the Sky. cc