Hope Rising From The Dust 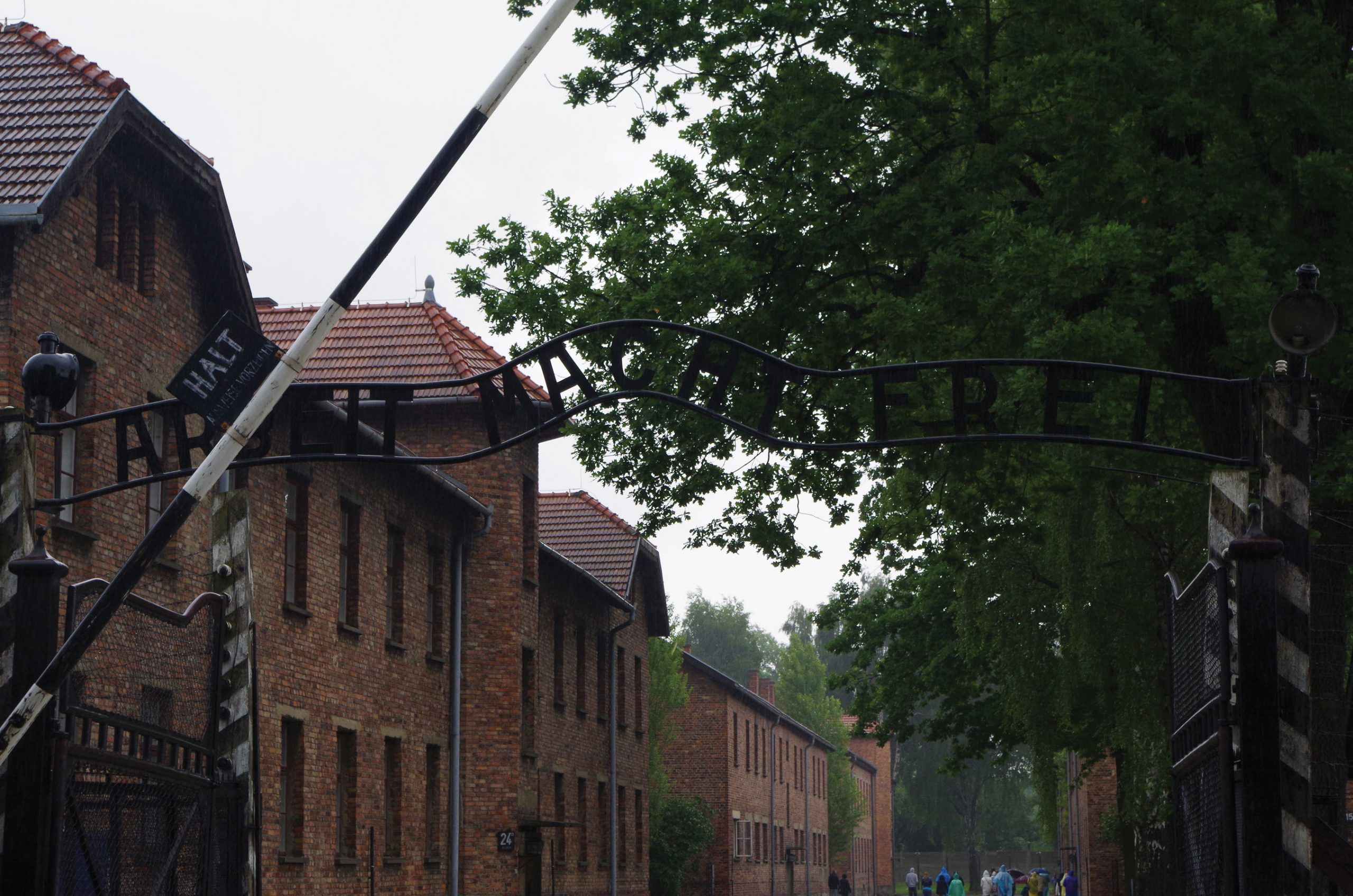 A place can tell a million stories. A building, the landscape, the ground beneath your feet seem to absorb all of the emotion—the pain, the anger, the suffering—of the past. Sometimes if you just stand still and try to listen to the voices of history, you’ll hear them tell their tales. Sometimes, when a place bears a million stories, a million voices wash over you—all begging for you to listen to their story.

The House of Terror

One of the most visited buildings in Budapest is the House of Terror museum. Initially, this building had a relatively unassuming exterior, but because of its gruesome history as a palace of torture throughout World War II and the Cold War, it is now adorned with a metal awning with the word “terror” cut out of it. It has since been turned into an informative and moving museum with exhibits that educate patrons on the horrors that occurred within the building.

The House of Terror is located in the middle of Budapest, between busy streets. Photo by Chris Price. cc

The House of Terror terrorized Hungarians for decades across two political regimes. During World War II, it was home to the Gestapo-like Arrow Cross. At that time, many Jews were held and later executed there. In addition to the terrible atrocities that occurred in the House of Terror during World War II, what happened afterwards during the Soviet Era was just as brutal, more widespread, and lasted many more years. Much of the terror described in the museum refers to this second period—much less known to most Westerners—when the secret police imprisoned approximately one person from every third family in Hungary. Many of these prisoners were tortured and some were murdered.

The rooms in the House of Terror are decorated to tell the stories of those who were imprisoned, tortured, and murdered. One room explains how hundreds of thousands of Germans were deported from their homes in Hungary, and Hungarians from other Eastern European countries were forced to resettle in Hungary. Other rooms display Soviet propaganda and also show how those who attempted to practice their religion were mistreated.

Near the end of the tour, a dark elevator lowers visitors to the basement while showing videos of what happened to some of the unfortunate souls who were imprisoned there. The chilling scene in the basement induces agonizing sympathy for the victims that once suffered as they awaited unfair death sentences while housed in incredibly small cells.

The last few exhibits of the museum—featuring the glorious and long-awaited celebrations that took place when the Soviets left in 1991—entice sighs of relief as they provide a hopeful ending to the tragic history of the building.

No trip to Hawaii is quite complete without a visit to Pearl Harbor to pay respects to the fallen sailors of 1941. In the midst of a beautiful island paradise are the various memorials commemorating the sacrifice of those who fought to protect the naval base when it was attacked.

On December 7, 1941, just before 8:00 a.m., Japanese planes attacked Pearl Harbor, the home of the U.S. Navy’s Pacific Fleet. The fighting lasted around two hours, but the ambush resulted in the deaths of over 2,000 American sailors. During the attack, the USS Arizona exploded and sank, taking those aboard down into the harbor with her.

Visitors today can take a short boat ride to a memorial standing over the wreckage of the USS Arizona, which is the most moving part of the exhibits and other monuments erected in honor of the fallen sailors. Standing by the railings of the structure, visitors can look into the aquamarine water and can clearly see different parts of the sunken ship. This evidence of tragedy creates an ambience of great reverence that washes over visitors as they realize that this is a watery grave, a marine cemetery to those who died here. Guests who look closely can see an unnaturally colored shimmer to the surface of the water near the ship. The ship still leaks oil and gives the surrounding water a permanent sheen—a perpetual reminder of the tragedy that occurred here almost 75 years ago. Yet the shining sun of a gorgeous Hawaiian day fills visitors with a sense of hope that we can bury our sorrows and move forward.

The Killing Fields of Cambodia

Only nine miles away from Phnom Penh, the capital of Cambodia, lies a shrine made of around 8,000 skulls and skeletons—victims of the Khmer Rouge. In what would otherwise be a series of unassuming fields, the bones of only a fraction of the political regime’s victims serve as a grim reminder of the region’s troubled past.

To remember the atrocities of the Cambodian Genocide, Cambodians have filled commemorative shrines and sites with skulls. Photo by istolethetv. cc

Immediately after the end of the Cambodian War in 1975, a communist regime known as the Khmer Rouge took power. Over the regime’s four-year rule, the leader of the group, Pol Pat, and his Khmer soldiers carried out a mass genocide. In a short timeframe, the regime murdered an estimated 1.7 million people—around 21 percent of the Cambodian population.

Nearby the fields is the Tuol Sleng Museum of Genocide, which was where most prisoners were held before they were executed in the fields. The building was formerly a school, but when the Khmer Rouge took control, the sounds of children playing happily turned to anguished screams of the tortured. Similar to the horrific camps of the Nazis in Europe just thirty years before, Tuol Sleng became a prison, a center of torture, a lab of cruel medical experimentation, and a factory of execution.

The pictures and exhibits inside the museum are shocking, but there is little that can compare to the sight of the thousands of skeletons arranged in the fields to pay tribute to those slain there. The sheer number of skulls on display stuns visitors into a silent, somber mood. A slow walk through the fields triggers thoughts of the suffering, the pain, and the anguish of those killed in Tuol Sleng. All of it is almost overwhelming. In this warm, tropical country, these fields have been marked by death. But as tourists return to the bustle of Phnom Penh, they witness a country of people who have not forgotten their grief but have chosen to move past it and look toward a bright future.

The Polish city of Oswiecim is the somber location of one of the greatest tragedies in all of mankind’s history. Some 37 miles away from Kraków lie the infamous three compounds that make up the dreaded Auschwitz.

Auschwitz detainees were kept behind barbed wire so they could not escape. Photo by Bill Abbott.

The well-known gate with the words reading Arbeit Macht Frei (“work will set you free”) greets all who enter the first camp. As with many of these sites, the various buildings in the camp have been turned into exhibits to tell the tale of those who were interned there. Throughout the buildings are huge collections of personal possessions the Nazis stole from the prisoners: shoes, suitcases, glasses, combs, pots, and pans. Some of these collections fill enormous storage containers but represent only a fraction of what was taken—perhaps a few days or a week’s worth of stolen goods.

By far, the most unforgettable exhibit is the huge room of human hair, cut from those murdered in the gas chambers. Even visitors with no familial or personal ties to the Holocaust are moved to tears by the sheer magnitude of the suffering that occurred there.

Occasionally, groups of Jewish teenagers join together to honor their ancestors by singing in Hebrew while visiting the different sites. Their youthful voices of today mix with those of the past in a chorus of emotion.

Visiting tragedy-stricken sites invites a somber reverence for the suffering and sacrifices of those who lived there. Being where these victims spent some of their last moments connects the present with the voices of the past. As you tour these sites, look at their pictures, read their names, and hear their stories. Listen as their voices speak to you through the rising dust.