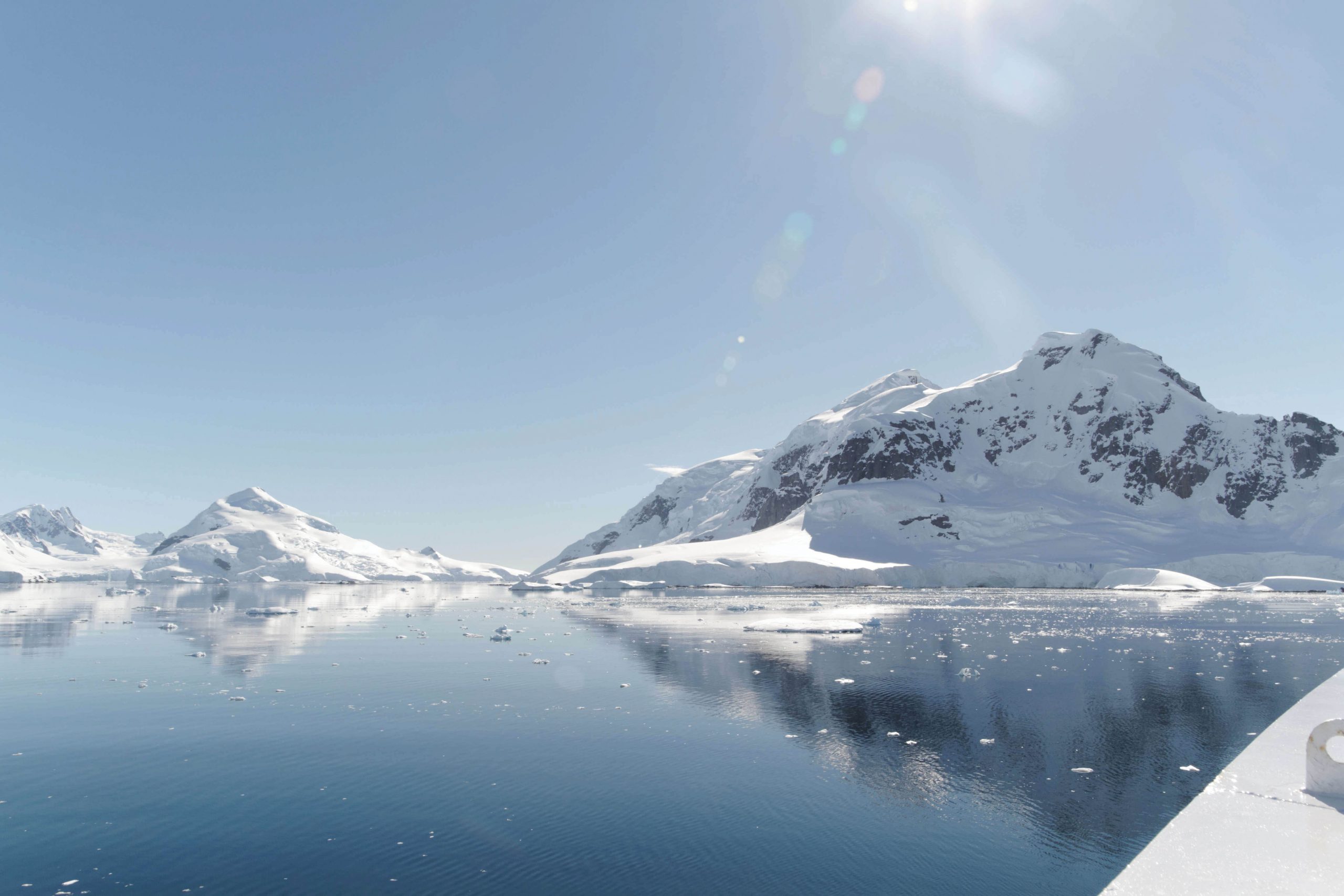 Fly in a helicopter. Hike to a beautiful view. Snowboard and ski. These outdoor activities seem standard to a variety of travel destinations. But add snowshoeing over untouched, snow-white flatlands, hanging out with colonies of penguins, and escalating up icebergs, and your vacation takes a sharp turn—a sharp turn south. Welcome to Antarctica.

Almost twice the size of Australia, Antarctica spans an amazing 5.4 million square miles of land and showcases some of the world’s highest elevations. And despite its persistently frigid climate, Antarctica has welcomed visitors since the late nineteenth century.

Whalers were the first to breach land in 1887, and there’s no doubt that their expedition stirred curiosity. Even the Royal Geographic Society urged exploration of the icy continent as part of their effort to “resolve the outstanding geographic questions still posed in the south.”

Just over two decades later the first permanent station was built by scientific researchers from the Scottish National Antarctic Expedition. Though this monument stood as the only permanent station for forty years, many soon followed and exploration of Antarctica began in earnest, and today, the harsh, ice cap climate of Antarctica is home to state-of-the-art science.

So why exactly is Antarctica such a hot spot for scientific research? It’s simple: Antarctica’s isolation makes it arguably the most untouched region of any in the world. Far from the frozen wasteland some may think it, Antarctica is a pristine natural laboratory—a scientist’s dream.

Many believe that Antarctic visitors are primarily interested in scientific exploration, and that’s not incorrect. Antarctica carries the promise of untapped potential; for the same reasons that scientists are drawn to its purity, tourists are as well.

Jonny Stark, a researcher on the Casey Station in the late ‘90s, participated in a live online chat with anyone curious about living in Antarctica.

Online users asked questions, and the researchers answered them in a chatroom on October 9, 1998. One person asked about activities in Antarctica, and Stark replied that he doesn’t get bored.

“There’s always plenty to do, outdoors and indoors,” he said. “Outdoors I go snowboarding, skiing and on trips to field huts nearby to see wildlife and icebergs.”

Stark wasn’t the only one with a recreational interest in Antarctica. When on-land activities includecamping, skiing, wildlife watching, and mountaineering, and sea-based adventures involve kayaking, paddle boarding, and scuba diving, it’s not hard to imagine where Antarctica gets its charm.

Megan Gorton is a Utah Valley University student from Eagle River, Alaska, majoring in exercise science. Gorton has created a bucket list of life adventures and activities she hopes to complete, and item number 70 on her list stands out from the rest: do a handstand in Antarctica so it’s like I’m holding up the world.

Gorton was inspired by watching “The Buried Life,” a television show about four men who dropped out of school to accomplish their own bucket-list items and help others accomplish their own adventures. Gorton said the show made her feel sentimental, like she hadn’t done anything exciting in life.

She then bought their book and read, “do a handstand in Antarctica so it’s like holding up the world.” And the idea stuck.

National Geographic posted a photo of a scientist in Antarctica doing a handstand in 1996, so the adventure has been around for quite some time.

“There are cruises to Antarctica so I know it’s actually obtainable,” Gorton said. “One day it will happen because I’m already from a cold place, so why not go to the other end of the earth to visit another cold place?”

Though she says she doesn’t know more than the average person about Antarctica, Gorton would “totally” go on a vacation there. “I’d love to get a sun tan from the reflection of the sun off all the snow. Or maybe see a penguin. Plus on the way to Antarctica, I can visit a whole ton more of the earth I have yet to see.”

Tourists have been hungry to see Antarctica for decades. In the 1970s, tourists first discovered that no window-seat view would ever exhibit such indescribable beauty as those of the Antarctic air tours and sightseeing flights.

Flights took off from Australia and New Zealand but never touched base on the icy continent. Today, Antarctica Flights offer sightseeing flights that take passengers from Australia across all of Antarctica in a single day. Passengers enjoy the breathtaking scenery from the warm cabin of the aircraft for as little as $1,200.

Though the SS Fleurus can rightfully boast the first cruising tours of the Antarctic, popularization of these expeditions came decades later. With his launching of the SS Linblad Explorer in 1969, Lars-Eric Linblad was named the father of modern expedition cruising in the Antarctic region. The Explorer was specifically designed for expert navigation of those frigid waters, allowing tourists to experience Antarctica more fully than ever before.

Though Antarctica may be considered to be species poor, there is nothing meager about the wildlife of this region, and tourists see no shortage of Antarctic wildlife.

Despite its extreme weather, Antarctica is home to flourishing species of penguins. On-land expeditions often bring tourists close to colonies of emperor, rockhopper, chinstrap, and king penguins. Antarctic waters are brimming with pods of orcas, humpback whales, fur seals, icefish, and more. Venture out onto these brash waters and you just might be greeted by curious sea-dwellers.

Sea kayaking is said to be the pearl of all Antarctic activities for tourists. Sea kayaking offers an intimate experience with Antarctica’s wild side. Gliding among the drifting ice and glacial bays has been called “humbling” and is heralded as the “perfect addition to any Antarctic adventure.”

Kayaking through the frigid waters, tourists carve their own paths past high glacial walls of sparkling ice. Glaciers calve large slabs from their mass as they wend their way about the gelid sea. And kayaks and glaciers aren’t the only drifters; often afloat these majestic waters are lounging seals, engaged in the Antarctic version of pool-float sunbathing.

Stretching so far that it nearly disappears into the horizon, the Ross Ice Shelf is a must-see for visitors to Antarctica. When tourists travel by ship in the early morning hours, they can see a cold layer of air just above the waters obscuring part of the shelf, creating the illusion that this icy mass is floating above the water.

Ross Island, the nesting ground for nearly half a million Adélie penguins, remains the southernmost reachable Antarctic island. The island was formed by four volcanoes—yes, Antarctic volcanoes—the most notable of which is Mount Erebus.

Though it may be only the second tallest Antarctic volcano after Mount Sidley, Mount Erebus is

Antarctica’s most active volcano, the truest pairing of fire and ice. Roaming across the landscape, tourists observe exceptional phenomena. From beneath the frozen crust, steam rises from the tops of ice fumaroles, tower-like structures that stand as sentinels of the frosty expanse. But these icy giants aren’t the only distinguished stop on this cruise.

Touring Antarctica in mid- to late-June likely assures visitors another experience exclusive to this region.

Solar flares release particles and electromagnetic energy toward the Earth, causing the phenomenon known as Aurora Australis, or the Southern Lights. Often magenta and green in color, these intense solar bursts manifest as soft, luminous sheets of mesmerizing iridescent light.

With such magnificent opportunities unique to this continent, it’s no wonder that tourist traffic to Antarctica is steadily increasing. According to the International Association of Antarctic Tour Operators (IAATO) statistics for the 2000–2001 season, there were 12,248 seaborne and land-based tourists travelling to Antarctica. By the 2014–2015 season, that number had tripled to a staggering 36,702 tourists and counting.

This recent influx of visitors has not gone unnoticed either. The Antarctic Treaty has imposed sanctions on anyone traveling to this uniquely unspoiled landmass in an effort to maintain Antarctica’s scientific and ecological value. Their basic rule of thumb? Avoid disturbing the wildlife and enjoy your Antarctic journeying.

Robert Swan, a living legend for being the first man to walk both the north and south poles, promotes the standards that the Antarctic Treaty represents.

Swan is founder of the movement 2041, a movement aiming to keep the Antarctic Treaty protecting

Antarctica from exploitation. In his TEDx speech, Swan says, “We should fight, fight hard for this one beautiful, pristine place left alone on Earth.” Tourism could have a largely negative impact on Antarctica—but it doesn’t have to. It only takes the delicate crunch of one step onto the crisp Antarctic snow to understand why this landmass is considered so precious.

Swan is leading a group in early 2016 to tour the land of Antarctica. The group is essentially a group of international tourists, much like any other, but these particular tourists will be exploring Antarctica while learning about responsibly caring for this magnificent part of our earth.

AdventureSmith Explorations’ Carbon-Free Cruising campaign is just another way that Antarctic visitors are working to reduce adverse human effect on this snow-blanketed expanse. These measures allow tourists to experience the wonders of Antarctica as unobtrusively as possible.

Tourists of Antarctica return with an abundance of adventure stories, but, more than the adventures

themselves, tourists arrive home struck with awe. It is the potential of the vast unknown, the indescribably beautiful wild—the thrilling idea of an otherwise humdrum handstand—that makes Antarctic tourism truly remarkable.

So take a boat, fly in a plane, walk from one pole to the other: whichever way you get there, the only way to really know the wonders of Antarctica is to experience it for yourself.