Siena, Italy: The Race of Life 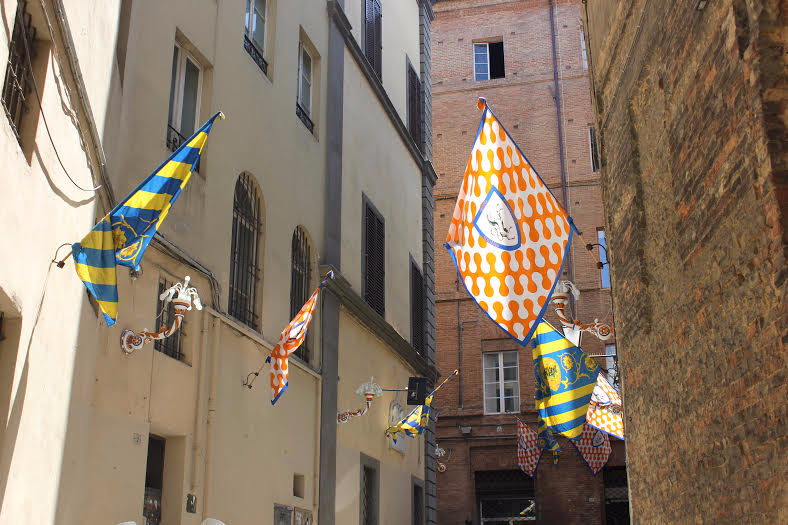 The stone streets billow with pedestrians, taxis, delivery trucks, Fiats, mopeds, and pigeons. Every one in ten Italiani is walking a dog. A one legged pigeon hops quickly away from a curly-haired toddler whose sole intend is chasing down the cagey, little creature. The perfume of restaurants mingles with the heavy presence of cigarette smoke. Groups of tourist mosey through the streets and it would seem like the average Sunday afternoon in Siena, Italy . . . until the drums start. As the cobbled streets twist and intersect, so do the crowds, waiting around every corner for the cadence and it’s carriers. Then without warning three boys in medieval attire blossom into view. In the lead is the drummer followed by two flag bearers whose broad weeping movements brush over the closest pedestrians. These boys belong to the Contrada Capitana dell’Onda, the Wave Contrada. Their legs are clad in light blue and white stockings with matching tunics and caps. The small procession stares forward, well-rehearsed and unphased by the crowds.

In a few weeks the first of two horse races known as the Palio will begin. Each year in Siena, 10 of the 17 Contrade, or neighborhoods, enter a horse into the famous race. The race itself takes mere moments since the riders only complete 3 laps around the track. However, the weeks leading up to this historic event are full of parades and celebrations, the celebration of an age old culture. The contrade are 17 distinct areas of the city, once originating from guilds. Centuries of competition has created a city of allies and rivals. What started as family rivalries spurred by decades of disputes has become tradition when each year, allies and enemies come together for three turns of the track. The rivalries in this city run deep, to the point where one would wonder if Siena is a city united by the Palio or divided by it.

Luca Bonomi, director the Dante Alighieri Institute of Siena said of the rivalries:

“I have a colleague who is from Contrada dell’Oca, I did not know when I hired her,” He says shaking his head, chuckling. “During the year, we talk, and we are good friends. She often stops by my office to chat. But during the Palio we say ‘hello’ and ‘goodbye’ and that is it.”

Because most Sienese live the totality of their lives in the same neighborhood in which they were born, these strong rivalries are as real today as they were decades ago. The rivalries between contrade started when different contrade would offend one another by killing a member of a different contrada. Similar to gangs in America, the contrade held grudges and took revenge. “We don’t kill each other anymore,” Rebecca Mencaroni of the Onda Contrada explained. But from birth, members of opposing contrade are taught to dislike one another. “They are ugly, they are ugly, they are ugly.” Mencaroni chants, as if this were her bedtime lullaby. Even upon the allies, Mencaroni cast a pessimistic light. “Yes, we have allies, but not really. Even they are too lowly for our notice.” This view however doesn’t stop the contrada members from mingling. Mencaroni herself, a member of the Wave contrada is dating a man from the Tartuca Contrada. “We’ve been together for seven years; after the first few years we learned to just not talk about the Palio.” Mencaroni shrugs with a smirk. And while most of the contrade dislike one or two other contrades and tolerate the rest, there is one contrada which is hated above all else: La Nobile Contrada dell’Oca, the Goose Contrada.

Within the museum of the Oca contrada sits a glass case housing 17 miniature horses with jockeys, each a representation of the 17 Contrade of Siena. Each rider is seen looking towards the starter, waiting for the gun, ready for the race…except one. The rider from the Torre Contrada—The Tower Contrada, blood rivals of the Goose Contrada, gazes off, a dim expression in his eyes. The museum guide, Duccio Amandolini, points our attention to the case, chuckling. Humorously, he tells of the rivalry with Torre, and how this simple piece of art expresses their feelings for the members of the Tower Contrada. During the 2007 Palio, there was a photo finish between the Goose and the Tower. “For about ten minutes no one knew who had won. Thankfully it wasn’t Torre.” Amandolini sighs. The room we stand in is so full of winning banners that the Oca contrada is running out of room to house all of their victories. “But it’s a good problem to have,” Amandolini grins. With the most wins recorded, 66 to date, Oca is not well liked by her competitors. But such is the case with all other rival contrada. It is not uncommon for rival contrade to get into scuffles during the Palio. Five Palios ago, a jockey was dismounted and members of the Istrice Contrada jumped the barriers and commenced beating the jockey. Istrice was punished with being expelled from five consecutive Palios. To lose the Palio brings disappointment, “but to watch your rival win, is misery.” Mencaroni soberly explains. “No one else can understand your joy and your misery like your contrada.” Truly, the bonds of contrada members is like unto that of kin. Some contrade even get into mischief like brothers often will. The contrada of the Snail, Chiocciola, is known as the Saint Drowners due to an incident involving the contrada well, the rival’s Patron Saint Anthony, and a strong grudge. Today the well is boarded over probably to discourage other angsty contrada members from throwing more patron saints into the well. However, there are rules that bind the contrada on decorum during the Palio. In another infamous incident, some adventurous individuals decided to steal the the flags of Valdimontone Contrada—the Valley of the Ram Contrada. When the enemy contrada—Contrada Del Nicchio, the Seashell—saw the flags being stolen, they stopped the thieves and returned the stolen banners to The Valley of the Ram Contrada.

So where is the line drawn? What is too far for these warring neighbors? At the end of the day who declares if stealing a flag or “drowning” a saint is the higher offence? But for the people of Siena, the Palio is not just a set of do’s and don’ts, rivalries and alliances. “Il Palio `e Vita!” Mencaroni beams. The Palio is Life. Once you understand that, there’s nothing else to know. “During the winter, we are one.” Mencaroni continues. In fact, the contrade spend all winter deciding on possible jockeys. Since the horse is randomly drawn only four days before the race, there must be several options of who will train with the cavallo. But when the July Palio crawls ever closer, Siena is no longer one unified city but 17 contrade, out for glory, victory, and the months of celebrating that follow in which the winning contrada parties all night so that their enemies know of their defeat.

Even now, the flags of the different contrade line the streets, snapping in the breeze, boasting of their power, their strength. Around every corner they sing the songs of tradition and history and a city divided. And yet, something about the way they converge, changing from one contrada to the next without a break, seems to whisper of the unity held within the city walls. After all, without one another, there would not be competition. Without competition, there would be no Palio. Without the Palio, there would be no life. As we know, in the words of the Sienese, Il Palio e Vita!