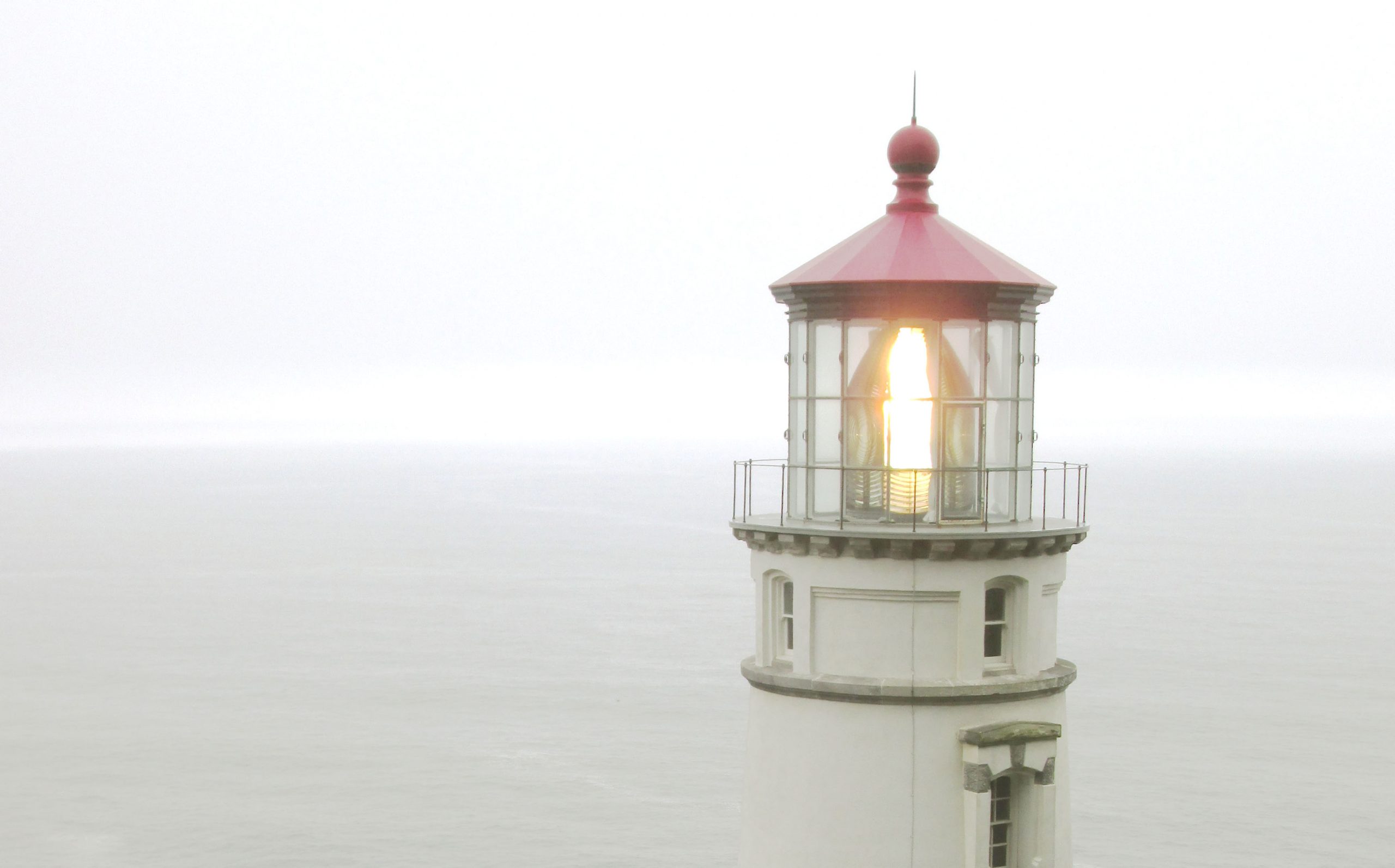 We’d had good weather the previous two days, high clouds with frequent blue sky and sun peaking through, but then we drove south on Highway 101 from Newport, Oregon, that afternoon of the third day. Our luck ran out and we got the normal spring conditions, low clouds blocking our view of everything except rain on the windshield. We were due back in Eugene, fifty miles inland, that evening. It looked like this last part of our trip might be a bit of a bust. Still, our older son told us that he wanted to see at least one lighthouse as long as we were out here by the ocean, so we took a chance and turned off at the sign for the Heceta Head Lighthouse.

If you don’t turn off the highway here, it continues over a bridge and through a short tunnel, and you might have no idea what you just missed. The bridge itself is worth stopping to admire. It’s a vintage assembly of concrete arches from the art-deco period that stands about one hundred feet above a narrow valley and short stretchof beach.

On the north end of the beach is a half-mile trail that winds its way up the headland, a cliff that juts out into the ocean. The lighthouse itself is only 56 feet tall here, shorter than many, but it sits about halfway up Heceta Head, allowing the light to be seen for about 24 miles offshore.

Just from the parking lot east of the beach, the view of the lighthouse is striking as it sits on the hillside. Fog and rain add just the right mood for the scene. Tired of sitting in the car, we were happy to grab our umbrellas and hike up the trail.

It was almost 4:00 pm when we reached the lighthouse, but the park volunteer waiting there was happy to give us the last tour of the day. As tour guides do, he reviewed the history of the place. The lighthouse was finished in 1894, specifically to warn passing ships of the unusually shallow water along this part of the Oregon coastline. The lighthouse was constructed before the road or the bridge. Building materials were brought by wagon, at low tide, along the string of beaches stretching from here to Florence.

Electricity didn’t reach Heceta Head until 1940. Before that, a team of lighthouse keepers lived in two nearby houses. A living sermon on dedication, the keepers kept the light constantly burning with kerosene. Every morning, the keepers would wipe black soot off the lighthouse’s focusing lens and the tower windows. Every few hours they would wind the clockwork mechanism that turned the light, like a giant cuckoo clock, or old-style grandfather clock. They would hoist a two hundred-pound weight up the center of the lighthouse on a large chain. The weight would then gradually drop back down, click by click, and this would turn the clockwork that turned the lighthouse beam around.

This particular lighthouse is still in operation, now automatically turned by electric motor and lit with a single 1,000-watt bulb. It is a small technological miracle from the nineteenth century, the Fresnel lens, that enables this still relatively tiny light to project a focused beam for all those miles out to sea. It flashes every ten seconds, a frequency unique to this specific light, which tells sailors offshore which lighthouse they are seeing and therefore where exactly they are relative the coast.

There are two especially nice features of this lighthouse. First, you can get right underneath the focusing Fresnel lens and get a good look at it, a beautiful piece of layered glass-crystal work. Second, you can hike a little further up the headland here until you are eye-level with the lighthouse beam itself. There’s something hypnotic about waiting for the beam to pass by as you count off the seconds.

One of the lighthouse keeper’s houses still stands and is now a bed-and-breakfast run by the Forest Service. Presumably if you stayed here long enough, you’d see what the place looks like on a clear day, but even an hour spent here in the rain is well worth the time.

It’s a bit of a gamble, driving down Highway 101 on the Oregon Coast. You spin the weather wheel, and you might get stunning views from high cliffs over the sparkling Pacific; moments later you’re driving past another gorgeous stretch of sunny beachfront between the headlands that stretch out into the ocean.

Play your schedule cards right, and you might have time to stop at every high overlook and explore every sunny beach, and hike miles of coastal-forest trails connecting those beaches. Unfortunately, cold statistics are never the gambler’s friend: rainy overcast days are far more likely in this part of the country. It may take long enough to drive over to the shore that there is no time to just hang out and wait for the sun to emerge from the clouds again.

Cooperative climate is never guaranteed, and most of us can’t wait until we have days of free time. It’s great to get those things: the statistics work in your favor if you travel often enough; you’ll occasionally win a perfect day or week. It’s best to hedge your bets though with places where you can spend either minutes or hours, and where there’s scenery that can remain impressive even under mist and cloudy skies.