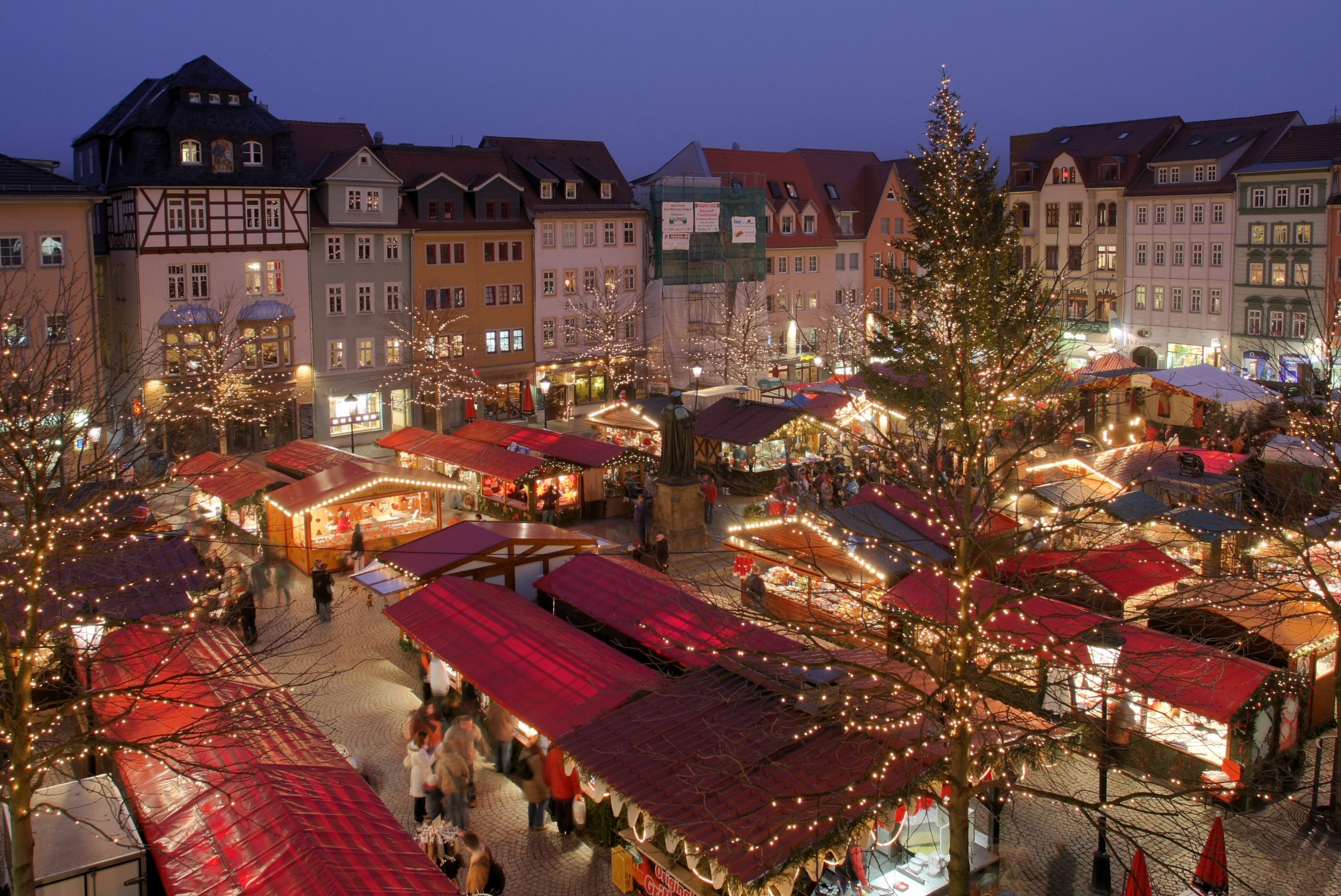 It’s dark and cold outside, but that doesn’t seem to bother the hundreds of people moving around in the open square, walking from stall to stall. Twinkling lights illuminate the Marktplatz as visitors drink mulled wine with friends, eat a bratwurst on Brötchen, or snack on some Mandeln. Others buy handmade gifts for loved ones, while parents take their children for rides on the Karussel. It’s Christmastime in Germany, and with the season comes the traditional Weihnachtsmarkt.

German Christmas markets have been a tradition since the seventeenth century. Originally meant to entice churchgoers to attend services, the markets have since turned into a more commercial venture for businesses, restaurants, and entertainers. Many of the larger cities like Frankfurt, Berlin, and Leipzig run their Christmas markets from the end of November until the week before Christmas. Small towns also have their own Christmas markets that span just one weekend.

Christmas markets open everywhere, but which ones are the best to visit?

One major difference between markets is size. The markets in small towns can take an hour or less to pass through, while a larger one could take half a day. Smaller markets are put on by organizations in the community, while large markets have booths that are run by businesses.

Dr. Ralf Grünke, a city councilman for the town of Nidderau, says that Christmas markets contribute to a sense of community in the smaller cities. He explains that citizens mark the event on their calendars in advance and that, in the town of Nidderau, many of the citizens are involved in contributing to one of the booths in some way.

“Large markets are usually located by buildings and landmarks that tourists wouldn’t want to miss, anyway,” Dr. Grünke said. “Personally, I prefer smaller markets where booths are usually run by local schools, clubs, churches, or community groups. They often are very charming and have more character.”

Charlotte Bauman, a resident of Büdingen, said that knowing what kind of market to go to depends on what you are looking for. Charlotte prefers the smaller markets because they have a lot more people, but she noted that larger markets might have better entertainment.

A carousel at the Christmas market in Dresden, Germany in 2014. (Photo by Charlotte cc)

When it comes to buying gifts, Charlotte said that the stalls will be similar no matter where you go, so it doesn’t matter too much if you visit a larger or smaller market; however, bigger markets might have a larger variety.

While the larger markets may have more variety for gifts, Charlotte said that Christmas markets, no matter the size, are a good date idea. She went on a date to a Christmas market in 2013 and remembers it fondly.

“It was fun and romantic,” Charlotte said. “It’s cold and you are close to each other, even if you aren’t holding hands, sharing snacks . . . it was just short, but very fun.”

“The problem with the small ones is that most of the stands are for food or the same kind of kitsch, so if you’ve seen one, you’ve seen them all,” Aileen said. “I like the small ones to meet friends and eat, but the big ones if you want to see some other stands.”

But Aileen’s favorite markets are small markets that are themed like the medieval festival in Ronneburg. “The best ones are the small ones with a theme like the Middle Ages, because you can see fun ‘new’ stuff,” Aileen said. “It’s different and brings another flair.”

At markets like the one in Ronneburg, the vendors all dress up in medieval garb, and the market is centered around the castle, as opposed to being located in a one of the town squares. These particular markets aren’t just a showcase of German culture, but a snapshot into its history. They have stands with vendors selling handmade candles and even a candy maker who demonstrates how candy was made during the Middle Ages. However, unlike other Christmas markets that are usually free, these markets cost some money to attend and only run for one or two weekends.

Aside from medieval markets, there are also markets that entertain a theme throughout like the Markt der Engel (The Angel Market) in the Neumarkt in Cologne, where most of the decorations center around angels and attendees even dress like angels, wings and all.

The city of Nuremburg, Bavaria, holds a Christkindlemarkt. “There you may run into the Christmas, an angel-like figure who, in some parts of Germany, is the one who brings gifts to children [instead of Santa],” said Dr. Grünke, who grew up in the town of Erlangen near Nuremburg.

Despite the many Christmas market options, the important thing to do is to attend at least one. Aileen added that if you are looking to experience a little bit of German culture, it doesn’t matter what kind of Christmas market you go to since each town adds their own unique flair when they set up their market. Anywhere you go, you are sure to find delicious food and handmade gifts like nutcrackers or wooden nativity sets.

“We went to a market and I can’t remember a lot, but what I remember is buying our pretty crib [nativity] figurines, and I was allowed to buy one sheep just for me,” Aileen said. “It was the most beautiful thing I’ve ever seen!”

No matter where you go, attending a German market will be a memory to last a lifetime. For those who live in Germany, it’s a memory they look forward to making every year. “Every year, I enjoy the moment when the lights on the Christmas tree in the middle of our medieval market square are turned on during the opening ceremony,” Dr. Grünke said. “What a view!”