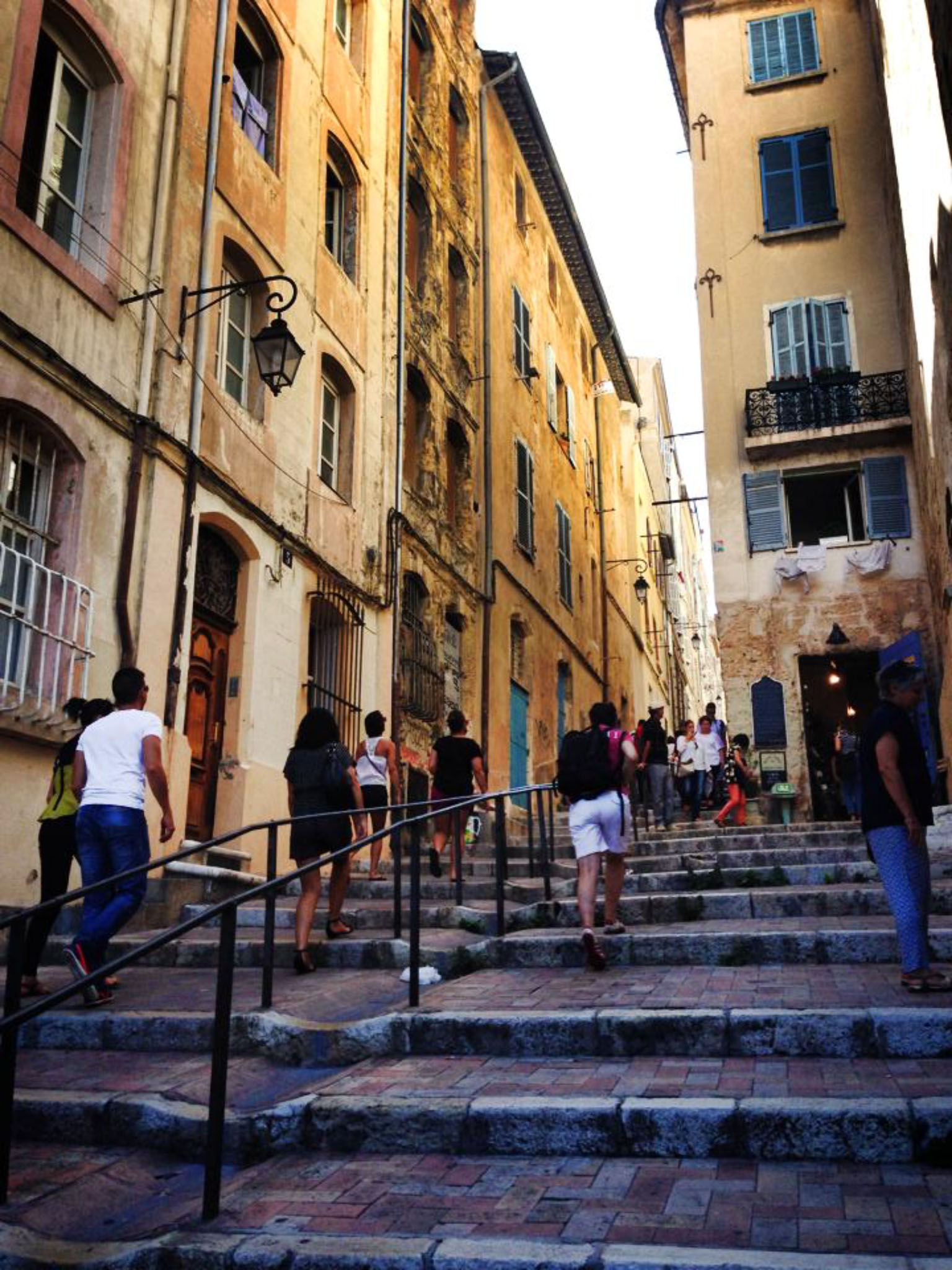 When the Nazis occupied France during WWII, resistance fighters and Jews hid in the mazelike neighborhood called le Panier. Photo by Jared Rutman; all rights reserved.

Just three hours from Paris by train lies Marseille, an unusual French city warmed by the Mediterranean sun and flavored by a distinctly North African feel. Marseille is France’s biggest port city and has served for centuries as a gateway between Europe and the Maghreb (Algeria, Tunisia, and Morocco). While all of France has a large percentage of Maghrebi immigrants and their descendants, Marseille’s population is especially diverse. The city’s vibrant blend of cultures makes it unlike any other place in France.

The oldest neighborhood in Marseille, le Panier, is also its most charming. It’s a vibrant collection of homes, restaurants, art galleries, people, and cultures. At the Atelier Arterra, visitors can watch painters add color to hand-made nativity miniatures known as santons. Le Glacier du Roi features beautiful ice cream desserts, keeping with the French adage that “presentation is half of the taste.” At her store, “Adjanas,” a Togolese woman named Adjara Nassiki sells her own line of unique, colorful clothing for women that has been described as “a mix of cultures.”

Jared Rutman, a Californian who interned in Marseille, got lost in le Panier on the way to visit an old, blind woman. Watching the Marseillais (a term for the local people) playing pétanque and taking their lunches slowly at outdoor cafés, he marveled that this was real life for those people. When at last he found the woman’s house, to Jared’s surprise, she gave him a tour of the area. “You tell me what street we’re on, and I’ll tell you which way to turn,” she said. Then she showed him landmarks like her favorite grocery store and the bar where she always goes to drink with her friends. Marseille “became a real place for me,” Jared remembered.

A Detour to Algeria

Bordered by tiny tea shops and oriental bakeries, a market called the Marché des Capucins (more commonly known as Marché de Noailles, after its metro stop) is the first place visitors should go to experience the blending of cultures that is Marseille. The booths stretching along the rue Longue des Capucins offer every exotic spice and herb you can imagine. Native Marseillais and native Algerians alike agree that this market, which also sells produce, fish, spicy sausage, North African pastilla, oriental flatbread, and French baguettes, seems to come straight out of North Africa. Its vegetables are the cheapest, its mid-morning sales are promising, and its popularity never wanes—the market is always bustling with French, Africans, and tourists alike.

Especially around the cours Julien, a neighborhood that the city’s tourism website calls famous for its “artists, rebels, musicians, and bobos [hipsters],” a stroll through Marseille’s streets can be like a trip to a museum—a street art museum.

Last July, to celebrate its street art, the cours Julien hosted Marseille’s first street art festival. Spectators flocked to the sixth arrondissement to see performances by professional street artists, who were invited to create new works of art using spray paint, stencils, collage, wire, and photo projections. Between 6:30 and midnight one evening, nine different galleries spiced up their street-art exhibitions with music, dancing, and drinks. This event was typical of Marseille’s vibrant nightlife, and further street art festivals are sure to come.

Atelier Juxtapoz provides a two-hour walking tour through Marseille with a guide who specializes in art history. The tour is geared toward youth ages ten and up, as are Juxtapoz’s graffiti workshops, which allow youth to collaborate on a new piece of street art.

It’s hard to be in Marseille and not feel like you’re on vacation. Throughout the year, average temperatures range from 45 to 75 degrees Fahrenheit. In southern fashion, the atmosphere of Marseille is more relaxed than that of Paris, and the beaches are always full. But aside from the pull of its coastal location, Marseille attracts visitors with its promise of a rich blend of cultures and a glimpse into what happens when North Africa meets France.