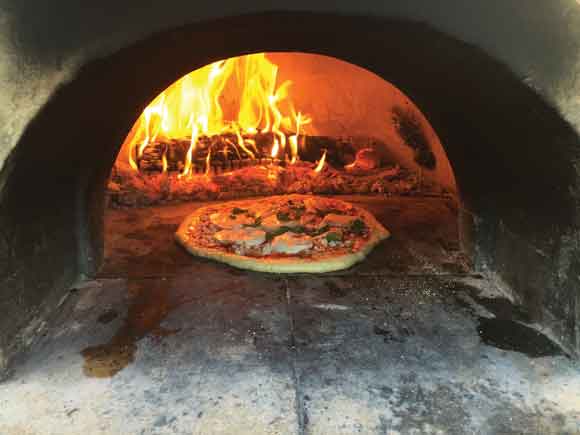 Not all pizzas are created equal. Delivered or picked up, gourmet or mass-produced, frozen or fresh—pizza is for everyone.

Pizza has become a classic and quintessential American food. We eat pizza at birthday parties as kids, for late night snacks as students, and for quick dinners as adults. The greasy, cheesy pizzas in flat, square boxes that stack so nicely are a comfortable and familiar sight to most people. But what about pizza outside of America? What about pizza in Asia, the Middle East, South America? We know that even across America, styles of pizza can vary dramatically, but that is nothing compared to the different styles of pizza across the globe.

Many pizzas around the world are fairly traditional and similar. In Italy, the Neopolitan pizza consists of a thin crust with mozzarella cheese and tomatoes. This lends itself to the American pizza and serves as a

basis for most other pizzas. Like the Neopolitan, most pizzas start with a bread base. With France’s Tarte

Flambé pizza, the crust is thin and crepe-like. Georgia’s Khachapuri pizza has a thicker, cheese-stuffed dough. In Lebanon, the Manakish pizza is basically a form of flatbread.

The bread base is the most consistent ingredient of a pizza; almost every form of pizza around the world begins with some sort of bread.

The bread base, though certainly important, is often overlooked because of the toppings, which vary widely. Many countries use cheese as a topping (namely France, America, Italy, and India). However, some countries use toppings unique to their culture. In Japan, the Okonomiyaki pizza has a variety of seafood toppings, including squid and shrimp. Germany also uses seafood on their Thunfisch, or tuna fish, pizza. Both Sweden and India use curry flavor on their pizza: Indian pizzas often include tikka, a curried chicken, along with pickled ginger, paneer, and vegetables; whereas Swedish pizzas include lots of curry powder with pineapples and bananas. In Turkey, the Lahmacun pizza is primarily just meat and dough. The various toppings and combinations reflect the cultures of various countries by using the foods that are readily available or popular in those places.

There are too many unique and interesting pizzas to discuss, so try the local pizza of wherever you travel next. However, you don’t have to wait until your next trip to try a pizza from around the world. We didn’t want to teach you about all these different pizzas without also giving you (and ourselves) a little taste of some of them, so our staff got together and made a couple different pizzas, and here is what we found:

Directions:
Combine all dough ingredients until smooth dough forms. Let sit while you mix the cheese filling. Combine cheese ingredients. Take half of the dough and roll into an 8-inch circle, about 1/8 inch thick. Spread 1/4 of the cheese onto the circle, leaving a 1/2 inch border. On opposite sides of the circle, roll the two edges of the dough toward each other, leaving 2–3 inches between the rolls. Pinch and twist the two ends to create a boat shape. Place another 1/4 of the cheese in the boat. Repeat to make another pizza with the remaining ingredients. Bake pizzas at 400 degrees for 10–12 minutes or until golden brown. Crack an egg in the center of the boats and bake again for 3–4 minutes or until eggs are fairly set.