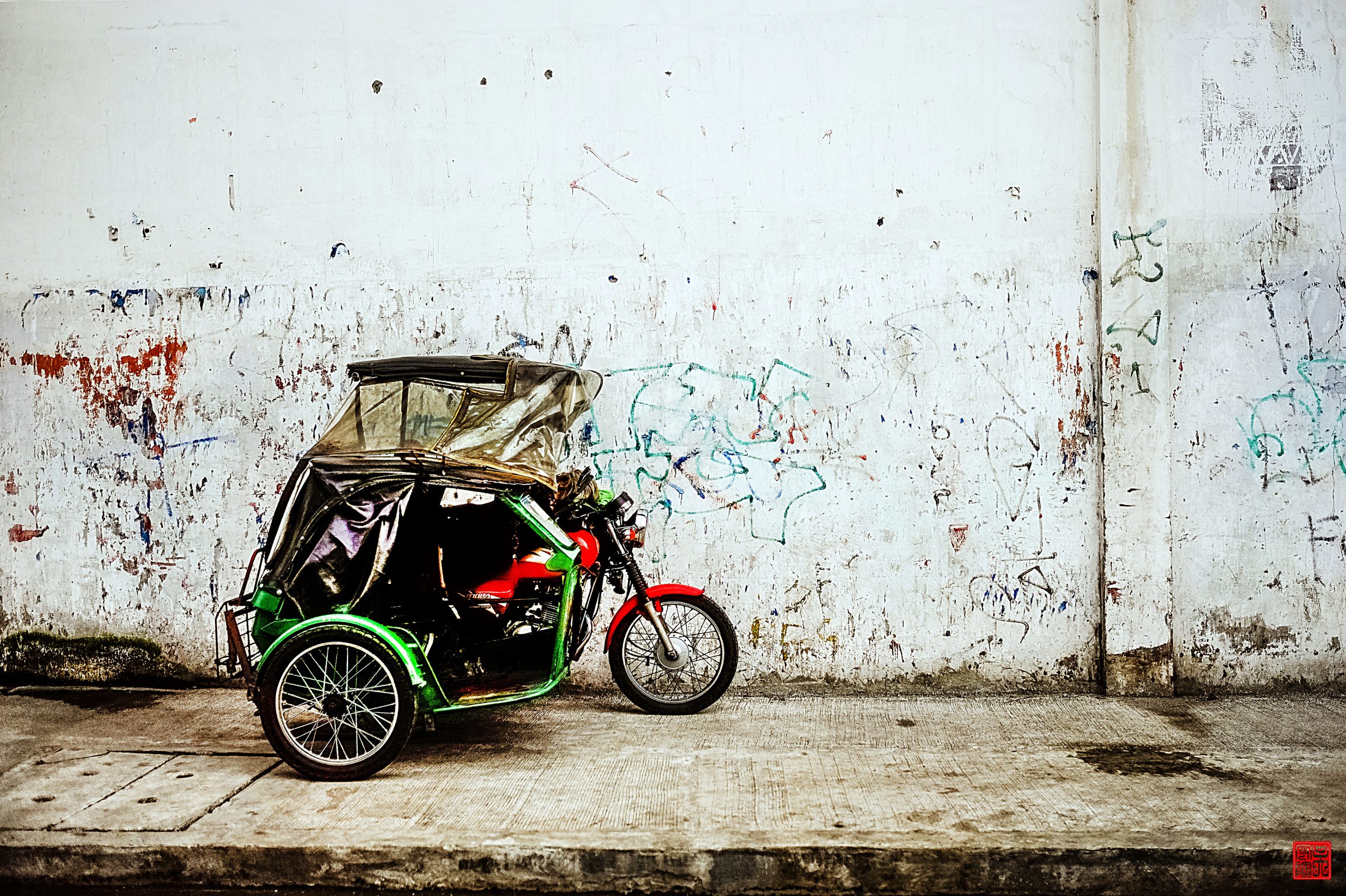 Rain pours down the sides of the umbrella protecting my missionary companion and me. We huddle together, walking over to the tricycles parked at the side of the parking lot waiting for passengers. Each tricycle has a particular destination, and we want one headed to a nicer part of town. We find a promising one with few people and struggle into what serves as the cab.

Once we squish together inside, the driver asks me for the address.

“Pitumpu.” (Seventy pisos.) He sees that I am Kana, or American; he would never try that price with a Philippina.

As we wait, some men climb on top, holding plastic bags on top of their heads to keep off the rain. My knees knock against the legs of the woman sitting across from me. She has a baby in her lap, and she’s holding her daughter tightly next to her. Each of us clutches the closest edge, letting in some of the water through the plastic coverings and shivering from the rain. Two more girls sit on the motorcycle at my back, shivering from the wet.

The driver starts the motorcycle attached to the cart. It chokes a bit, not liking the weather any more than we do. As we speed out, I lean in multiple directions at once against the back of the tricycle and against my missionary companion next to me, pressing my feet against the front of the opposite seat. I almost laugh. At this point, there are twelve people on the tricycle: five on the inside, two sitting behind the driver, the driver himself, one holding on to the opposite side, and three on the roof. Once the tricycle is full, the driver takes off. This is not some kind of circus trick. We are just all trying to get somewhere, and this is the best way of doing it in the Philippines.

Getting somewhere becomes an ordinary adventure in the Philippines, in all three forms of transportation: trisikads, tricycles, and Jeepneys.

Trisikad drivers like this one take children, adults, and animals on short distances. Photograph by Mr. Leeds. cc

A trisikad (or sikad) is a bike with a cab attached to the right side. These are only used for short distances—distances you could walk, but you just don’t want to, either because you aren’t feeling well, you’re carrying something, or you’re just tired. Because it is man-powered, it can only carry two people, or once in a while, three.

Tricycles have a familiar name but are anything but familiar. They are similar to trisikads, but bigger and with a motorcycle instead of a bike. You can fit twelve people on one if you’re lucky. These go further distances (a couple miles) for half-hour or hour rides. Some have designated routes, and others are stopped like taxis by standing by the side of the road and holding up a couple fingers.

Colorful Jeepneys like this one travel the cities of Manila, Baguio and Iloilo. Photograph by Klaus Stiefel. cc

Jeepneys are the biggest and most common form of transportation in the Philippines. Jeepneys were originally made-over US Jeeps from WWII. Now, they are very long vans with long plastic-covered bench seats running along each side. A metal bar is available on the ceiling to grab on around tight corners. There is one open door in the back, and each person bends in half to crawl in. Once inside, each person has to find a spot squished beside all the other people and their spots.

After getting situated, the adventure really begins. Between holding on to one’s bag, leaning against everyone, holding on the bar, and praying very hard, it’s surprising anyone goes anywhere. Keep in mind that this isn’t just an adventure for the idle traveler; it’s life in the Philippines.

“Lugar Lang,” calls out someone from the top of the tricycle, and the driver comes to an abrupt stop, causing all of us to jerk against each other and strain not to fall off. I press my head at an awkward angle against the metal corner and hold myself in position waiting for the next move. Every day it’s the same, and every day it’s an adventure. Once we reach our destination, we pay with pisos and struggle out of the contraption back into the rain.